Students get through the TN Board 11th Bio Botany Important Questions Chapter 1 Living World which is useful for their exam preparation.

Question 1.
Define Biosphere.
Answer:
Earth has formed some 4.6 billion years ago. It is a life-supporting planet with landforms like mountains, plateaus, glaciers, etc., Life on earth exists within a complex structure called the biosphere.

Question 2.
What is the role of the DNA molecule?
Answer:
DNA is essential for the regulation of life and is made up of carbon, hydrogen, oxygen, nitrogen, and phosphorus, and thus nonliving and living things exist together to make our planet unique.

Question 3.
What is consciousness?
Answer:
AH organisms are capable of sensing their environment and respond to various physical, chemical, and biological stimuli. Animals sense their surroundings by sense organs. This is called consciousness.

Question 4.
Explain Prions.
Answer:
Prions were discovered by Stanley B.Prusiner in the year 1982 and are proteinaceous infectious particles. They are the causative agents for about a dozen fatal degenerative disorders of the central nervous system of humans and other animals. For example Creutzfeldt – Jakob Disease (CJD), Bovine Spongiform Encephalopathy (BSE) – commonly known as mad cow disease and scrapie disease of sheep.

Question 5.
What is Plasmid?
Answer:
Plasmids are extrachromosomal double-stranded, circular, self-replicating, autonomous elements. They contain genes for fertility, antibiotic-resistant and heavy metals. It also helps in the production of bacteriocins and toxins which are not found in the bacterial chromosome.

Question 6.
Mention the need for classification?
Answer:
Classification is essential to achieve the following needs:

Question 7.
What is Pili?
Answer:
Pili or fimbriae are hair-like appendages found on the surface of the cell wall of gram-negative bacteria (eg. Enterobacterium). The pili are 0.2 to 20 pm long with a diameter of about 0.025pm. In addition to normal pili, special types of pili that help in conjugation called sex pili are also found.

Question 9.
What are Mycobiont and Phycobiont?
Answer:
The symbiotic association between algae and fungi is called lichens. The algal partner |is called Phycobiont or Photobiont and the fungal partner is called Mycobiont. Algae provide nutrition for fungal partners in turn fungi provide protection and also help to fix the thallus to the substratum through rhizines. Asexual reproduction takes place through fragmentation, Soredia, and Isidia. Phycobionst reproduces by akinetes, hormogonia, aplanospore, etc., Mycobionts undergo sexual reproduction and produce ascocarps.

Question 10.
Define Homeostasis.
Answer:
Property of self-regulation and tendency to maintain a steady-state within an external environment which is liable to change is called Homeostasis. It is essential for the living organism to maintain internal conditions to survive in the environment.

Question 12.
Explain the term Viroid.
Answer:
Viroid is a circular molecule of ssRNA without a capsid and was discovered by T.O.Diener in the year 1971. The RNA of viroid has a low molecular weight. Viroids cause citrus exocytic and potato spindle tuber disease in plants.

Question 13.
What is meant by red tide?
Answer:
Red tide is caused by the toxic bloom of Dinoflagellates like Gymnodinium breve and Gonyaulax tamarensis. A major red tide incident in the west coast of Florida in the year 1982 killed hundreds and thousands of fishes.

Question 18.
Explain the term mycorrhizae.
Answer:
The Symbiotic association between fungal mycelium and roots of plants is called mycorrhizae. In this relationship, fungi absorb nutrition from the root, and in turn, the hyphal network of mycorrhizae forming fungi helps the plant to absorb water and mineral nutrients from the soil.

Question 19.
Name any two fungal diseases of plants and their causative organism.
Answer:

Question 20.
Explain Oomycetes with an example.
Answer:
Coenocytic mycelium is present. The cell wall is made up of Glucan and Cellulose. Zoospore with one whiplash and one tinsel flagellum is present. Sexual reproduction is Oogamous. eg. Albugo.

Question 5.
List out any three methods of sexual reproduction, in fungi.
Answer:

Question 8.
Draw and label the ultrastructure of a bacterial cell.
Answer: 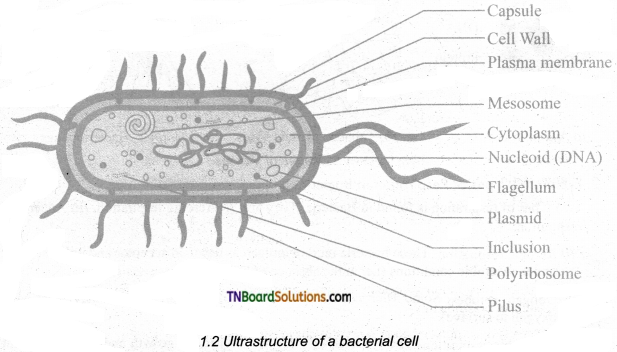 Question 9.
What is meant by Ammonification? Explain the bacteria involved in the process.
Answer:

Question 10.
Explain Actinomycetes with an example.
Answer:
Actinomycetes are also called ‘Ray fungi’ due to their mycelia-like growth. They are anaerobic or facultative anaerobic microorganisms and are gram-positive. They do not produce an aerial mycelium. Their DNA contains high guanine and cytosine content (eg. Streptomyces).

Question 1.
Draw the structure of different types of viruses and explain.
Answer:
Viruses are ultramicroscopic particles. They are smaller than bacteria and their diameter range from 20 to 300 nm (1 nm = 10-9 meters). Bacteriophage measures about 10 – 100 nm in size. The size of TMV is 300 x 20 nm.
Generally, viruses are of three types based on shape and symmetry.

Facultative anaerobes: There are bacteria that can grow either using oxygen as a terminal electron acceptor or anaerobically using fermentation reaction to obtain energy. When a facultative anaerobe such as E. coli is present at a site of infection like an abdominal abscess, it can rapidly consume all available 02 and change to anaerobic metabolism producing an anaerobic environment and thus allow the anaerobic bacteria that are present to grow and cause disease, eg. Escherichia coli and Salmonella.
Capnophilic Bacteria: Bacteria that require CO2 for their growth are called as capnophilic bacteria, eg. Campylobacter. 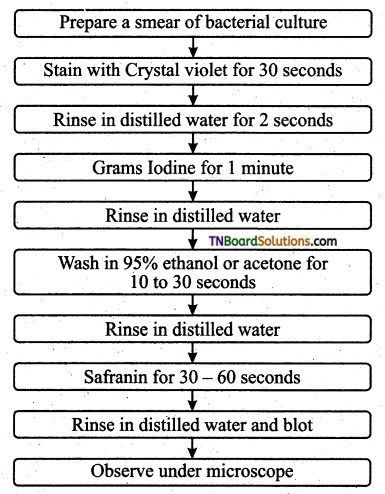 Question 4.
Give a concise account of asexual reproduction in bacteria.
Answer:
Bacteria reproduce asexually by Binary fission, conidia, and endospore formation. Among these Binary fission is the most common one.
Binary fission: Under favorable conditions, the cell divides into two daughter cells. The nuclear material divides first and it is followed by the formation of a simple median constriction which! finally results in the separation of two cells.
Endospores: During unfavorable conditions bacteria produce endospores. Endospores are produced in Bacillus megaterium, Bacillus sphaericus, and Clostridium tetani. Endospores are thick-walled resting spores. During the favorable conditions, they germinate and form bacteria. 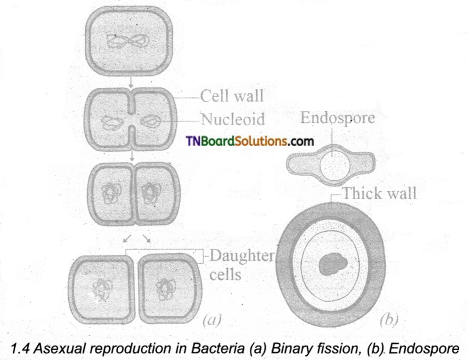 Question 6.
Write an essay on the Beneficial activities of fungi.
Answer:
Fungi provide delicious and nutritious food called mushrooms. They recycle the minerals by decomposing the litter thus adding fertility to the soil. The dairy industry is based on a single-celled fungus called yeast. They deteriorate the timber. Fungi cause food poisoning due to the production of toxins. The Beneficial and harmful activities of fungi are discussed below:
Beneficial activities:

Collect some root nodules of leguminous crops. Draw diagram. Wash, it in tap water and prepare d smear by squeezing the content into a clean slide. Follow the Gram staining method and identify the bacteria.
Answer:
Azotobacter, Clostridium, rhizobium are observed.

Get a button mushroom. Draw a diagram of the fruit body. Take a thin longitudinal section passing through the gill and observe the section under a microscope. Record your observations.
Answer: 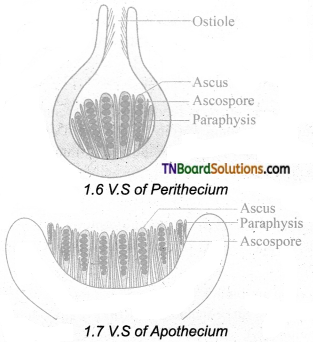 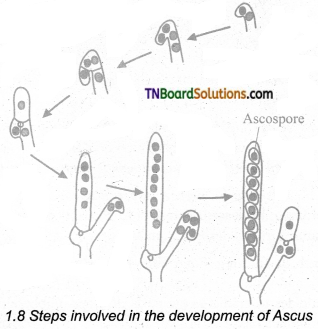 Keep a slice of bread in a clean plastic tray or plate. Wet the surface with little water. Leave the setup for 3 or 4 days. Observe the moldy growth on the surface of the bread. Using .a needle removes some mycelium and place it on a slide and stain the mycelium using lactophenol blue. Observe the mycelium and sporangium under the microscope and Record your observation and identify the fungi and its group based on characteristic features:
The bread mold fungi such as Mucor, Rhizopus can be observed.

I. Choose the correct answer.

9. Which one of the following is a bacterial disease?
(a) Common cold
(b) Cancer
(c) Rabies
(d) Tetanus
Answer:
(d) Tetanus

16. Match the following disease with their pathogen: