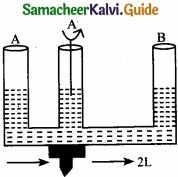 Question 20.
In a dark room would you be able to tell whether a given note had been produced by a Piano or a Violin?
Answer:
Yes, in a dark room we can easily identify a sound produced by a Piano or a Violin by using the knowledge of timber or quality of sound. The two sources even though having the same intensity and fundamental frequency will be associated with different number of overtones of different relative intensities. These overtones combine and produce different sounds which enables us to identify them.

Question 21.
What is mean by P – V diagram?
Answer:
PV diagram is a graph between pressure P and volume V of the system. The P-V diagram is used to calculate the amount of work done by the gas during expansion or on the gas during compression.

Question 24.
Write a note on reverberation?
Answer:
The persistence of audible sound after the source has ceased to emit sound is called reverberation. 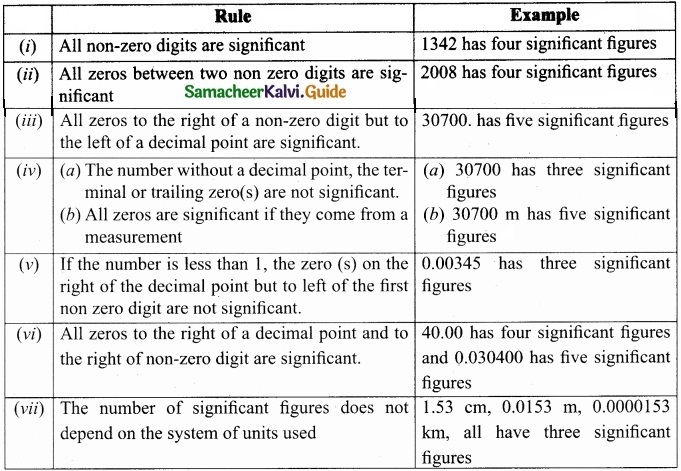 Question 26.
Explain Joule’s experiment of the mechanical equivalent of heat?
Answer:
Joule’s mechanical equivalent of heat:
The temperature of an object can be increased by heating it or by doing some work on it. In the eighteenth century, James Prescott Joule showed that mechanical energy can be converted into internal energy and vice versa. In his experiment, two masses were attached with a rope and a paddle wheel as shown in Figure. When these masses fall through a distance h due to gravity, both the masses lose potential energy equal to 2 mgh.

When the masses fall, the paddle wheel turns. Due to the turning of wheel inside water, frictional force comes in between the water and the paddle wheel. This causes a rise in temperature of the water. This implies that gravitational potential energy is converted to internal energy of water.

The temperature of water increases due to the work done by the masses. In fact, Joule was able to show that the mechanical work has the same effect as giving heat. He found that to raise 1 g of an object by 1°C , 4.186 J of energy is required. In earlier days the heat was measured in calorie. 1 cal = 4.186 J This is called Joule’s mechanical equivalent of heat. 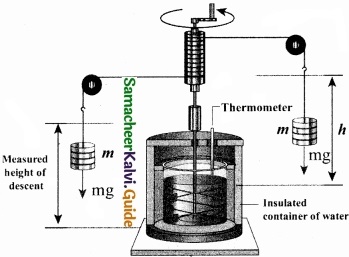 (IV) Dimensionless Constant:
Quantities which have constant values and also have no dimensions are called dimensionless constants. Examples are n, e, numbers etc.

Question 28.
State laws of simple pendulum?
Answer:
Law of length:
For a given value of acceleration due to gravity, the time period of a simple pendulum is directly proportional to the square root of length of the pendulum.
T ∝ \(\sqrt{l}\)

Law of acceleration:
For a fixed length, the time period of a simple pendulum is inversely proportional to square root of acceleration due to gravity.
T ∝ \(\frac { 1 }{ \sqrt { g } } \)

Question 33.
Derive an expression for Laplace’s correction?
Answer:
Laplace’s correction:
In 1816, Laplace satisfactorily corrected this discrepancy by assuming that when the sound propagates through a medium, the particles oscillate very rapidly such that the compression and rarefaction occur very fast. Hence the exchange of heat produced due to compression and cooling effect due to rarefaction do not take place, because, air (medium) is a bad conductor of heat.

Since, temperature is no longer considered as a constant here, sound propagation is an adiabatic process. By adiabatic considerations, the gas obeys Poisson’s law (not Boyle’s law as Newton assumed), which is
PVγ = Constant …………… (4)

Question 34 (a).
Explain different types of error?
Answer:
The uncertainty in a measurement is called an error. Random error, systematic error and gross error are the three possible errors.

(i) Instrumental errors:
When an instrument is not calibrated properly at the time of manufacture, instrumental errors may arise. If a measurement is made with a meter scale whose end is worn out, the result obtained will have errors. These errors can be corrected by choosing the instrument carefully.

(ii) Imperfections in experimental technique or procedure:
These errors arise due to the limitations in the experimental arrangement. As an example, while performing experiments with a calorimeter, if there is no proper insulation, there will be radiation losses. This results in errors and to overcome these, necessary correction has to be applied

(iii) Personal errors:
These errors are due to individuals performing the experiment, may be due to incorrect initial setting up of the experiment or carelessness of the individual making the observation due to improper precautions.

(iv) Errors due to external causes:
The change in the external conditions during an experiment can cause error in measurement. For example, changes in temperature, humidity, or pressure during measurements may affect the result of the measurement.

For example, consider the case of the thickness of a wire measured using a screw gauge. The readings taken may be different for different trials. In this case, a large number of measurements are made and then the arithmetic mean is taken.

(b) By using equations of motion, derive an expression for range and maximum height reached by the object thrown at an oblique angle θ with respect to the horizontal direction?
Answer: 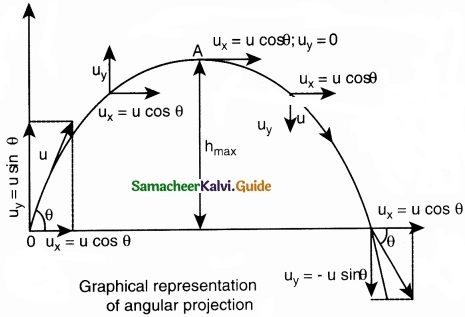 This projectile motion takes place when the initial velocity is not horizontal, but at some angle with the vertical, as shown in Figure.

Since the acceleration due to gravity is in the direction opposite to the direction of vertical component uy, this component will gradually reduce to zero at the maximum height of the projectile.

At this maximum height, the same gravitational force will push the projectile to move downward and fall to the ground. There is no acceleration along the x direction throughout the motion. So, the horizontal component of the velocity (ux = u cos θ) remains the same till the object reaches the ground. 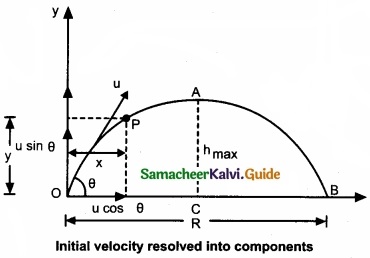 The horizontal range directly depends on the initial speed (u) and the sine of angle of projection (θ). It inversely depends on acceleration due to gravity ‘g’.

To find the resultant of the two vectors we apply the triangular law of addition as follows: Represent the vectors \(\vec { A } \) and \(\vec { B } \) by the two adjacent sides of a triangle taken in the same order. Then the resultant is given by the third side of the triangle as shown in figure. 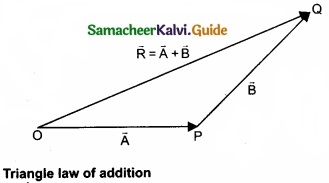 (I) Magnitude of resultant vector:
The magnitude and angle of the resultant vector are determined by using triangle law of vectors as follows.
From figure, consider the triangle ABN, which is obtained by extending the side OA to ON. ABN is a right angled triangle.

(b) Arrive at an expression for velocity of objects in one dimensional elastic collision?
Answer:
Consider two elastic bodies of masses m1 and m2 moving in a straight line (along positive x direction) on a frictionless horizontal surface as shown in figure.

In order to have collision, we assume that the mass m1 moves faster than mass m2 i.e., u1 > u2. For elastic collision, the total linear momentum and kinetic energies of the two bodies before and after collision must remain the same.

Question 36 (a).
Discuss the variation of g with change in altitude and depth?
Answer:
When an object is on the surface fo the Earth, it experiences a centrifugal force that depends on the latitude of the object on Earth. If the Earth were not spinning, the force on the objecf would have been mg. Elowever, the object experiences an additional centrifugal force due to spinning of the Earth. 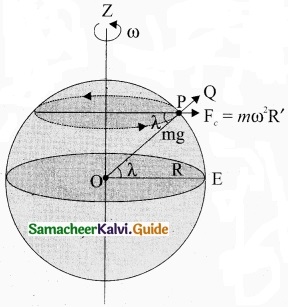 Variation of g with depth:
Consider a particle of mass m which is in a deep mine on the Earth. (Example: coal mines in Neyveli). Assume the depth of the mine as d. To calculate g’ at a depth d, consider the following points. The part of the Earth which is above the radius (Re – d) do not contribute to the acceleration. The result is proved earlier and is given as 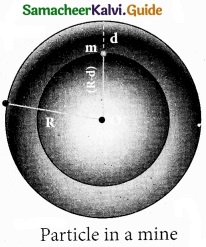 where M is the mass of the Earth and V its volume, Thus, 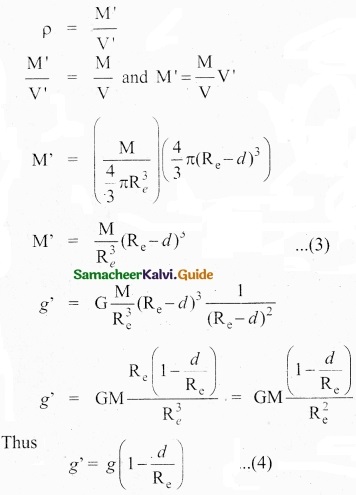 Here also g’ < g. As depth increases, g’ decreases. It is very interesting to know that acceleration due to gravity is maximum on the surface of the Earth but decreases when we go either upward or downward.

(b) Explain in detail the maxwell Boltzmann distribution function?
Answer:
Maxwell-Boltzmann: In speed distribution function:-
Consider an atmosphere, the air molecules-are moving in random directions. The speed of each molecule is not the same even though macroscopic parameters like temperature and pressure are fixed. Each molecule collides with every other molecule and they exchange their speed.

In the previously we calculated the rms speed of each molecule and not the speed of each molecule which is rather difficult. In this scenario we can find the number of gas molecules that move with the speed of 5 ms-1 to 10 ms-1 or 10 ms-1
to 15 ms-1 etc. In general our interest is to find how many gas molecules have the range of speed from v to v + dv. This is given by Maxwell’s speed distribution function. 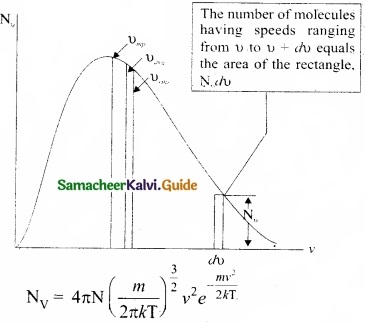 The above expression is graphically shown as follows:

As temperature increases, the peak of the curve is shifted to the right. It implies that the average speed of each molecule will increase. But the area under each graph is same since it represents the total number of gas molecules. 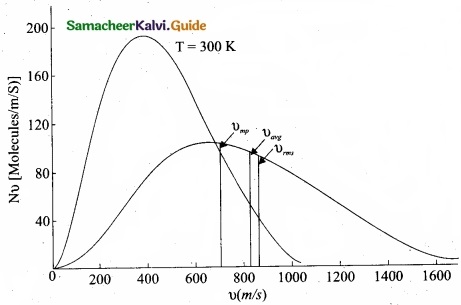 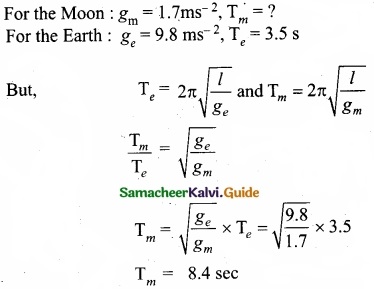 (c) A man with wrist watch on his hand falls from the top of the tower. Does the watch , give correct time during the free fall?
Answer:
Yes. Because the working of a wrist watch does pot depend on gravity at that place but depends on spring action.

Let x0 be the equilibrium position or mean position of mass m when it is left undisturbed. Suppose the mass is displaced through a small displacement x towards right from its equilibrium position and then released, it will oscillate back and forth about its mean position x0. Let F be the restoring force (due to stretching of the spring) which is proportional to the amount of displacement of block. For one dimensional motion, . mathematically, we have.
F ∝ x
F = -kx ……………… (1)

This is not always true; in case if we apply a very large stretching force, then the amplitude of oscillations becomes very large (which means, force is proportional to displacement containing higher powers of x) and therefore, the oscillation of the system is not linear and hence, it is called non-linear oscillation.

We restrict ourselves only to linear oscillations throughout our discussions, which means Hooke’s law is valid (force and displacement have a linear relationship). From Newton’s second law, we can write the equation for the particle executing simple harmonic motion. 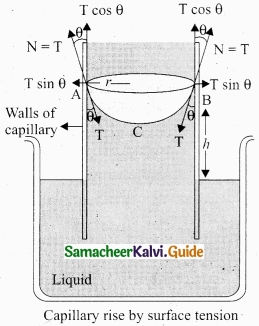 Surface Tension by capillary rise method:
The pressure difference across a curved liquid air interface is the basic factor behind the rising up of water in a narrow tube (influence of gravity is ignored). The capillary rise is more dominant in the case of very fine tubes.

The surface tension force FT acts along the tangent at the point of contact downwards and its reaction force upwards. Surface tension T, it resolved into two components

where θ is the angle of contact, r is the radius of the tube. Let ρ be the density of water and h be the height to which the liquid rises inside the tube. Then,

The upward force supports the weight of the liquid column above the free surface, therefore,