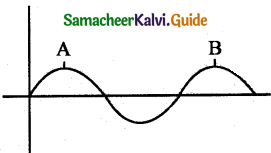 The time period is the time taken by a particle to return to B.

Question 7.
The time period for small vertical oscillations of block of mass m when the masses of the pulleys are negligible and spring constant k1 and k2 is: 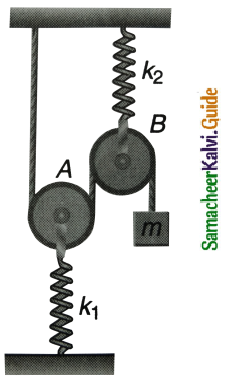 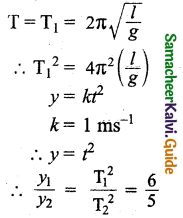 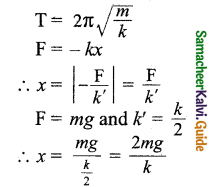 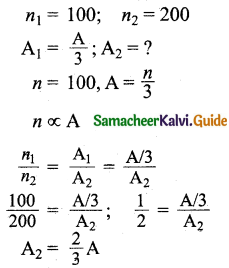 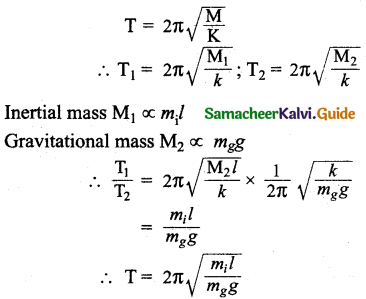 Question 2.
What is meant by the force constant of a spring?
Answer:
Force constant is defined as force per unit length.

Question 3.
Define the time period of simple harmonic motion.
Answer:
The time period is defined as the time taken by a particle to complete one oscillation. It is usually denoted by T.

Question 4.
Define frequency of simple harmonic motion.
Answer:
The number of oscillations produced by the particle per second is called frequency. It is denoted by f. SI unit for frequency is s-1 or hertz (Hz).
Mathematically, frequency is related to time period by f = \(\frac{1}{\mathrm{T}}\)

Question 6.
Write short notes on two springs connected in series.
Answer:
Let us consider two springs whose spring constant are k1 and k2 and which are connected to a mass m as shown in Figure. 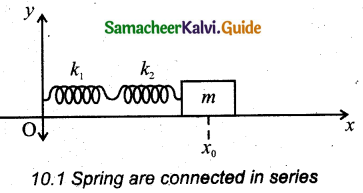 Let F be the applied force towards right as shown in Figure. The net displacement of the mass point is
x = x1 + x2
From Hooke’s law, the net force,
F = – ks(x1 + x2)
The effective spring constant can be calculated as

When n springs connected in series, the effective spring constant in series is

Question 7.
Write short notes on two springs connected in parallel.
Answer:
Let us consider only two springs of spring constants k1 and k2 attached to a mass m as shown in Figure. 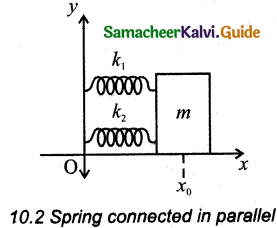 Depends on the following laws:
(i) Law of length: For a given value of acceleration due to gravity, the time period of a simple pendulum is directly proportional to the square root of length of the pendulum.
T ∝ \(\sqrt{l}\) … (1)

(ii) Law of acceleration: For a fixed length, the time period of a simple pendulum is inversely proportional to the square root of acceleration due to gravity.
T ∝ \(\frac{1}{\sqrt{g}}\) … (2)

Question 11.
What is meant by free oscillation?
Answer:
The oscillations in which the amplitude decreases gradually with the passage of time are called damped Oscillations.
Example:

Question 13.
Define forced oscillation. Give an example.
Answer:
The body executing vibration initially vibrates with its natural frequency and due to the presence of external periodic force, the body later vibrates with the frequency of the applied periodic force. Such vibrations are known as forced vibrations.
Example: Soundboards of stringed instruments.

Question 14.
What is meant by maintained oscillation? Give an example.
Answer:
To avoid damping in an oscillation, energy is supplied from an external source, the amplitude of the oscillation can be made constant. Such vibrations are known as maintained vibrations.

Example:
The vibration of a tuning fork getting energy from a battery or from an external power supply.

Question 15.
Explain resonance. Give an example.
Answer:
The frequency of external periodic force (or driving force) matches with the natural frequency of the vibrating body (driven). As a result, the oscillating body begins to vibrate such that its amplitude increases at each step and ultimately it has a large amplitude. Such a phenomenon is known as resonance and the corresponding vibrations are known as resonance vibrations. Example: The breaking of glass due to sound

Example: Oscillation of a pendulum. SHM is a special type of periodic motion, where restoring force is proportional to the displacement and acts in the direction opposite to displacement.

Question 2.
Describe Simple Harmonic Motion as a projection of uniform circular motion.
Answer:
(i) Let us consider a particle of mass m moving with uniform speed v along the circumference of a circle whose radius is r in an anti-clockwise direction (as shown in Figure).

(ii) It is assumed that the origin of the coordinate System coincides with the center 0 of the circle.

(iv) This means that we can associate a map (or a relationship) between uniform circular (or revolution) motion to vibratory motion.

(v) Conversely, any vibratory motion or revolution can be mapped to uniform circular motion. The position of a particle moving is projected on to its vertical diameter or on to a line parallel to vertical diameter.

Example: Let us consider a spring-mass system (or oscillation of pendulum) as shown in Figure. When the spring moves up and down (or pendulum moves to and fro), the motion of the mass or bob is mapped to points on the circular motion. 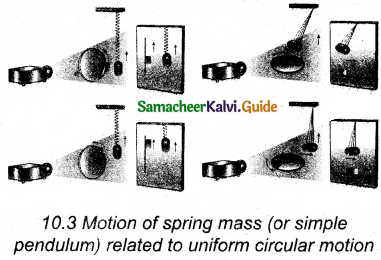 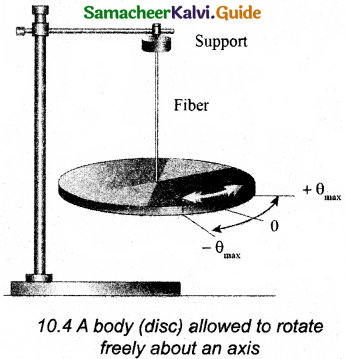 Question 5.
Discuss the simple pendulum in detail.
Answer:
Construction:
A pendulum is a mechanical system which exhibits periodic motion. It has a bob with mass m suspended by a massless and inextensible string. The other end is fixed on a stand as shown in Figure (a). At equilibrium, the pendulum does not oscillate and is suspended vertically downward. 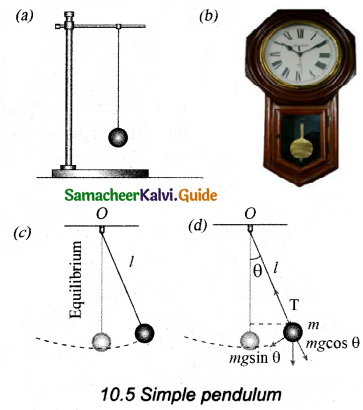 Calculation of time period: Let l be the length of the pendulum which is taken as the distance between the point of suspension and the centre of gravity of the bob. Two forces act on the bob of the pendulum at any displaced position, as shown in Figure (d),

Resolving the gravitational force into its components:

Hence, the normal component of the force is, along the string,
T – Was = m\(\frac{v^{2}}{l}\)
Here v is speed of bob
T – mg cosθ = m\(\frac{v^{2}}{l}\) … (1)
From the Figure, it is observed that the tangential component Wps of the gravitational force always points towards the equilibrium position. This direction always points opposite to the direction of displacement of the bob from the mean position. Hence, in this case, the tangential force is the restoring force. Applying Newton’s second law along tangential direction, we have 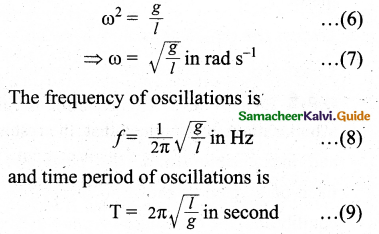 Question 6.
Explain the horizontal oscillations of a spring.
Answer: 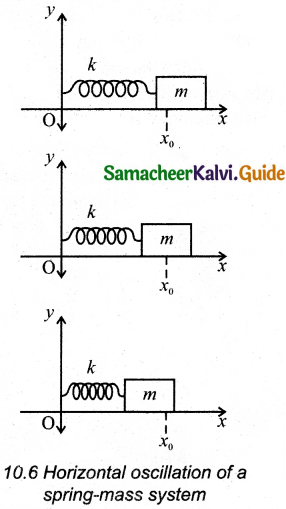 Let us consider a system containing a block of mass m fastened to a massless spring with stiffness constant or force constant or spring constant k placed on a smooth horizontal surface (frictionless surface) as shown in Figure. Let x0 be the equilibrium position or mean position of mass m when it is left undisturbed.

Question 7.
Describe the vertical oscillations of a spring.
Answer:
Consider a massless spring with stiffness constant or force constant k attached to a ceiling as shown in Figure. Let the length of the spring before loading mass m be L. If the block of mass m is attached to the other end of the spring, then the spring elongates by a length l. Let F1 be the restoring force due to the stretching of spring. Due to mass m, the gravitational force acts vertically downward. A free-body diagram is drawn for this system as shown in Figure. When the system is under equilibrium, 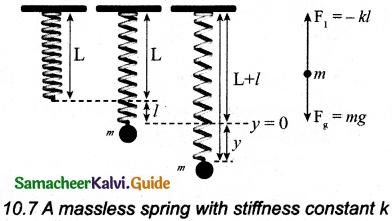 Question 8.
Write short notes on the oscillations of the liquid column in U-tube.
Answer:
Let us consider a U-shaped glass tube which consists of two open arms with uniform cross¬sectional area A. Let us pour a non-viscous uniform incompressible liquid of density p in the U-shaped tube to a height h as shown in the Figure. If the liquid and tube are not disturbed then the liquid surface will be in equilibrium position O. 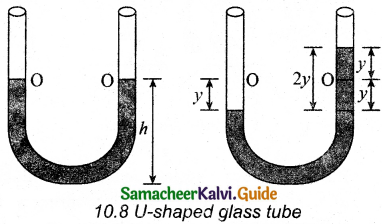 It means the pressure as measured at any point on the liquid is the same and also at the surface on the arm (edge of the tube on either side), that balances the atmospheric pressure. Hence, the level of liquid in each arm will be the same. By blowing air one can provide sufficient force in one arm, and the liquid gets disturbed from equilibrium position O, It is meant, that pressure at blown arm is higher than the other arm.

A difference in pressure is created that will cause the liquid to oscillate for a very short duration of time about the mean or equilibrium position. Finally, it comes to rest.
Time period of the oscillation is
T= 2π \(\sqrt{\frac{l}{2g}}\)second 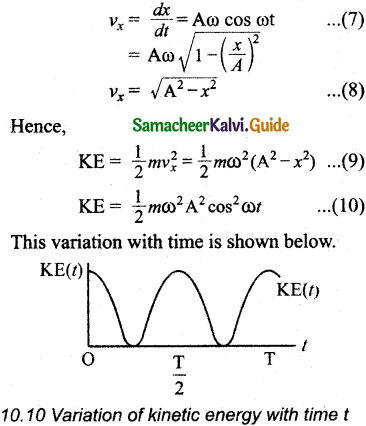 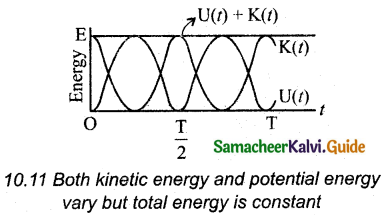 Example:
The vibration of a tuning fork getting energy from a battery or from external power supply.

Question 1.
Consider the Earth as a homogeneous sphere of radius R and a straight hole is bored in it through its centre. Show that a particle dropped into the hole will execute a simple harmonic motion such that its time Period is T = 2π\(\sqrt{\frac{\mathrm{R}}{g}}\)
Answer: 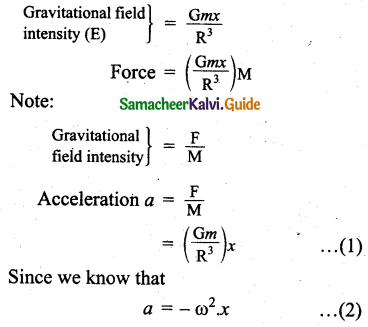 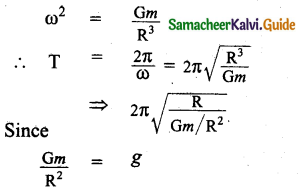 Question 2.
Calculate the time period of the oscillation of a particle of mass m moving in the potential defined as
Answer: 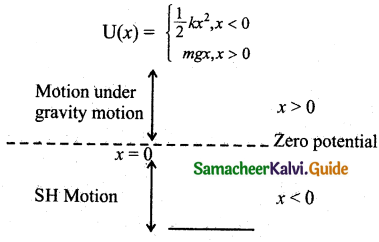 Note:
We want to find the total time period, which will be T = t1 + t2.
According to the conservation of energy 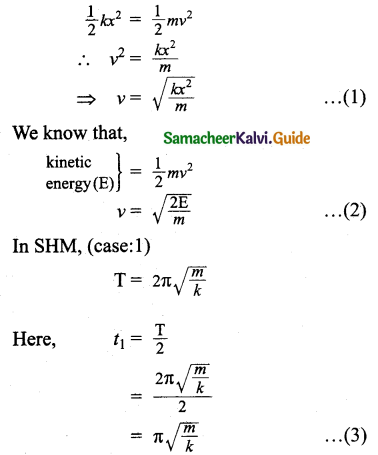 Question 3.
Consider a simple pendulum of length l = 0.9 m which is properly placed on a trolley rolling down on a inclined plane which is at θ = 45° with the horizontal. Assuming that the inclined plane is frictionless, calculate the time period of oscillation of the simple pendulum.
Answer:
The effective value of acceleration due to gravity (g) will be equal to the component of g normal to the inclined plane which is
g’ = g cos α
T = 2π\(\sqrt{\frac{l}{g^{\prime}}}\) = 2π\(\sqrt{\frac{l}{g \cos \theta}}\)
Length of the pendulum l = 0.9m
Angle of inclination θ = 45° 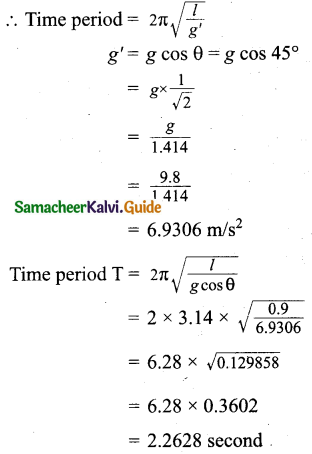 Question 4.
A piece of wood of mass m is floating erect in a liquid whose density is ρ. If it is slightly pressed down and released, then executes simple harmonic motion. Show that its time period of oscillation is T = 2π\(\sqrt{\frac{m}{\mathrm{Ag} \rho}}\)
Answer:
When a wood is pressed and released, 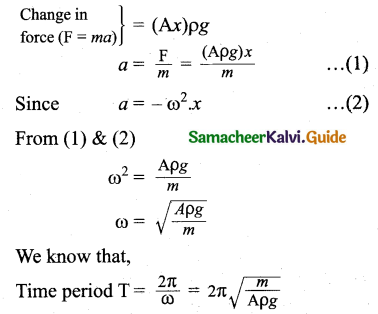 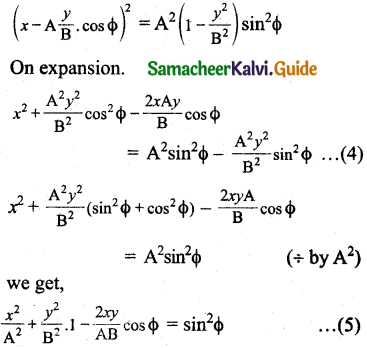 The above equation resembles equation of a straight line passing through origin with positive slope.

The above equation is an equation of a straight line passing through origin with a negative slope. 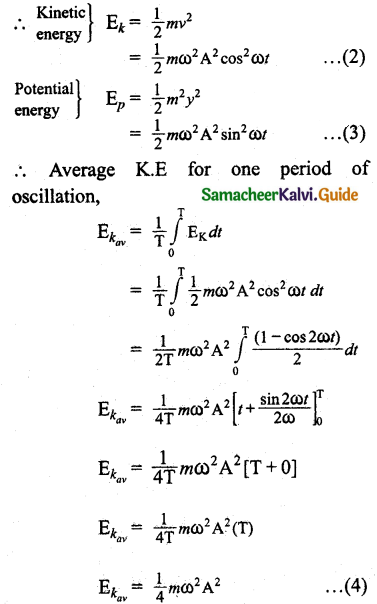 Average potential energy over a period of oscillation is, 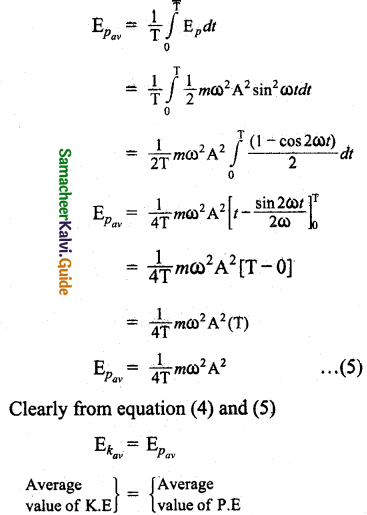 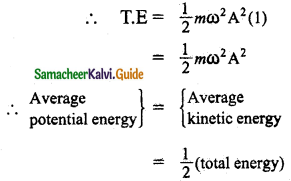 Question 7.
Compute the time period for the following system if the block of mass m is slightly displaced vertically down from its equilibrium position and then released. Assume that the pulley is light and smooth, strings and springs are light.
Answer:

Case (a):
When mass is slightly displaced vertically down: Now pulley is fixed rigidly here. When the mass is displaced by y and the spring will also be stretched by y.
Hence F = ky
Time period T = \(\sqrt{\frac{m}{k}}\)