I. Choose The Best Options

Question 2.
Which one of the following plasma proteins is involved in the coagulation of blood?
a. Globulin
b. Fibrinogen
c. Albumin
d. Serum amylase
Answer:
b. Fibrinogen

Question 3.
Which of the following WBCs are found in more numbers?
a. Eosinophil
b. Neutrophil
c. Basophil
d. Monocyte
Answer:
b. Neutrophil

Question 4.
Which of the following is not involved in blood clotting?
a. Fibrin
b. Calcium
c. Platelets
d. Bilirubin
Answer:
d. Bilirubin

Question 7.
A person having both antigen A and antigen B on the surface of RBCs belongs to blood group
a. A
b. B
c. AB
d. O
Answer:
c. AB

Question 11.
An unconscious patient is rushed into the emergency room and needs a fast blood transfusion. Because there is no time to check her medical history or determine her blood type, which type of blood should you as her doctor, give her?
a. A
b. AB
c.  Q+ve
d. O –ve
Answer:
d. O –ve

Question 18.
Distinguish between the mitral valve and semilunar valve.
Answer:

Question 21.
Describe the mechanism by which the human heartbeat is initiated and controlled.
Answer: 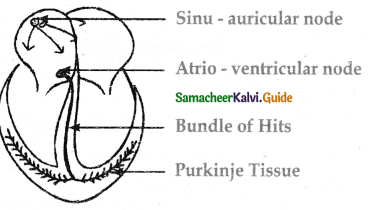 Question 22.
What is lymph? Write its function.
Answer:
About 90% of the fluid that leaks from capillaries eventually seep back into the capillaries and the remaining 10% is collected and returned to the blood system by me of a series of tubules known as lymph vessels or lymphatics.

The fluid inside the lymphatics is called lymph. The lymphatic system consists of a complex network of thin-walled ducts (lymphatic vessels), filtering bodies (lymph nodes), and a large number of lymphocytic cell concentrations in the various lymphoid organisms.

The lymphatic vessels have smooth walls that run parallel to the blood vessels, in the skin, along the respiratory and digestive tracts. These vessels serve as return ducts for the fluids that are continually diffusing out of the blood capillaries into the body tissues.

Lymph fluid must pass through the lymph nodes before it is returned to the blood. The lymph nodes that filter the fluid from the lymphatic vessels of the skin are highly concentrated in the neck, inguinal, axillaries, respiratory and digestive tracts.

The lymph fluid flowing out of the lymph nodes flows into large collecting duct which finally drains into larger veins that run beneath the collar bone, the subclavian vein, and is emptied into the bloodstream. The narrow passages in the lymph nodes are the sinusoids that are lined with macrophages.

The lymph nodes successfully prevent the invading microorganisms from reaching the bloodstream. Cells found in the lymphatics are lymphocytes. Lymphocytes collected in the lymphatic fluid are carried via the arterial blood and are recycled back to the lymph. Fats are absorbed through lymph in the lacteals present in the villi of the intestinal wall. 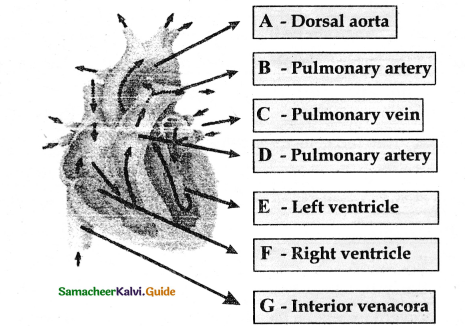 I. Choose The Best Options

Question 1.
How much time is taken by the 1ml blood passes from the heart to reach upto the feet and returns to the heart again.
a. 60 seconds
b. 62 seconds
c. 72 seconds
d. 80 seconds
Answer:
a. 60 seconds

Question 3.
Where is urea synthesised in a man?
a. Spleen
b. Kidney
c. Liver
d. Pan crease
Answer:
c. Liver

Question 5.
Which is considered to be the graveyard of RBCs?
a. Liver
b.Spleen
c. Kidney
d. Bone marrow
Answer:
b.Spleen

Question 12.
Name the substance that prevents coagulation in the small blood vessels.
a. Serum
b. Heparin
c. Serotonin
d. Histamines
Answer:
b. Heparin

Question 22.
Which one of the following is correct in relation to rheumatoid heart disease?
a. Fibrous nodules on the mitral valve
b. Fibrosis
c. Accumulation of fluid in the pericardial cavity
d. All the above
Answer:
d. All the above

Answer:
b. The ‘P’ wave represents the functions of the auricle

Question 1.
What are the types of body fluids?
Answer:

Question 4.
What are the components of blood?
Answer:

Question 5.
Why is spleen considered as a graveyard of red blood cells?
Answer:

Question 6.
What is hematocrit?
Answer:
The ratio of red blood cells to blood plasma is expressed as hematocrit (packed cell volume).

Question 7.
What are the types of lymphocytes? What are its uses?
Answer:

Question 8.
Classify the monocytes based on its location?
Answer:

Question 9.
What are the types of ‘ABO’ blood groups?
Answer:

Question 10.
What is meant by alleleic genes?
Answer:
The gene that regulates the synthesis of A, B and O blood groups in ‘ABO’ type.

Question 11.
What are agglutinogens? What is it’s composition?
Answer:
Antigens present on the surface of RBCs are called agglutinogens.

Question 12.
What are the steps to be taken to prevent erythroblastosis f oetalis?
Answer:
After the first delivery if the first child is the Rh+ve, we should give anti D – antibodies -Rhocum to the
Rh-ve mother.

Question 13.
What is serum?
Answer:
Plasma without fibrinogen is called serum.

Question 15.
What are the layers of blood vessels
Answer:

Question 16.
Give notes on capillaries.
Answer:

Question 17.
What is meant by single circulation?
Answer:

Question 19.
What is meant by complete double circulation?
Answer:

Question 21.
What is meant by cardiac output?
Answer:
The amount of blood pumped out by each ventricle per minute is called the cardiac output.

Question 22.
What is meant by pulse or pulse rate?
Answer:
The rate of heartbeat per minute is called a pulse.

Question 24.
What is meant by stroke volume?
Answer:
Stroke volume is the volume of blood pumped out by one ventricle with each beat.
CO = HR x SV

Question 25.
When will the stroke volume double?
Answer:

Question 29.
What is myogenic heart ?
Answer:
The heart beat of man is originated from the cardiac muscles. Hence human heart is a myogonic heart.

Question 31.
What is edema?
Answer:
The concentration of proteins in the blood becomes much lower than usual leads to the accumulation of fluid.

Question 32.
The walls of arteries nearer to the heart are more elastic than the arteries away from the heart? Why?
Answer:

Question 33.
How is the blood needed for the skeletal muscle during exercise compensated?
Answer:

Question 34.
Define Laplace law? What do you infer from this?
Answer:

Question 1.
List the characteristics of the circulatory system?
Answer: 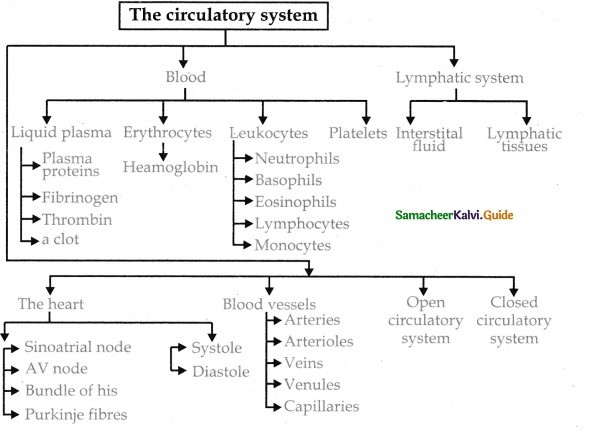 Question 2.
Give notes on plasma?
Answer:

Question 4.
Give notes on platelets?

Question 5.
Arrange the blood groups, their antigens and antibodies and tabulate them.
Answer:

Question 6.
What is anastomoses?
Answer:

2. The heart normally beats 70 – 72 times per min in a normal adult. Lub and dub sound is produced. These are heart sounds.

4. The heart sounds can be heard through a stethoscope.

5. These sounds are of clinical diagnostic significance.

Question 9.
What is blood pressure?
Answer:

2. CPR includes rescue of breath which is achieved by mouth to mouth breathing to deliver oxygen to the victim’s lungs by external chest compression which helps to circulate blood to the vital organs.

3. CPR must be performed within 4 to 6 minutes. Brief electric shock is given to the heart to recover the function of the heart (defibrillation).

Question 14.
What is meant by varicose veins?
Answer:

Question 17.
Write notes on stroke and Angina pectoris?
Answer:
Stroke:
Stroke is a condition when the blood vessels in the brain bursts or when there is a block in the artery that supplies the brain. The part of the brain tissue that is supplied by this damaged artery dies due to lack of oxygen, (cerebral infarction)

Angina Pectoris:
If Atheroma may partially block the coronary artery and reduce the blood supply to the heart. As a result, there is tightness or choking with difficulty in breathing.
This leads to angina or chest pain. It lasts for a short duration of time.
reduces the blood flow.

Question 20.
What is an aneurysm?
Answer:

I Granulocytes:
a) Neutrophils:

II A granulocytes:
a) Lymphocytes:

Question 3.
What is coagulation of blood?
Answer:
The mechanism by which excessive blood loss is prevented by the formation of clot is called blood coagulation.

The threads of fibrins become interlinked into a patch that traps blood cell and seals the injured vessel and prevent blood loss.

Question 4.
Give an account of composition of lymph and explains about its significances?
Answer: 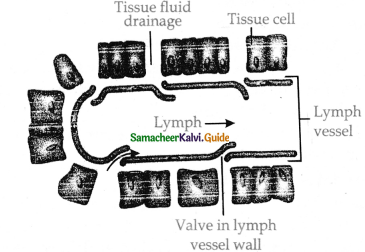 Question 5.
Describe the structure of heart with a diagram?
Answer: 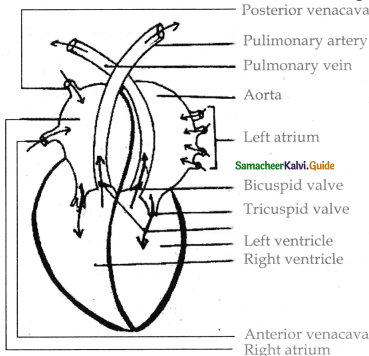 Question 6.
Describe the functioning of heart with a diagram or Describe about the cardiac cycle?
Answer: 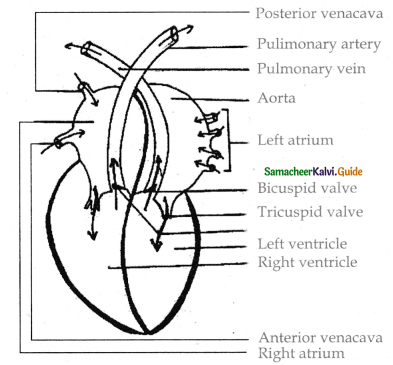 Phase I:
Ventricular diastole – During this phase the blood pressure increases AV valves are opened and the semi lunar valves are closed. Blood flows from the auricles into the ventricles passively.

Phase II:
During atrial systole the ventricle is in relaxed position. The contraction of the auricles pushes maximum volume of blood to the ventricles.
The end diastolic volume is related to the length of the cardiac muscle fibre. More the muscle is stretched greater the EDV and the stroke volume.

Phase III:
Ventricular systole – During this phase the ventricular pressure increases and the AV value closes.
The blood is pumped from the ventricles into the aorta.

Phase IV:
Ventricular systole – During this phase the ventricular pressure increases that forces semi lunar valve to open.
Blood is ejected out of the ventricles without back flow of blood.
This point is the end of systolic volume.

Phase V:
Ventricular diastole – The ventricles begins to relax pressure in the arteries exceeds ventricular pressure resulting in the closure of semilunar valves.
The heart returns to phase I of the cardiac cycle.

Question 7.
How is regulation of cardiac activity taking place?
Answer: