Question 1.
What is globalization?
Answer:
Globalization is the process of integrating various economies of the world without creating any barriers in the free flow of goods and services, technology, capital and even labour or human capital.

Question 4.
Short note: The Dutch in South India.
Answer:
Dutch East India company was formed in 1602. Dutch established factories at Masulipatnam, Pettapoli, Devanampattinam and with the help of King of Chandragiri Pulicut factory also. The commodities exported by the Dutch were Indigo, Saltpeter, Bengal raw silk. They captured Nagapatnam from Portuguese in 1659.

Question 6.
What is fair trade?
Answer:
Fair trade is a way of doing business that ultimately aims to keep small farmers an active part of the world market and aims to empower consumer to make purchases that support their values.

Question 9.
Write short note on TRIPs and TRIMs.
Answer:
TRIPs – Trade Related aspects of Intellectual Property Rights – is an international legal agreement between all the member nations of the World Trade Organisation (WTO). It sets down minimum standards for the regulation by national Governments of many fonns of intellectual property as applied to nationals of other WTO member nations. TRIPs was negotiated at the end of the Uruguay Round of the General Agreement on Tariffs and Trade (GATT) between 1989 and 1990 and is administered by the WTO.

TRIMS – Trade Related Investment Measures – The Uruguay Round Agreement on TRIMs referes to certain conditions or restrictions imposed by a Government in respect of foreign investment in the country in order to give adequate provisions for the home industries to develop.

These Pre-modem phases of global exchange are called Archaic Globalization.

Proto Globalization: It arose because of the rise of maritime European empires in the 16th and 17th Centuries, the Portuguese, Spanish, Dutch and British empires. In the 17th century, the British East India company is described as the first Multinational Company and the Dutch East India company were established.

Modern Globalization: It is witnessed between 19th and 20th century. In the 19th century – Global trade and capital investment. In the 20th century, higher share of trade in merchant production, Global trade in services, Rise in production and trade by MNCs and Technological changes. Agreements of trade contracts like the General Agreement on Tariffs and Trade (GATT) and World Trade Organisation (WTO). Technological changes lowered the cost of transport charges.

Question 2.
Briefly explain the evolution of MNC and its advantages and disadvantages.
Answer:
Multinational companies first started their activities in the extractive industries and controlled raw materials in the host countries during 1920s and then entered the manufacturing and service sectors after 1950s. Most of the MNCs at present belong to the four major exporting countries i.e., USA, UK, France and Germany. However, the largest is America. In 1971, the American Corporations held 52% of the total world stock of foreign direct inverstment. Great Britain held 14.5% followed by France 5% and Federal Republic of Germany 4.4% and Japan 2.7%.
Advantages of MNCs:

Question 3.
Explain the trade and traders in South India.
Answer:

Question 4.
Write about the World Trade Organisation.
Answer:
The World Trade Organisation or WTO is the only global international organisation dealing with the rules of trade between nations. At its heart are the WTO agreements, negotiated and signed by the bulk of the world’s trending nations and satisfied in their Parliaments. The WTO began operations on January 1, 1995 after the completion of the Uruguay Round (1986-94) of Multi lateral trade negotiations.
WTO has six key objectives

(a) Traders and make it as an album: Student can access to google and search by typing” ancient South Indian Traders” images and collect the relevant information.

Silk route map: The silk route was an ancient network of trade routes that connected the East and the West connecting Asia, Europe and Africa. It was mainly used to transport silk.

Spice route map: Spice route is the name as spices were traded with a way of sea route. Spices such as cinnamon, ginger, pepper, turmeric etc. Traded between Asia, Europe and Africa. 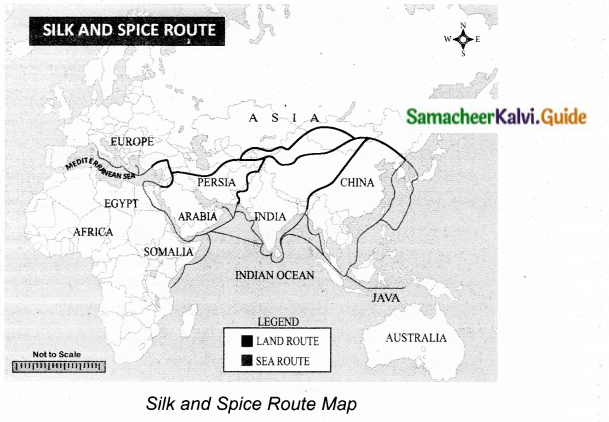 Kalinga route map: Trade routes of Kalinga sailors. They used to trade along their South West voyage along the East Coast of India. Their boats used to sail from Mahanadhi to Bali and right upto Nagapattinam in Cauvery delta. Also they sail along the East coast of Srilanka. 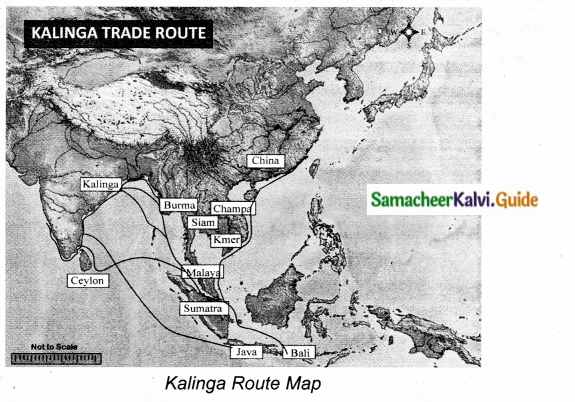 Question 3.
The term ………………… refers to the integration of the domestic economy with the rest of the world.
(a) Privatisation
(b) Liberalisation
(c) Globalization
(d) World trade
Answer:
(c) Globalization

Question 8.
Which one of the following is not an MNC?
(a) Reebok shoes
(b) SAIL
(c) Infosys
Answer:
(b) SAIL

Question 13.
South India trade ………………… were formed by merchants in order to organize and expand their trade activities.
(a) routes
(b) guilds
(c) organisation
(d) Both (b) and (c)
Answer:
(b) guilds

Question 21.
Pondicherry was the headquarters of the
(a) British
(b) Spanish
(c) French
(d) Dutch
Answer:
(c) French

Question 22.
Initially Pondicherry was captured by the ………………… and later handed over to the French.
(a) British
(b) Dutch
(c) Spaniards
(d) Sultan of Golconda
Answer:
(b) Dutch

Question 39.
TRIMs refers to certain ………………… imposed by the government in respect of foreign investment of a country.
(a) Conditions
(b) Control
(c) Restrictions
(d) All the above
Answer:
(d) All the above

Question 1.
What is the Foreign Contribution (Regulation) Act, 2010?
Answer”
The Foreign Contribution (Regulation) Act or FCRA, 2010 has been enacted the Parliament to consolidate the law to regulate the acceptance and utilisation of Foreign contributions or foreign hospitality by certain individuals or associations or companies and to prohibit acceptance and utilisation of foreign contribution or foreign hospitality for any activities detrimental to national interest and for matters connected therewith or incidental thereto.

Question 2.
How did India’s NEP emerged?
Answer:
When India was facing a down grading economic crisis situation, the government presented a budget in July 1991 for 1991-92 with a series of policy changes which underlined liberalization, privatization and globalization. This has come to be called as India’s New Economic policy.

Question 3.
What came to be known as India’s new economic policy? How was this policy strengthened?
Answer:
With the downgrading of India’s credit rating by some international agencies, these was heavy flight of capital out of India. The Government has to mortgage 40 tons of gold to the Bank of England. Under these circumstances, the Government for 1991-92 presented its budget in July 1991 with a series of policy changes which underlined globalization, liberalisation and privatisation. This has come to be called as India’s new economic policy.

Question 5.
How are producers beneficiaries of fair trade?
Answer:
For producers fair trade is unique in offering four important benefits.

Question 6.
Write any type of subsidies the WTO offers to its member countries?
Answer:

Question 7.
What was the idea behind developing SEZ in India?
Answer:
To attract foreign companies to invest in India.

Question 1.
What is fair trade? Who are the beneficiaries of fair trade practices? How?
Answer:
Fair trade is an industrial arrangement designed to help producers in developing countries achieve better trading conditions. Fair trade is about better prices, decent working conditions and fair terms of trade for fanners and workers.
With fair trade, everyone is the beneficiary. Take examples of consumers, traders and producers.
(i) Consumers – Fair trade relationship provide the basis for connecting producers with consumer and for informing consumers of the need for social justice and the opportunities for change. Consumer support enables fair trade organisation to be advocates and campaigners for wider reform of international trading rules, to achieve the ultimate goal of a just and equitable global trading system. Shoppers can buy products in line with their values and principles. They can choose from an ever growing range of great products.

(ii) Traders / Companies – Since its launch in 2002, the fair trade mark has become the most widely, recognised social and development label in the world. Fair trade offers companies a credible way to ensure that their trade has a positive impact for the people at the end of the chain.

(iii) Producers – For producers fair trade is unique in offering important benefits:
(a) stable prices that cover the costs of sustainable production,
(b) market access that enables buyers to trade with producers who would otherwise be excluded from market,
(c) partnership
(d) empowerment of farmers and workers.

Question 2.
Write a note on the beneficiaries of Fair Trade practices.
Answer:
Fair Trade is about better prices, decent working conditions and fair terms of trade for farmers and workers.

Question 3.
What are the factors that multinational companies take into account before setting up a factory in different countries?
Answer:
Before setting up a company or a factory, an MNC takes into account the following things:
(i) Availability of cheap labour and other resources:
MNC’s setup offices and factories for production in various regions of the world, where cheap labour and other resources are available in order to earn greater profit.

(iii) Favourable Government Policy:
If the Government Policies are favourable, it helps MNC’s. For example: Flexibility of labour laws will reduce cost of production. MNC’s are able to hire worker on casual and contractual wages for a short period instead of a regular basis. This reduces the cost of labour for the company and increases its margin of profit.

Question 4.
What are the reasons for the growth of MNC?
Answer:
Expansion of Market: For a large size firm, when its activities expand more and more , it goes beyond their country’s boundary and move to other countries market.