Students get through the TN Board 12th Economics Important Questions Chapter 1 Introduction to Macro Economics which is useful for their exam preparation.

Question 3.
Write a note on the following:
Answer:

Question 4.
Write a note on the Economy, or What do you mean by the economy? or Define Economy.
Answer:
An economy is referred to any system or area where economic activities are carried out.

Question 9.
What does the economic system refer to?
Answer:
Economic systems refer to the manner in which individuals and institutions are connected together to carry out economic activities in a particular area.

Question 11.
What does mixedism denote?
Answer:
Mixedism denotes the co-existence of capitalism and socialism.

Question 12.
Name the countries which are examples of a capitalistic economy.
Answer:
The countries are the USA, West Germany, Australia, and Japan.

Question 13.
What does socialism refer to?
Answer:
Socialism refers to a system of total planning, public ownership arid state control on economic activities.

Question 14.
Define socialism.
Answer:
Socialism is defined as a way of organizing a society in which major industries are owned and controlled by the government.

Question 15.
What does a socialist economy aim at?
Answer:
It aims at equality in the distribution of income and wealth and equal opportunity for all.

Question 17.
What do you mean by the mixed economy? (or) What is a mixed economy?
Answer:
In a mixed economy, both the private and public sectors co-exist and work together for economic development. It is a combination of capitalism and socialism.

Question 18.
What is a mixed economy? Give example or How does the mixed economy work?
Answer:
In Mixed Economy, resources are owned by Individuals and the Government. Eg: India, England, France, and Brazil.

Question 19.
How are variables classified in economics?
Answer:
Variables used in economic analysis are classified as stock and flow both may increase or decrease with time.

Question 20.
Write a note on stock and variable.
Answer:
Stock: It is a quantity of a commodity measured at a point in time.
Eg: Money supply, unemployment level, foreign exchange resources, and capital.
Flow Variable: They are measured over a period of time.
Eg: National income, exports, imports, consumption, production, investment, etc.

Question 21.
What is a model?
Answer:
A model is a simplified representation of a real situation. It is an explanation of the working of an economy.

Question 22.
How are models used in economics?
Answer:
In economics, models are used to describe economic activities, relationships, and behavior. They are built with graphs, equations, and maths.
Eg: Supply-demand models.

Question 23.
What does the circular flow of income indicate?
Answer:
It shows connections between different sectors of an economy.
Eg: The flow of income, goods, and services, is also a base of national accounts.

Question 24.
What do macro-economic studies about?
Answer:
It studies the behavior and performance of an economy as a whole.

Question 1.
Draw the flowchart of the functioning of an economy based on activities.
Answer: 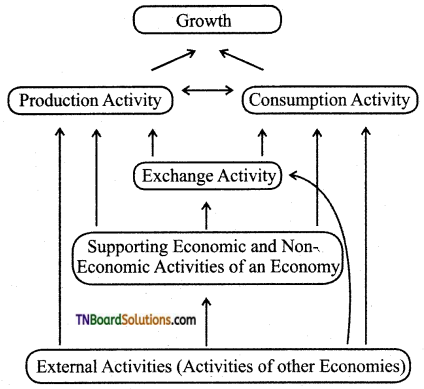 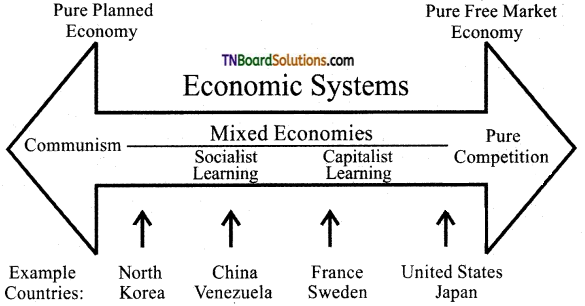 Question 4.
Draw the diagram of the circular flow of income in a three-sector economy.
Answer: 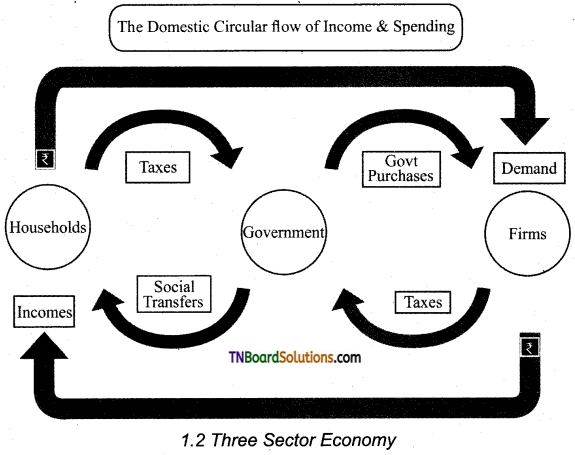 Question 5.
What are the limitations of macroeconomics?
Answer:

Question 1.
What are the features of a capitalist economy?
Answer:

Question 2.
What are the demerits of capitalism?
Answer:

Question 5.
Explain the merits of a mixed economy.
Answer:

Question 6.
Explain the demerits of a mixed economy.
Answer:

Question 7.
Explain three-sector economies with the diagram.
Answer:
In addition to households and firms, the inclusion of the government sector makes this model a three-sector model. The government levies taxes on households and firms, purchases goods and services from firms, and receive factors of production from the household sector. On the other hand, the government also makes social transfers such as pension, relief, subsidies to the households. Similarly, Government pays the firms for the purchases of goods and services. The Flow Chart illustrates the three-sector economy model: Under the three-sector model, national income(Y)isobtainedbyaddingConsumptionexpenditure(C), Investment expenditure (I), and Government expenditure (G).
[Refer diagram 1.2.]
Therefore:
Y = C + I + G 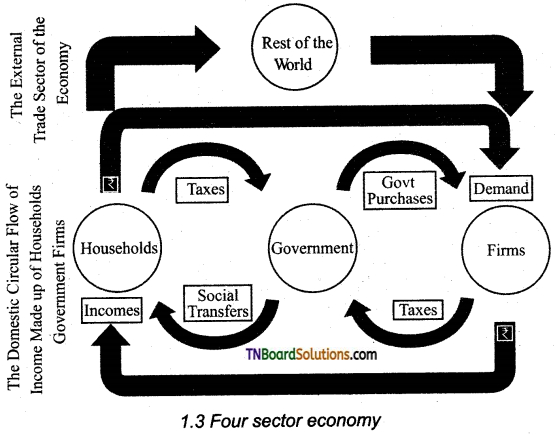 In a Four-sector economy, in addition to households, firms, and government, a fourth sector namely, the external sector is included. In real life, only a four-sector economy exists. This model is composed of four sectors namely,

The external sector comprises exports and imports. It is illustrated in the Flow Chart.
In a four-sector economy, expenditure for the entire economy includes domestic expenditure (C+I+G) and net exports (X- M). Therefore,
Y = C + I + G +(X – M).

6. Co-existence of capitalism and socialism is called as:
(a) Market Economy
(b) Mixedism
(c) Traditional Economy
(d) Village Economy
Answer:
(b) Mixedism

7. ……….. is the driving force behind ail Economic activities in a capitalistic economy.
(a) Market
(b) Price
(c) Demand
(d) profit
Answer:
(d) profit

11. Inequalities of income is increased in because of the concentration of wealth in few hands.
(a) Capitalism
(b) Socialism
(c) Mixedism
(d) Globalism
Answer:
(a) Capitalism

16. Society functions in a harmonious manner in Economy.
(a) Capitalist
(b) Socialist
(c) Mixedism
(d) Village
Answer:
(b) Socialist

17. ………… is a simplified representation of the real situation of the economy.
(a) Model
(b) Society
(c) National income
(d) Macroeconomics.
Answer:
(a) Model

20. In the production phase of the circular flow of income, the income are:
(a) created
(b) distributed
(c) spent
(d) accumulated
Answer:
(a) created

24. In national income accounting, reat is the payment for used of:
(a) parent
(b) trademark
(c) land
(d) godown
Answer:
(c) land