Students get through the TN Board 12th Chemistry Important Questions Chapter 10 Surface Chemistry which is useful for their exam preparation.

Question 3.
What are adsorbent and adsorbates? Give examples.
Answer:
Adsorbent is the material on which adsorption take place. Adsorbed substance is called adsorbate.
Examples for adsorbates: The gaseous molecules like He, Ne, O2, N2, SO2 and NH3 and solutions of NaCl or KCl.
Examples for adsorbents: Silica gel, metals like Ni, Cu, Pt, Ag and Pd and certain colloids.

Question 4.
What is an interface?
Answer:
The surface of separation of two phases where the concentration of adsorbed molecules is high is known as interface.

Question 6.
What do you understand by the term ‘sorption’?
Answer:
The term represents simultaneous adsorption and absorption.

Question 7.
What is the term used for sorption of gases on metal surfaces?
Answer:
Occlusion.

Question 8.
Give three examples for chemical adsorption or chemisorption.
Answer:

Question 11.
Why is adsorption exothermic?
Answer:
When adsorption occurs, entropy decreases, i.e., ΔS = negative. As ΔG = ΔH – TΔS, for a spontaneous process, AG must be negative. This can only be so, if ΔH is negative, i.e., the process is exothermic.

Question 12.
How do size of particles of adsorbent, pressure of gas and prevailing temperature influence the extent of adsorption of a gas on a solid?
Answer: 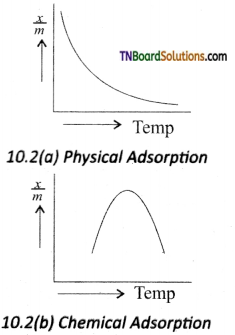 In physical adsorption, \(\frac{x}{m}\) decreases with increases in T, But in chemical adsorption, \(\frac{x}{m}\) increases with rise in temperature and then decreases. The increase illustrates the requirement of activation of the surface for adsorption is due to fact that the formation of activated complex requires certain energy.
The decrease at high temperature is due to desorption, as the kinetic energy of the adsorbate increases.

Question 14.
Derive Freundlich adsorption isotherm.
Answer:
A plot between the amount of adsorbate adsorbed and the pressure or concentration of adsorbate at constant temperature is called adsorption isotherms.
In order to explain these isotherms, various equations were suggested as follows: Freundlich adsorption isotherm.
According to Freundlinch,
\(\frac{x}{m}\) = Kp\(\frac{1}{n}\)
where V is the amount of adsorbate or adsorbed on ‘m’ gm of adsorbent at a pressure of p. K and n are constants.
Value n is always less than unity.
This equation is applicable for adsoiption of gases on solid surfaces. The same equation becomes \(\frac{x}{m}\) = Kc\(\frac{1}{n}\) when used for adsorption in solutions with c as concentration.
This equation quantitively predict the effect of pressure (or concentration) on the adsorption of gases (or adsorbates) at a constant temperature.
Taking log on both sides of the equation 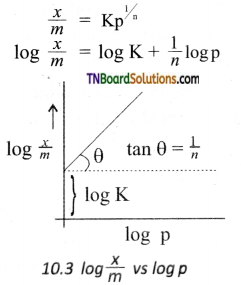 Hence the intercept represents the value of log K and the slope \(\frac{b}{q}\) gives \(\frac{1}{n}\).
This equation explains the increase of \(\frac{x}{m}\) with an increase in pressure. But experimental values show the deviation at low pressure.

Question 15.
Explain the application of adsorption (i) in the use of gas masks, (ii) in the use of softening hard water, (iii) in decolourisation of sugar.
Answer:
(i) Gas masks are devices containing suitable adsorbents so that poisonous gases present in the atmosphere are preferentially adsorbed and the air for breathing is purified.
Activated charcoal is one of the best adsorbents.
(ii) Permutit is employed for this process which adsorbs Ca2+ and Mg2+ ions in its surface, there is an ion exchange as shown below it occurs on the surface.

Exhausted permutit is regenerated by adding a solution of common salt.

(iii) Sugar prepared from molasses is decolourised to remove coloured impurities by adding animal charcoal which acts as decolourising material.

Question 16.
What are adsorption indicators?
Answer:
In the precipitation titrations, the endpoint is indicated by an external indicator that changes its colour after getting adsorbed on precipitate. It is used to indicate the endpoint of the titration. 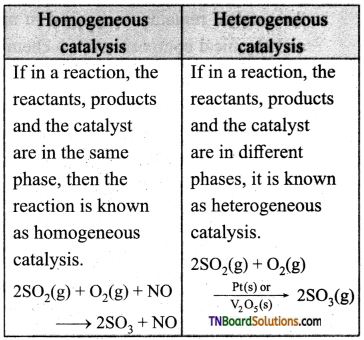 Question 18.
Name the catalysts used in the following:
(i) Haber’s process in the manufacture of ammonia.
(ii) Oxidation of ammonia.
(iii) Hydrogenation of alkenes.
(iv) Decomposition of H2O2.
(v) Formation of acetophenone from benzene and ethanoyl chloride. Also, give equations for the reactions.
Answer:
(i) The catalyst used is Iron,

(ii) The catalyst is platinum gauze.

(iv) The catalyst is platinum

Question 21.
Explain the action of anhydrous aluminium chloride in Friedel-Crafts reaction.
Answer:
The mechanism of Friedel crafts reaction is given below

The action of catalyst is explained as follows:

It is an intermediate.

Question 22.
Give the mechanism of the following reactions based on intermediate formation theory.
Answer:

Question 23.
Mention the limitations of the intermediate compound formation theory of catalysis.
Answer:

Question 24.
Explain the salient features of the adsorption theory of catalysis.
Answer:
According to this theory, the reactants are adsorbed on the catalyst surface to form an activated complex which subsequently decomposes and gives the product.
The various steps involved in a heterogeneous catalysed reaction are given as follows:

Question 26.
What is the role of a promoter in heterogeneous catalysis?
Answer:
A promoter increases the number of active centres on the surfaces.

Question 30.
Explain phase transfer catalysis with an example.
Answer:
Substitution of Cl– and CN– in the following reaction.

R-Cl = 1-chlorooctane
R-CN = 1-cyanooctane
By direct heating of two-phase mixture of organic 1 -chlorooctane with aqueous sodium cyanide for several days, 1-cyanooctane is not obtained. However, if a small amount of quaternary ammonium salt like tetraalkyl ammonium chloride is added, a rapid transition of 1 -cyanooctane occurs in about 100% yield after 1 or 2 hours. In this reaction, the tetraalkyl ammonium cation, which has hydrophobic and hydrophilic ends, transports CN from the aqueous phase to the organic phase using its hydrophilic end and facilitates the reaction with 1-chloroocatne as shown below:

So phase transfer catalyst speeds up the reaction by transporting one reactant from one phase to another.

Question 34.
Explain how colloidal particles of metals are prepared by electro dispersion method.
Answer:
An electrical arc is struck between electrodes dispersed in the water surrounded by ice. When a current of 1 amp /100V is passed an arc produced forms vapours of metal which immediately condense to form a colloidal solution. By this method colloidal solution of many metals like copper, silver, gold, platinum, etc. can be prepared Alkali hydroxide is added as a stabilising agent for the colloidal solution.

Question 37.
What is the principle involved in the purification of a colloidal solution by dialysis?
Answer:
The separation of crystalloids (electrolytes) from colloids is based upon the principle that particles of crystalloid pass through the animal membrane (bladder) or parchment paper, or cellophane sheet whereas those of colloid do not.

Question 39.
Explain the Tyndall effect.
Answer:
Colloids have optical properties. When a homogeneous solution is seen in the direction of light, it appears clear but it appears dark, in a perpendicular direction.
But when light passes through a colloidal solution, it is scattered in all directions. The colloidal particles absorb a portion of light and the remaining portion is scattered from the surface of the colloid. Hence the path of light is made clear. This phenomenon is known as the Tyndall effect.

Question 45.
Explain the term coagulation or flocculation.
Answer:
The conversion of a colloid to a precipitate is known as coagulation or precipitation. Coagulation results in the removal of charges on the colloid by any one of the following:

These methods help remove charges from the particles. Thus, the particles come closer, form an aggregate of particles and finally settles down as a precipitate due to gravity.

Question 48.
What happens when gelatin is mixed with gold sol?
Answer:
Gold sol is lyophobic. Gelatin forms lyophilic sol and acts as a protective colloid. On adding gelatin to gold sol, the latter becomes more stable.

Question 49.
A colloid is formed by adding FeCl3 in excess of hot water. What will happen if an excess ferric chloride is added to this colloid?
Answer:
On adding FeCl3 to water, a colloidal sol of hydrated ferric oxide is formed. This is a positively charged colloid as it adsorbs Fe+3 ions on its surface. On adding NaCl, Cl– ions bring about coagulation.

Question 50.
How does the boiling of a colloid, help the coagulation of a colloidal solution?
Answer:
Boiling vessels in increased collisions between the colloidal particles. The sol particles combine and settle down as a precipitate.

Question 52.
Define gold number. Mention its use.
Answer:
‘Gold number’ as a measure of protecting the power of a colloid. The gold number is defined as the number of milligrams of hydrophilic colloid that will just prevent the precipitation of 10ml of gold sol on the addition of 1ml of 10% NaCl solution. Smaller the gold number greater the protective power.

Question 55.
What is emulsification?
Answer:
The process of preparation of emulsion by the dispersal of one liquid in another liquid is called Emulsification.

Question 56.
What is an emulsifier or emulsification agent?
Answer:
It is a substance added to have a stable emulsion. The type of emulsion formed depends upon the nature of the emulsifying agent. For example, the presence of soluble soaps as an emulsifying agent favours the formation of oil in water type of emulsions, whereas insoluble soaps (containing non alkali metal atoms) favours the formation of water in oil emulsions.

Question 57.
Mention the properties of the emulsion.
Answer:

2. Which of the following statements is incorrect regarding physisorption?
(a) It occurs because of vander Waals forces.
(b) More easily liquefiable gases are adsorbed readily.
(c) Under high pressure, it results in multimolecular layer on the adsorbent surface.
(d) Enthalpy of adsorption in low and positive.
Answer:
(d)
Hint: Enthalpy of adsorption is always negative.

4. In physisorption, adsorbent does not show specificity for any particular gas because:
(a) involved van der Waals forces are universal
(b) gases involved behave like ideal gases
(c) enthalpy of adsorption is low
(d) it is a reversible gas
Answer:
(a)

5. Which of the following is an example of adsorption?
(a) water on silica gel
(b) water on calcium carbide
(c) hydrogen on finely divided nickel
(d) oxygen on the metal surface
Answer:
(c)

6. On the basis of data given below predict which of the following gases show least adsorption on a definite amount of charcoal

i.e., constant parallel to log C axis.
[Note: This is the equation for adsorption of solids in solution.]

Which of the following is the correct option?

11. Method by which lyophobic sol can be protected:
(a) addition of oppositely charged sol
(b) addition of an electrolyte
(c) addition of lyophilic sol
(d) by boiling
Answer:
(c)

14. A colloidal system having a solid substance as a dispersed phase and liquid as dispersion medium is classified as:
(a) solid sol
(b) gel
(c) emulsion
(d) sol
Answer:
(d)

Answer:
(d)
Hint:
As excess KI has been added, I– ions are adsorbed on AgI forming a fixed layer (giving negative charge). It then attracts the counter ion (K+) from the medium forming a second layer, (diffused layer). 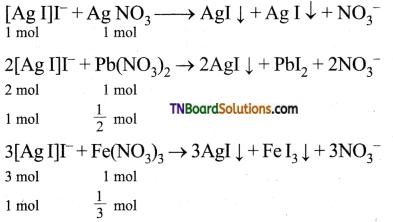 18. Gelatin is mostly used in making ice creams in order to:
(a) prevent the formation of colloidal sol.
(b) enrich fragrance.
(c) prevent crystallisation and stabilise the mix.
(d) modify the taste.
Answer:
(c)
Hint: Gelatin is a protective colloid. It stabilises the mix and prevents crystallisation.

19. Which of the following has a minimum gold number?
(a) Starch
(b) Sodium oleate
(c) Gum arabic
(d) Gelatin
Answer:
(d) 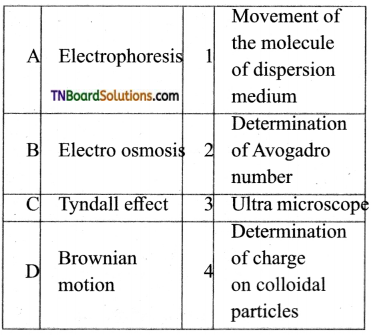 Which of the following is the correct option?