Students get through the TN Board 11th Commerce Important Questions Chapter 29 Elements of Contract which is useful for their exam preparation.

Question 2.
What is an Agreement?
Answer:
Every promise and set of promises forming consideration for each other is an agreement. In short, Agreement = Offer + Acceptance.

Question 5.
Explain the Bilateral contract.
Answer:
A contract in which both the parties commit to performing their respective promises is called a bilateral contract, eg: R offers to sell his fiat car to S for Rs. 10,00,000 on acceptance of R’s offer by S, there is a promise by R to Sell the car and there is a promise by S to purchase – the car, there are two promises.

Question 6.
Define Law.
Answer:
Law means a set of rules which governs our, behaviour and relating in a civilized society. So there is no need for Law in an uncivilized society. One to should know the law to which he is subjected because ignorance of the law is no excuse.

Question 1.
Define free consent.
Answer:
The consent of the parties must be free and genuine. Consent means agreeing upon the same thing in the same sense at the same time i.e. there should be consensus-ad-idem. Consent is said to be free when it is not caused by coercion, undue influence, fraud, misrepresentation or mistake.

Question 3.
What is the Indian Contract?
Answer:
The Indian Contract Act occupies the most important place in Commercial Law. Without Contract Act, it would have been difficult to carry on a trade or any other business activity. It is not only the business community that is concerned with the Contract Act, but it also influences the entire society. The main object of the contract action is to Assure that the rights and obligations which arise out of the contract are carried out and in case of failure to do so, the remedies are made available to the affected party.

Question 4.
Write a short note on the executory contract.
Answer:
A contract in which both the parties are yet to fulfil their obligations, it is said to be an executory contract, eg: A agrees to buy B’s cycle by promising to pay cash on 15th June. B agrees to deliver the cycle on 20th June.

Question 5.
Write a short note on a unilateral contract.
Answer:
A unilateral contract is a one-sided contract in which only one party has performed his promise or obligation, the other party has to perform his promise or obligation, eg: X promises to pay Y a sum of? 10,000 for the goods to be delivered by Y. X paid the money and Y is yet to deliver the goods.

Question 1.
What is the classification of the type of contracts?
Answer: 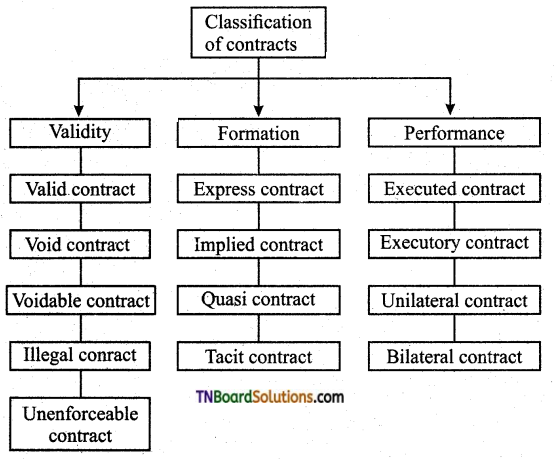 3. P owes Q Rs. 10,000/- for the last 10 years and the payment is time-barred. P signs a pro-note for it. Is it a valid contract? If yes, give a reason.
Answer:
No. It is not a valid contract. The promotion will be renewed every year.

1. After studying this chapter anyone can enter into a Valid Contract and can also identify the essentials present in the contract.
Answer:
When one person signifies to another his willingness to do or to abstain from doing anything with the accent of that other person.

2. After understanding this chapter entering into Offer and” giving Acceptance becomes easier.
Answer:
An agreement of purity social or domestic nature is not at all a contract. An invitation to dinner does not create any legal relationship and hence, is not a contract.
Offer = proposal
Acceptance = proposal is accepted.

5. After analysing this chapter an obligation imposed by law – Quasi Contracts are better understood and distinguished from other contracts.
Answer:
Quasi-contract is an obligation of one party to another imposed by law independent Of an agreement between the parties.
Illegal contract: It is a contract that is forbidden by law. All illegal agreement is void but all void agreements or contracts are not necessarily illegal.

1. The Indian Contract Act occupies the most important place in the ……….. law.
(a) commercial
(b) civil
(c) criminal
(d) labour
Answer:
(a) commercial