Students get through the TN Board 11th Commerce Important Questions Chapter 10 Reserve Bank of India which is useful for their exam preparation. 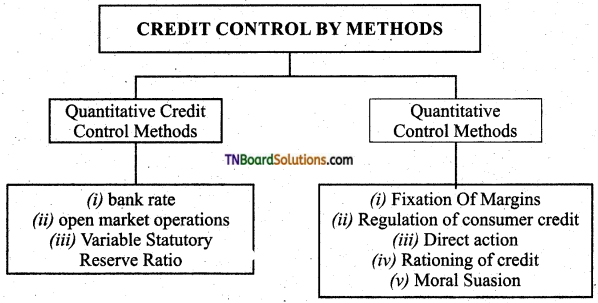 Question 2.
Who is the Banker to the Government?
Answer:
RBI acts as the banker and agent of the government. It gives the following services:

Question 3.
Who is called a Banker’s Bank?
Answer:
As per the Banking Regulation Act 1949, every bank has to keep, certain minimum cash balance with RBI. This is called as Cash Reserve Ratio. The scheduled banks can borrow money from the reserve bank of India on eligible securities and by rediscounting bills of exchange. Thus it acts as a banker’s bank.

Question 1.
What is the main objective of RBI?
Answer:

2. Mention the names of Central Banks in three other countries.
Answer:

5. Collection of photocopy of currencies and coins in India.
Answer: 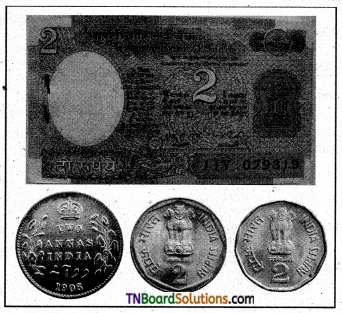 1. Take up a recent newspaper clipping about RBI such as the measures taken to reduce NPA. etc.
Answer:
Central banks are not known to be trigger happy. RBI is no exception. Indeed it has often been criticized for being much too cautious. Especially when it comes to loosening Capital A/c.

2. Arrange for a group discussion on customer grievances and the cases settled by Banking Ombudsman offices.
Answer:
The RBI today said it will bring about a customer grievances redressal mechanism for non-banking finance companies NBFCs by this month-end.

3. Visit the RBI website www.rbi.org.in to read and have a discussion on any annual report, etc.
Answer:
The asset quality of the banking sector continued to be a concern during 2016-2017. In the aftermath of the assets quality review (QAR) undertaken by the RBI.

5. Name the controlling authority to telecom services in India.
(a) TRAI
(b) SEBI
(c) RBI
(d) IRDA
Answer:
(a) TRAI

7. Banks are called as manufactures of:
(a) Money
(b) Loans
(c) Deposit
(d) Overdrafts
Answer:
(a) Money

9. A bank that occupies a central position in the monetary and banking system of the country and has a superior financial authority is:
(a) Central Bank
(b) Commercial Bank
(c) Exchange Bank
(d) Co-operative bank
Answer:
(a) Central Bank