Students get through the TN Board 11th Bio Zoology Important Questions Chapter 5 Digestion and Absorption which is useful for their exam preparation.

Question 1.
What are the steps involved in the digestive process?
Answer:
The process of digestion involves intake of the food (Ingestion), breakdown of the food into micromolecules (Digestion), absorption of these molecules into the bloodstream (Absorption), the absorbed substances becoming components of cells (Assimilation) and elimination of the undigested substances (Egestion). The digestive system includes the alimentary canal and associated digestive glands.

Question 3.
What is plaque? If it persists for a long time what will happen? What are the symptoms of it?
Answer:
Mineral salts like calcium and magnesium are deposited on the teeth and form a hard layer of ‘tartar’ or calculus called plaque. If the plaque formed on teeth is not removed regularly, it would spread down the tooth into the narrow gap between the gums and enamel and causes inflammation, called gingivitis, which leads to redness and bleeding of the gums and to bad smell.

Question 4.
What is the position of the tongue inside the mouth?
Answer:
The tongue is a freely movable muscular organ attached at the posterior end by the frenulum to the floor of the buccal cavity and is free in the front. It acts as a universal toothbrush and helps in intake.

Question 6.
What is GERD?
Answer:
If the cardiac sphincter does not contract properly during the churning action of the stomach the gastric juice with acid may flow back into the oesophagus and cause heart bum, resulting in GERD (Gastro Oesophagus Reflex Disorder).

Question 8.
How the structure of the small intestine is helping the process of absorption of food after the digestion of food?
Answer:
The ileal mucosa of the small intestine has numerous vascular projections called villi which are involved in the process of absorption and the cells lining the villi produce numerous microscopic projections called microvilli giving a brush border appearance that increases the surface area enormously.

Question 11.
Write about the brief account on salivary and gastric glands of the digestive system.
Answer:
The stomach wall has gastric glands that secrete gastric juice and the intestinal mucosa secretes intestinal juice.
Salivary glands: There are three pairs of salivary glands in the mouth. They are the largest parotids gland in the cheeks, the sub-maxillary/ sub-mandibular in the lower jaw and the sublingual beneath the tongue. These glands have ducts such as Stenson’s duct, Wharton’s duct and Bartholin’s duct or duct of Rivinis respectively. The salivary juice secreted by the salivary glands reaches the mouth through these ducts. The daily secretion of saliva from salivary glands ranges from 1000 to 1500 ml.
Gastric glands: The wall of the stomach is lined by gastric glands. Chief cells or peptic cells or zymogen cells in the gastric glands secrete gastric enzymes and Goblet cells secrete mucus. The Parietal or oxyntic cells secrete HCl and an intrinsic factor responsible for the absorption of Vitamin B12 called Castle’s intrinsic factor.

Question 12.
Describe the structure of the liver, which is considered the largest gland in our body with a neat sketch.
Answer:
Liver: The liver, the largest gland in our body is situated in the upper right side of the abdominal cavity, just below the diaphragm. The liver consists of two major left and right lobes; and two minor lobes. These lobes are connected with the diaphragm. Each lobe has many hepatic lobules (functional unit of the liver) and is covered by a thin connective tissue sheath called the Glisson’s capsule. Liver cells (hepatic cells) secrete bile which is stored and concentrated in a thin muscular sac called the gall bladder. The duct of the gall bladder (cystic duct) along with the hepatic duct from the liver forms the common bile duct. The bile duct passes downwards and joins with the main pancreatic duct to form a common duct called the hepato-pancreatic duct. The opening of the hepato-pancreatic duct into the duodenum is guarded by a sphincter called the power of regeneration and liver cells are replaced by new ones every 3-4 weeks. 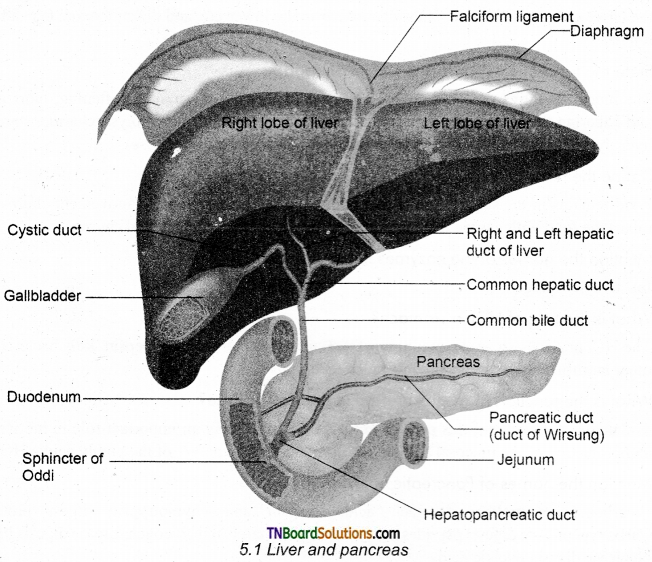 Question 13.
Apart from bile secretion, what are the other functions carried out by liver?
Answer:

Question 14.
What is the dual role performed by the Pancreas?
Answer:
The second-largest gland in the digestive system is the Pancreas, which is a yellow7 coloured, compound elongated organ consisting of exocrine and endocrine cells. It is situated between the limbs of the ‘U’ shaped duodenum. The exocrine portion secretes pancreatic juice containing enzymes such as pancreatic amylase, trypsin and pancreatic lipase and the endocrine part called Islets of Langerhans secretes hormones such as insulin and glucagon. The pancreatic duct directly opens into the duodenum.

Question 15.
Define the term digestion.
Answer:
The process of digestion converts solid food into absorbable and assimilable forms. This is accomplished by mechanical and chemical processes.

Question 16.
Name the types of Salivary glands.
Answer:
There are three pairs of salivary glands in the mouth. They are the largest parotids gland in the cheeks, the sub-maxillary/sub-mandibular in the lower jaw and the sublingual beneath the tongue.

Question 17.
State the functions of Salivary amylase on food.
Answer:
The mucus in saliva prepares the food for swallowing by moistening, softening, lubricating and adhering the masticated food into a bolus. About 30 per cent of polysaccharide, starch is hydrolyzed by the salivary amylase enzyme into disaccharides (maltose).

Question 18.
Define the term ‘Chyme’.
Answer:
Food remains in the stomach for 4 to 5 hours, the rhythmic peristaltic movement chums and mixes the food with gastric juice and make it into a creamy liquid called chyme.

Question 19.
Mention the names of the enzymes in the stomach.
Answer:
Inactive pepsinogen, Rennin

Question 20.
What is the role of HCl in the stomach?
Answer:
The HCl provides an acidic medium (pH 1.8) which is optimum for pepsin, kills bacteria and other harmful organisms and avoids putrefaction.

Question 21.
What is the function of mucus present in gastric juice?
Answer:
The mucus and bicarbonates present in the gastric juice play an important role in lubrication and protection of the mucosal epithelium from the eroding nature of the highly acidic HCl.

Question 23.
Describe the role of intestinal juice in the digestive process.
Answer:
The enzymes in the intestinal juice such as maltase, lactase, sucrase (invertase), dipeptidases, lipases, nucleosidases act on the breakdown products of bile and pancreatic digestion.

Question 24.
Write a short note on Absorption and Assimilation.
Answer:
Absorption is a process by which the end product of digestion passes through the intestinal mucosa into the blood and lymph. The villi in the lumen of the ileum are the absorbing units, consisting of a lacteal duct in the middle surrounded by fine network of blood capillaries. The process of absorption involves active, passive and facilitated transport. Small amounts of glucose, amino acids and electrolytes like chloride ions are generally absorbed by simple diffusion. The passage of these substances into the blood depends upon concentration gradients. However, some of the substances like fructose are absorbed with the help of the carrier ions like Na+. This mechanism is called facilitated transport.
Nutrients like amino acids, glucose and electrolytes like Na+ are absorbed into the blood against the concentration gradient by active transport. The insoluble substances like fatty acids, glycerol and fat-soluble vitamins are first incorporated into small, spherical water soluble droplets called micelles and are absorbed into the intestinal mucosa where they are re-synthesized into protein-coated fat globules called chylomicrons which are then transported into the lacteals within the intestinal villi and eventually empty into the lymphatic duct. The lymphatic ducts ultimately release the absorbed substances into the bloodstream. While the fatty acids are absorbed by the lymph duct, other materials are absorbed either actively or passively by the capillaries of the villi. Water-soluble vitamins are absorbed by simple diffusion or active transport. The transport of water depends upon the osmotic gradient.

Question 25.
Write a note on Egestion.
Answer:
The digestive waste and unabsorbed substances in the ileum enter into the large intestine and it mostly contains a fibre called roughage. The roughage is utilized by symbiotic bacteria in the large intestine for the production of substances like vitamin K and other metabolites. All these substances are absorbed in the colon along with water. The waste is then solidified into faecal matter in the rectum. The faecal matter initiates a neural reflex causing an urge or desire for its removal. The egestion of faeces through the anal opening is called defaecation. It is a voluntary process and is carried out by a peristaltic movement.

Question 28.
Write a short note on the following:

Question 29.
What is diarrhoea? Why diarrhoea is caused? What are its symptoms? How it can be treated.
Answer:
Diarrhoea is the most common gastrointestinal disorder worldwide. It is sometimes caused by bacteria or viral infections through food or water. When the colon is infected, the lining of the intestine is damaged by the pathogens, thereby the colon is unable to absorb fluid. The abnormal frequency of bowel movement and increased liquidity of the faecal discharge is known as diarrhoea. Unless the condition is treated, dehydration can occur. Treatment is known as oral hydration therapy. This involves drinking plenty of fluids – sipping small amounts of water at a time to rehydrate the body.

Question 30.
What is called Obesity? How can it be assessed?
Answer:
Obesity is caused due to the storage of excess body fat in adipose tissue. It may induce hypertension, atherosclerotic heart disease and diabetes. Obesity may be genetic or due to excess intake of food, endocrine and metabolic disorders.

3. A cartilaginous flap that prevents the entry of food in to the glottis is called:
(a) Buccal cavity
(b) Gullet
(c) Epiglottis
(d) Calculus
Answer:
(b) Gullet

8. Masticated food particles passed into pharynx and then into the oesophagus by the process called:
(a) deglutition
(b) dentition
(c) mastication
(d) putrifaction
Answer:
(a) deglutition