Students get through the TN Board 11th Bio Botany Important Questions Chapter 5 Taxonomy and Systematic Botany which is useful for their exam preparation.

Question 1.
Define taxonomy.
Answer:
Davis and Heywood (1963) defined taxonomy as “the science dealing with the study of classification including the bases, principles, rules, and procedures”.

Question 2.
Describe a genus with an example.
Answer:
Genus consists of multiple species which have similar characters but differ from toe species of another genus, eg. Helimthmt Tridax.

Question 6.
What is holotype nomenclature?
Answer:
A specimen or illustration originally cited by the author in the protologue. It is a definitive reference source for identity. Citation of holotype and submission of it is one of the criteria for valid publication of a botanical name.

Question 9.
Define Chemotaxonomy.
Answer:
Chemotaxonomy is the scientific approach to the classification of plants on the basis of their biochemical constituents.

Question 10.
What are the aims, of chemotaxonomy?
Answer:

Question 11.
Define Serotaxonomy.
Answer:
The classification of very similar plants by means of differences in the proteins they contain, to solve taxonomic problems is called serotaxonomy.

Question 12.
What is meant by DNA barcodes?
Answer:
The genetic sequence used to identify a plant is known as “DNA tags” or “DNA barcodes”.

Question 13.
What do you know about cladistics?
Answer:
The method of classifying organisms into monophyletic group of a common ancestor based on shared apomorphic characters is called cladistics (from Greek, klados- branch).

Question 16.
Mention any two medicinal plants with their useful parts of the plant.
Answer:

Question 18.
List any two economic uses of plants under the family Liliaceae.
Answer: 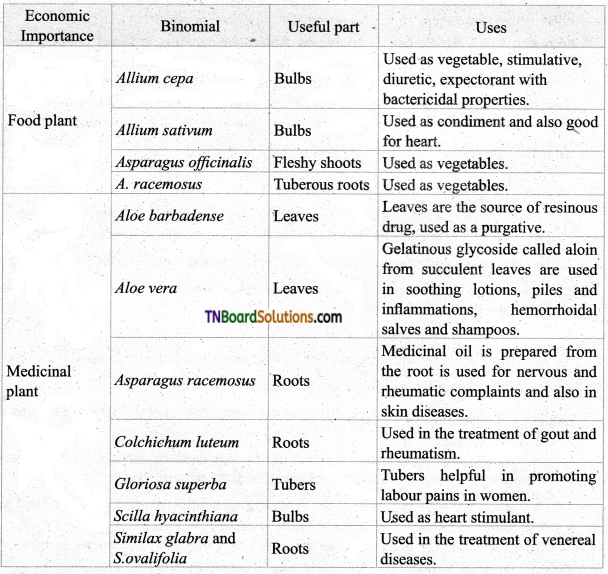 Question 1.
Explain the differences between taxonomy and systematics.
Answer:

Question 2.
What is Botanical nomenclature? Explain the international code of botanical nomenclature.
Answer:
Assigning a name for a plant is known as Nomenclature. This is based on the rules and recommendations of the International Code of Botanical Nomenclature. ICB deals with the names of existing (living)and extinct (fossil) organisms. The elementary rule of the naming of the plant was first proposed by Linnaeus in 1737and 1751 in his Philosophia Botanica. In 1813 a detailed set of rules regarding plant nomenclature was given by A.P. de Candolle in his famous ‘ work “Theorie elementaire de la botanique”. Then the present ICBN was evolved by following the same rules of Linnaeus, A.P. de Candolle, and his son Alphonse de Candolle.

Question 4.
List out the uses of the herbarium.
Answer:

Question 5.
Explain Bentham and the hooker system of Glassification.
Answer:

Question 6.
What do you know about karyotaxonomy?
Answer:

Question 7.
What is RFLP? Explain briefly.
Answer:
RFLPs are a molecular method of genetic analysis that allows the identification of taxa based on unique patterns of restriction sites in specific regions of DNA. It refers to differences between taxa in restriction sites and therefore the lengths of fragments of DNA following cleavage with restriction enzymes.

Question 8.
What is the significance of molecular taxonomy?
Answer:

Question 10.
Write down the floral formula of the following plants.
Answer:

Question 1.
What is the concept of Species? Explain briefly the various concepts.
Answer:
Species are the fundamental unit of taxonomic classification. The Greek philosopher Plato proposed the concept of “eidos” or species and believed that all objects are shadows of the “eidos”. According to Stebbins (1977) species is the basic unit of the evolutionary process. A species is a group of individual organisms which have the following characters.

Question 2.
Describe the method of preparation of herbarium specimen.
Answer:

Question 3.
Explain the basis of molecular taxonomy with its uses.
Answer:

(a) Monophyletic group: Taxa comprising all the descendants of a common ancestor. 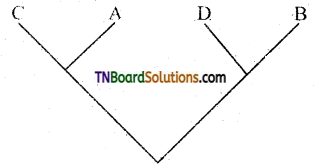 (b) Paraphyietic group: Taxon that includes an ancestor but not all of the descendants of that ancestor.

Question 5.
Explain the general characters of the family Solanaceae.
Answer:

Question 6.
Give the floral characters of Pisum sativum.
Answer: 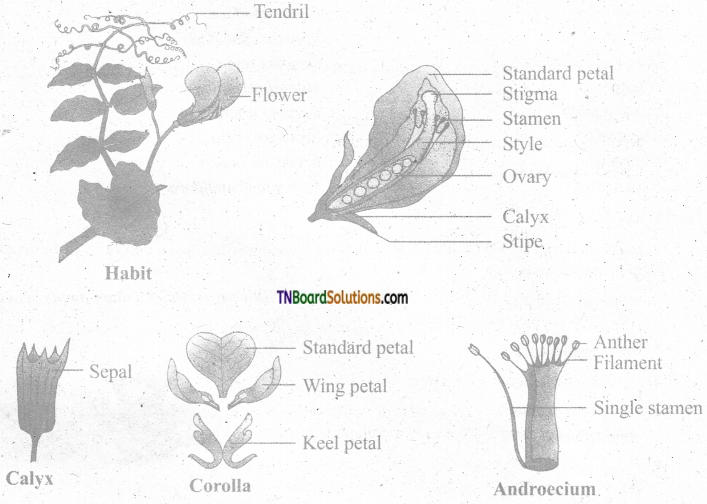 Write common names and scientific names of 10 different plants around your home.
Answer:

Can you identify this?

(a) Name the family.
Answer:
Asparagales

2. The lowest of classification is:
(a) Genus
(b) Kingdom
(c) species
(d) Family
Answer:
(c) species

4. The first botanical garden was established by Theophrastus at:
(a) London
(b) Sydney
(c) Athens
(d) Singapore
Answer:
(c) Athens

12. Genetic sequence used to identify a plant is known as:
(a) DNA tags
(b) Polymorphic DNA
(c) Fragment of DNA
(d) Genome
Answer:
(a) DNA tags

26. Polyadelphous condition is found in:
(a) Leguninaceae
(b) rutaceae
(c) compositae
(d) Liliaceae
Answer:
(b) rutaceae

27. Indefinite stamens are characteristic of the family:
(a) malvaceae
(b) graniceae
(c) labiatac
(d) cruciferae
Answer:
(a) malvaceae