Students get through the TN Board 11th Bio Botany Important Questions Chapter 15 Plant Growth and Development which is useful for their exam preparation.

Question 1.
Give the definition for Growth.
Answer:
Growth is defined as an irreversible permanent increase in size, shape, number, volume, and dry weight. 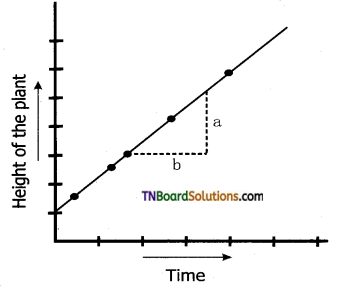 Question 7.
What is Re-differentiation?
Answer:
Differentiated cells, after multiplication again lose the ability to divide and mature to perform specific functions. This is called redifferentiation.

Question 10.
Define the term Bioassay.
Answer:
Bioassay means-testing of substances for their activity in causing a growth response in a living plant or its part.

Question 13.
Mention the precursors of (a) Auxin, (b) Gibberellin, (c) Cytokinin and (d) Abscisic acid.
Answer:

Question 17.
Which plants are affected by Bakanae’s disease? Name the causative organism.
Answer:
Bakanae’s disease affects the rice plants. It is caused by a fungus called Gibberella fujikuroi.

Question 18.
Biennials usually flower at the second year of growth. Is it possible to make them flower in the first year itself? How?
Answer:
Many biennials usually flower during the second year of their growth. For flowering to take place, these plants should be exposed to the cold season. Such plants could be made to flower without exposure to the cold season in the first year itself when they are treated with gibberellins. 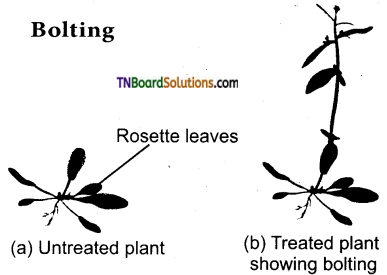 Question 19.
Where cytokinin is synthesized in plants?
Answer:
Cytokinin is formed in root apex, shoot apex, buds, and young fruits.

Question 20.
Give an account on neem Coty Ledon assay.
Answer:
Bioassay (Neem Cotyledon Assay): Neem cotyledons are measured and placed in cytokinin solution as well as in ordinary water. Enlargement of cotyledons is an indication of cytokinin activity.

Question 22.
Write a note on Bioassay of Ethylene.
Answer:
Ethylene can be measured by gas chromatography. This technique helps in the detection of the exact amount of ethylene from different plant tissues like lemon and orange.

Question 25.
Define photoperiodism. Name the person who coined this term.
Answer:
The physiological change on flowering due to relative length of light and darkness (photoperiod) is called Photoperiodism. The term photoperiodism was coined by Gamer and Allard.

Question 26.
Define the term photo neutrals.
Answer:
There are a number of plants that can flower in all possible photoperiods. They are also called photo neutrals or indeterminate plants. Example: Potato, Rhododendron, Tomato, and Cotton.

Question 28.
Vernalisation – Define.
Answer:
Many species of biennials and perennials are induced to flower by low-temperature exposure ‘ (0°C to 5°C). This process is called Vernalization.

Question 29.
How vernalisation is carried out?
Answer:
The seeds are first soaked in water and allowed to germinate at 10°C to 12°C. Then seeds are transferred to low temperature (3°C to 5°C) from few days to 30 days. Germinated seeds after this treatment are allowed to dry and then sown. The plants will show quick flowering when compared to untreated control plants.

Question 31.
What are photoelastic seeds?
Answer:
There are many seeds that respond to light for germination and these seeds said to be photoelastic.

Question 33.
Senescence-Define.
Answer:
Old age is called senescence in plants. Senescence refers to all collective, progressive and deteriorative processes which ultimately lead to complete loss of organization and function.

Question 34.
What field do phytogerontology deal with?
Answer:
The branch of botany that deals with aging, abscission, and senescence is called Phytogerontology.

Question 37.
Expand PCD and define it.
Answer:
Death of the plant or its parts consequent to senescence is called Programmed Cell Death (PCD).

Question 1.
Draw a graph of the sigmoid curve.
Answer: 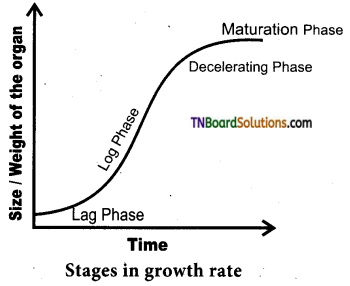 Question 2.
Correlate the terms light & etiolation in the plant.
Answer:
Light has its own contribution to the growth of the plant. Light is important for growth and photosynthesis. Light stimulates healthy growth. The absence of light may lead to yellowish in color. This is called etiolation.

Question 8.
How auxin is useful in tissue culture technique?
Answer:
Auxin is responsible for the initiation and promotion of cell division in the cambium, which is responsible for secondary growth and tumor. This property of induction of cell division has been exploited for tissue culture techniques and for the formation of callus.

Question 9.
Mention the role of ethylene in the agriculture field.
Answer:

Question 11.
How ABA involves stomatal closure.
Answer:
ABA helps in reducing the transpiration rate by closing stomata. It inhibits K+ uptake by guard cells and promotes the leakage of malic acid. It results in the closure of stomata.

Question 14.
Discuss seed viability.
Answer:
Viability: Usually seeds remain viable or living only for a particular period. Viability of seeds ranges from a few days (Example: Oxalis) to more than a hundred years. Maximum viability (1000 years) has been recorded in lotus seeds. Seeds germinate only within the period of viability.

Question 17.
Mention the role of hormones in Abscission.
Answer:
All naturally occurring hormones influence the process of abscission. Auxins and cytokinins retard abscission, while abscisic acid (ABA) and ethylene induce it.

Question 18.
Why Abscission has to take place?
Answer:
Significance of abscission

Question 3.
Give a detailed account of the geometric growth rate.
Answer:
This growth occurs in many higher plants and plant organs and is measured in size or weight. In-plant growth, geometric cell division results if all cells of an organism or tissue are active mitotically. Example: Round three in the given figure 15.5, produces 8 cells as 23 5 8 and after round 20 there are 220 5 1,048,576 cells. The large, plant, or animal parts are produced this way. In fact, it is common in animals but rare in plants except when they are young and small. 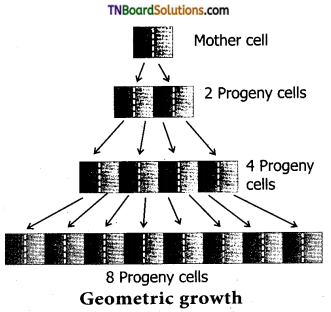 An exponential growth curve can be expressed as,
W1 = W0ert
W1 = Final size (weight, height and number)
W0 = Initial size at the beginning of the period
r = Growth rate
t = Time of growth
e = Base of the natural logarithms
Here r is the relative growth rate and also a measure of the ability of the plant to produce new plant material, referred to as efficiency index. Hence, the final size of W1 depends on the initial size W0.

Question 6.
Mention the role of Auxin in Agri-field.
Answer:

Question 7.
Mention the role of Gibberellin in agriculture.
Answer:

Question 9.
List out the physiological effects of Abscisic acid.
Answer:

Question 10.
Classify and explain the plants based on photoperiodism.
Answer:

Question 11.
Describe the concept of Phytochrome.
Answer:
Phytochrome is a bluish biliprotein pigment responsible for the perception of light in a photo physiological process. Butler et al, (1959) named this pigment and it exists in two interconvertible forms: (i) red light-absorbing pigment which is designated as Pr and (ii) far-red light-absorbing pigment which is designated as Pfr. The Pr form absorbs red light in 660 nm and changes to Pfr. The Pfr form absorbs far-red light in 730 nm and changes to Pr. The P form is biologically inactive and it is stable whereas Pfr form is biologically active and it is very unstable. In short-day plants, Pr promotes flowering and Pfr inhibits the flowering whereas in long-day plants flowering is promoted by Pfr and inhibited by Pr form. Pfr is always associated with a hydrophobic area of membrane systems while Pr is found in the diffused state in the cytoplasm. The interconversion of the two forms of phytochrome is mainly involved in flower induction and also additionally plays a role in seed germination and changes in membrane conformation.

Question 13.
Discuss the external factors that affect seed germination.
Answer:
External Factors:
a. Water: It activates the enzymes which digest the complex reserve foods of the seed. If the water content of the seed goes below a critical level, seeds fail to germinate.
b. Temperature: Seeds fails to germinate at very low and high temperature. The optimum temperature is 25°C to 35°C for most tropic species.
c. Oxygen: It is necessary for germination. Since aerobic respiration is a physiological requirement for germination most will germinate well in air containing 20% oxygen.
d. Light: There are many seeds that respond to light for germination and these seeds said to be photoelastic.
e. Soil Conditions: Germination of seed in its natural habit is influenced by soil conditions such as holding capacity, mineral composition, and aeration of the soil.

Question 15.
Give a detailed account of different types of senescence.
Answer:

Question 17.
What are the physiological changes occurring in plants during Abscission?
Answer:
Morphological and Anatomical changes during abscission:
Leaf abscission takes place at the base of the petiole which is marked internally by a distinct zone of few layers of thin-walled cells arranged transversely. This zone is called the abscission zone or abscission layer. An abscission layer is greenish-grey in color and is formed by rows of cells of 2 to 15 cells thick. The cells of the abscission layer separate due to the dissolution of the middle lamella and primary wall of cells by the activity of enzymes pectinase and cellulase resulting in the loosening of cells. Tyloses are also formed blocking the conducting vessels. Degrading of chlorophyll occurs leading to the change in the color of leaves, leaf detachment from the plant, and leaf fall. After abscission, the outer layer of cells becomes suberized by the development of periderm.

Question 2.
In the figure of the sigmoid and curve given below, label the segments A, B, and C. 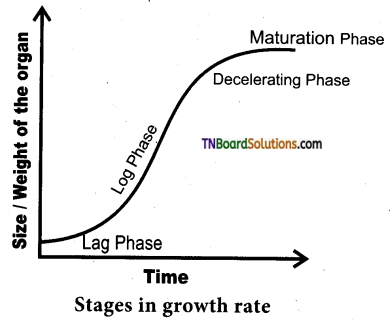 Question 4.
The physiological effects of ethylene are both positive and negative. Comment.
Answer:

Question 5.
Light plays an important role in the life of all organisms. Name any two physiological processes in plants that are affected by light.
Answer:
In plants, light plays a vital role in photosynthesis and growth.

9. Identify the wrong statement regarding the physiological effects of Auxin.
(i) Auxin prevents abscission
(ii) Auxin inhibits respiration
(iii) Auxin promotes cell elongation
(iv) Auxin breaks seed dormancy
(a) (i) only
(b) (ii) only
(c) (iii) only
(d) (i), (ii) and (iv)
Ans.
(b) (ii) only

16. Which of the following does not act as a precursor of ethylene?
(a) Fumaric acid
(b) Malic acid
(c) Linolenic acid
(d) Methionine
Ans.
(b) Malic acid

26. Shaking the seeds vigorously to remove the plug in the microphyle is the method of …………..
(a) Stratification
(b) Impaction
(c) Scarification
(d) Emaciation
Ans.
(b) Impaction