Question 19.
Give any one definition of power factor.
Answer:
The power factor is defined as the ratio of true power to the apparent power of an a.c. circuit.
It is equal to the cosine of the phase angle between current and voltage in the a.c. circuit. 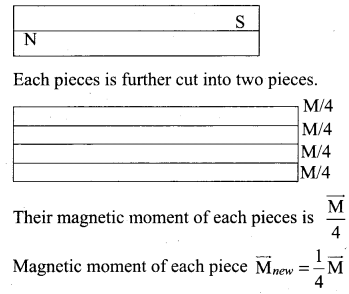 Question 29.
Writedown the integral form of modified Ampere’s circuital law.
Answer:
This law relates the magnetic field around any closed path to the conduction current and displacement current through that path.

Question 33.
What is the difference between Nano materials and Bulk materials?
Answer: 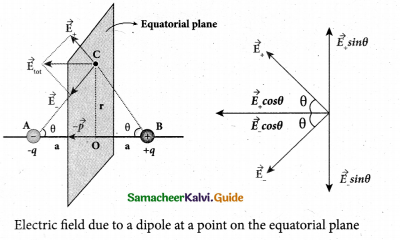 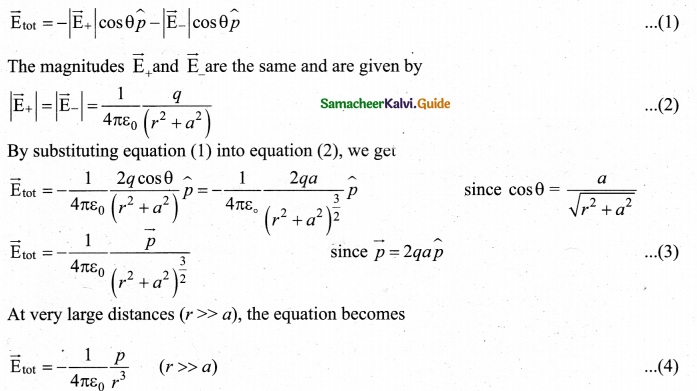 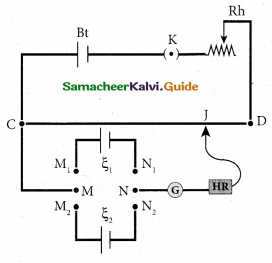 The DPDT switch is pressed towards M1, N1 so that cell ξ1, is included in the secondary circuit and the balancing length l1, is found by adjusting the jockey for zero deflection. Then the second cells ξ2, is included in the circuit and the balancing length l2, is determined. Let r be the resistance per unit length of the potentiometer wire and I be the current flowing through the wire.
we have
ξ1 = Irl1 ……………….. (1)
ξ2 = Irl2 ……………….. (2)
By dividing equation (1) by (2)
\(\frac{\xi_{1}}{\xi_{2}}=\frac{l_{1}}{l_{2}}\)
By including a rheostat (Rh) in the primary circuit, the experiment can be repeated several times by changing the current flowing through it.

Question 35.
(a) Discuss the working of cyclotron in detail.
Answer:
Cyclotron : Cyclotron is a device used accelerate the charged particles to gain large kinetic energy. It is also called as high energy accelerator. It was invented by Lawrence and Livingston in 1934. 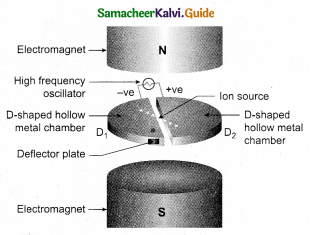 Principle : When a charged particle moves normal to the magnetic field, it experiences magnetic Lorentz force.

Working: Let us assume that the ion ejected from source S is positively charged. As soon as ion is ejected, it is accelerated towards a Dee (say, Dee – 1) which has negative potential at that time. Since the magnetic field is normal to the plane of the Dees, the ion undergoes circular path. After one semi-circular path in Dee-1, the ion reaches the gap between Dees. At this time, the polarities of the Dees are reversed so that the ion is now accelerated towards Dee-2 with a greater velocity. For this circular motion, the centripetal force of the charged particle q is provided by Lorentz force.

(b) Give the uses of Foucault current.
Answer:
Though the production of eddy current is undesirable in some cases, it is useful in some other cases. A few of them are

(1) Induction stove : Induction stove is used to cook the food quickly and safely with less energy consumption. Below the cooking zone, there is a tightly wound coil of insulated wire. The cooking pan made of suitable material, is placed over the cooking zone. When the stove is switched on, an alternating current flowing in the coil produces high frequency alternating magnetic field which induces very strong eddy currents in the cooking pan. The eddy currents in the pan produce so much of heat due to Joule heating which is used to cook the food.

In some cases, the circular disc, connected to the wheel of the train through a common shaft, is made to rotate in between the poles of an electromagnet. When there is a relative motion between the disc and the magnet, eddy currents are induced in the disc which stop the train. This is Eddy current circular brake.

(3) Eddy current testing : It is one of the simple non-destructive testing methods to find defects like surface cracks and air bubbles present in a specimen. A coil of insulated wire is given an alternating electric current so that it produces an alternating magnetic field. When this coil is brought near the test surface, eddy current is induced in the test surface. The presence of defects causes the change in phase and amplitude of the eddy current that can be detected by some other means. In this way, the defects present in the specimen are identified.

(4) Electro magnetic damping : The armature of the galvanometer coil is wound on a soft iron cylinder. Once the armature is deflected, the relative motion between the soft iron cylinder and the radial magnetic field induces eddy current in the cylinder. The damping force due to the flow of eddy current brings the armature to rest immediately and then galvanometer shows a steady deflection. This is called electromagnetic damping.

(b) Explain the Young’s double slit experimental setup and obtain the equation for path difference.
Answer:
Experimental setup
Wavefronts from S1 and S2 spread out and overlapping takes place to the right side of double slit. When a screen is placed at a distance of about 1 meter from the slits, alternate bright and dark fringes which are equally spaced appear on the screen. These are called interference fringes or bands. 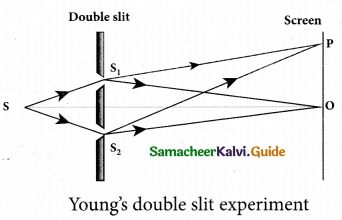 The fringes disappear and there is uniform illumination on the screen when one of the slits is covered. This shows clearly that the bands are due to interference. 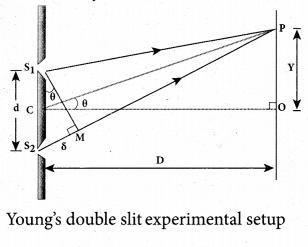 Question  37.
(a) Give the construction and working of photo emissive cell.
Answer:
Photo emissive cell:
Its working depends on the electron emission from a metal cathode due to irradiation of light or other radiations.

Question 37.
(b) Explain the J.J. Thomson experiment to determine the specific charge of electron.
Answer:
In 1887, J. J. Thomson made remarkable improvement in the scope of study of gases in discharge tubes. In the presence of electric and magnetic fields, the cathode rays are deflected. By the variation of electric and magnetic fields, mass normalized charge or the specific charge (charge per unit mass) of the cathode rays is measured. 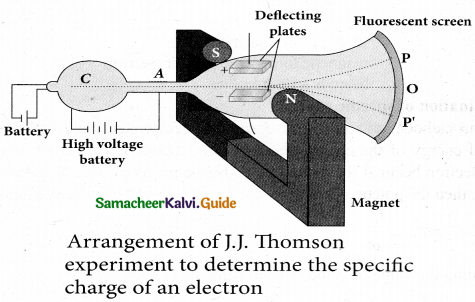 A highly evacuated discharge tube is used and cathode rays (electron beam) produced at cathode are attracted towards anode disc A. Anode disc is made with pin hole in order to allow only a narrow beam of cathode rays. These cathode rays are now allowed to pass through the parallel metal plates, maintained at high voltage. Further, this gas discharge tube is kept in between pole pieces of magnet such that both electric and magnetic fields are perpendicular to each other. When the cathode rays strike the screen, they produce scintillation and hence bright spot is observed. This is achieved by coating the screen with zinc sulphide. 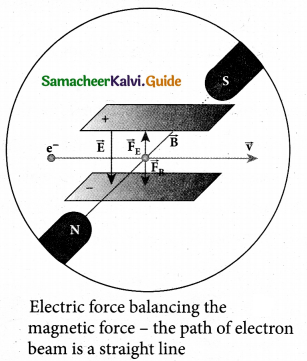 (iii) Deflection of charge only due to uniform electric field
When the magnetic field is turned off, the deflection is only due to electric field. The
deflection in vertical direction is due to the electric force.
Fe = eE ………………….. (3)
Let m be the mass of the electron and by applying Newton’s second law of motion,
acceleration of the electron is
\(a_{e}=\frac{1}{m} \mathrm{F}_{e}\) ………………… (4)
Substituting equation (4) in equation (3),
\(a_{e}=\frac{1}{m} e E=\frac{e}{m} E\)
Let y be the deviation produced from original position on the screen. Let the initial upward velocity of cathode ray be μ = 0 before entering the parallel electric plates. Let l be the time taken by the cathode rays to travel in electric field. Let l be the length of one of the plates, then the time taken is
\(t=\frac{l}{v}\) …………(5) 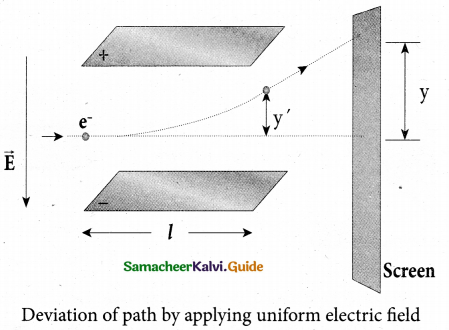 Therefore, the deflection y on the screen is
y α y’ ⇒ y = Cy’
where C is proportionality constant which depends on the geometry of the discharge tube and substituting y’ value in equation (6), we get 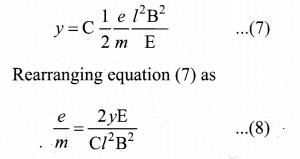 Substituting the values on RHS, the value of specific charge is calculated as
e/m = 1.7 x 1011Ckg-1

Question 38.
(a) What is an LED? Give the principle of operation with a diagram.
Answer:
Light Emitting Diode (LED): LED is a p-n junction diode which emits visible or invisible light when it is forward biased. Since, electrical energy is converted into light energy, this process is also called electroluminescence. The cross-sectional view of a commercial LED is shown in figure (b). It consists of a p-layer, n-layer and a substrate. A transparent window is used to allow light to travel in the desired direction. An external resistance in series with the biasing source is required to limit the forward current through the LED. In addition, it has two leads; anode and cathode.

When the p-n junction is forward biased, the conduction band electrons on n-side and valence band holes on p-side diffuse across the junction. When they cross the junction, they become excess minority carriers (electrons in p-side and holes in n-side). These excess minority carriers recombine with oppositely charged majority carriers in the respective regions, i.e. the. electrons in the conduction band recombine with holes in the valence band as shown in the figure (c). During recombination process, energy is released in the form of light (radiative) or heat (non-radiative). For radiative recombination, a photon of energy hv is emitted. For non- radiative recombination, energy is liberated in the form of heat.

The colour of the light is determined by the energy band gap of the material. Therefore, LEDs are available in a wide range of colours such as blue (SiC), green (AlGaP) and red (GaAsP). Now a days, LED which emits white light (GalnN) is also available.

(b) Give the applications of ICT in mining and agriculture sectors.
Answer:
(i) Agriculture
The implementation of information and communication technology (ICT) in agriculture sector enhances the productivity, improves the living standards of farmers and overcomes the Challenges and risk factors.