Question 1.
A thin conducting spherical shell of radius R has a charge Q which is uniformly distributed on its surface. the correct plot for electrostatic potential due to this spherical shell is ………

Question 11.
Suppose an alpha particle accelerated by a potential of V volt is allowed to collide with a nucleus whose atomic number is Z, then the distance of closest approach of alpha particle to the nucleus is…..

Question 17.
State the principle of potentiometer.
Answer:
The basic principle of a potentiometer is that when a constant current flows through a wire of uniform cross-sectional area and composition, the potential drop across any length of the wire is directly proportional to that length.

Question 18.
Compute the intensity of magnetisation of the bar magnet whose mass, magnetic moment and density are 200 g, 2 A m2 and 8 g cm-3, respectively.
Answer: 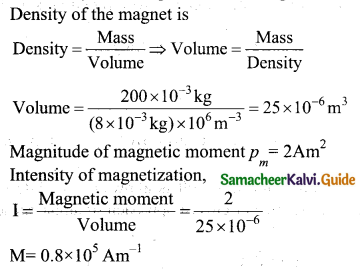 Question 21.
Calculate the de Broglie wavelength of a proton whose kinetic energy is equal to. 81.9 x 1015 (Given: mass of proton is 1836 times that of electron).
Answer:

Question 24.
Give the factors that are responsible for transmission impairments.
Answer:

Question 27.
An electronics hobbyist is building a radio which requires 150 ft in her circuit, but she has only 220 Ω 79 Ω and 92 Ω resistors available. How can she connect the available resistors to get desired value of resistance?
Answer:
Required effective resistance = 150 ft
Given resistors of resistance, R = 220 ft, R = 79 ft, R = 92 ft
Parallel combination of R1 and R2

Question 30.
Give the characteristics of image formed by a plane mirror.
Answer:

Question 31.
An electron and an alpha particle have same kinetic energy. How are the de Broglie wavelengths associated with them related?
Answer:

Question 32.
Assuming VCEsat = 0.2 V and β = 50, find the minimum base current (IB) required to drive the transistor given in the figure to saturation.
Answer: 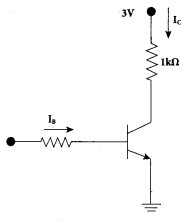 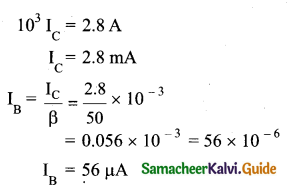 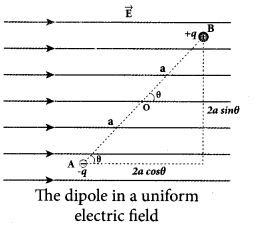 In addition to p and E, the potential energy also depends on the orientation θ of the electric dipole with respect to the external electric field.

(b) Deduce the relation for the magnetic induction at a point due to an infinitely long straight conductor carrying current.
Answer:
Magnetic field due to long straight conductor carrying current: Consider a long straight wire NM with current I flowing from N to M. Let P be the point at a distance a from point O.
Consider an element of length dl of the wire at a distance l from point O and \(\vec{r} \) be the vector joining the element dl with the point P. Let θ be the angle between \(d \vec{l} \text { and } \vec{r}\). Then, the magnetic field at P due to the element is
\(d \overrightarrow{\mathrm{B}}=\frac{\mu_{0} \mathrm{Id} l}{4 \pi r^{2}} \sin \theta\)(unit vector perpendicular to \(d \vec{l} \text { and } \vec{r}\) 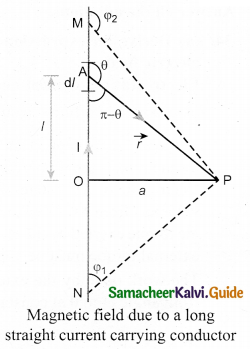 The direction of the field is perpendicular to the plane of the paper and going into it. This can be determined by taking the cross product between two vectors \(d \vec{l} \text { and } \vec{r}\)
(let it be \(\hat{n}\)). The net magnetic field can be determined by integrating equation with proper limits. \(\overrightarrow{\mathrm{B}}=\int d \overrightarrow{\mathrm{B}}\) From the figure, in a right angle triangle PAO, 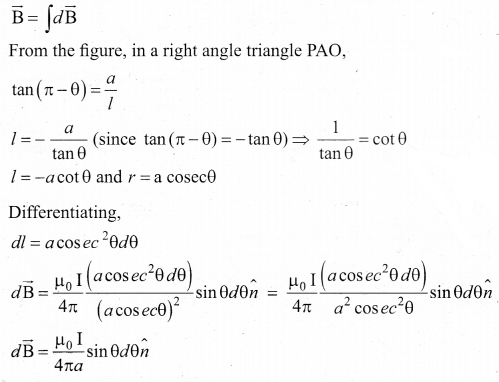 Question 35.
(a) Obtain an expression for motional emf from Lorentz force.
Answer:
Motional emf from Lorentz force: Consider a straight conducting rod AB of length l in a uniform magnetic field \(\vec{B}\) which is directed perpendicularly into the plane of the paper. The length of the rod is normal to the magnetic field. Let the rod move with a constant velocity \(\vec{v}\) towards right side. When the rod moves, the free electrons present in it also move with same velocity \(\vec{v}\) in B. As a result, the Lorentz force acts on free electrons in the direction from B to A and is given by the relation  \(\overrightarrow{\mathrm{F}}_{\mathrm{B}}\)=-
\( e(\vec{v} \times \overrightarrow{\mathrm{B}}) \) …………. (1)

The magnitude of the electric field E keeps on increasing as long as accumulation of electrons at the end A continues. The force \(\overrightarrow{\mathrm{F}}_{\mathrm{B}}\) also increases until equilibrium is reached. At equilibrium, the magnetic Lorentz force \(\overrightarrow{\mathrm{F}}_{\mathrm{B}}\) and the coulomb force F balance each other and no further accumulation of free electrons at the end A takes place,
i.e 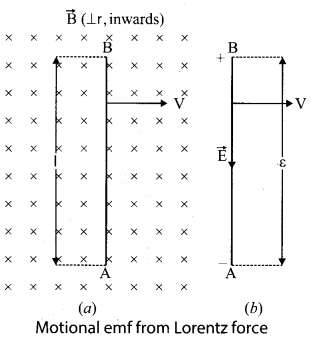 (b) Explain the Maxwell’s modification of Ampere’s circuital law.
Answer:
Maxwell argued that a changing electric field between the capacitor plates must induce a magnetic field. As currents are the usual sources of magnetic fields, a changing electric field must be associated with a current. Maxwell called this current as the displacement current.

If ‘A’ be the area of the capacitor plates and ‘cf be the charge on the plates at any instant ‘f during the charging process, then the electric field in the gap will be 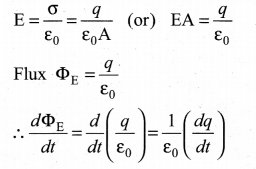 This is the missing term in Ampere’s Circuital Law. The total current must be the sum of the
conduction current Ic Hence, the modified form of the ampere’s law.
\(\oint_{c} \overrightarrow{\mathrm{B}} \cdot \overrightarrow{d l}=\mu_{0}\left(\mathrm{I}_{c}+\varepsilon_{0} \frac{d \Phi_{\mathrm{E}}}{d t}\right)\) 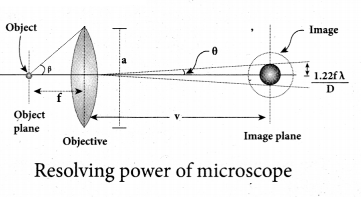 To further reduce the value of dmin the optical path of the light is increased by immersing the objective of the microscope into a bath containing oil of refractive index n.

The average binding energy per nucleon is the energy required to separate single nucleon from the particular nucleus. \(\overline{\mathrm{BE}}\) is plotted against A of all known nuclei. 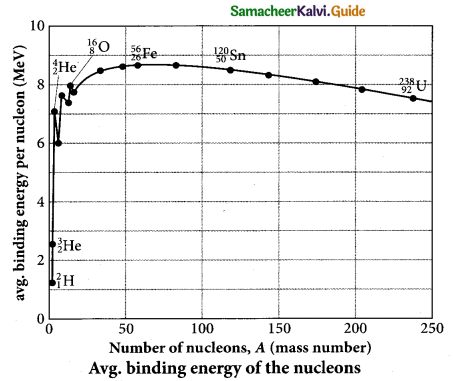 Important inferences from of the average binding energy curve:

(b) State Boolean laws. Elucidate how they are used to simplify Boolean expressions with suitable example.
Answer:
Laws of Boolean Algebra: The NOT, OR and AND operations are \(\bar{A}\), A + B, A.B are the Boolean operations. The results of these operations can be summarised as:

The complement law can be realised as \(\overline{\mathrm{A}}\) = A 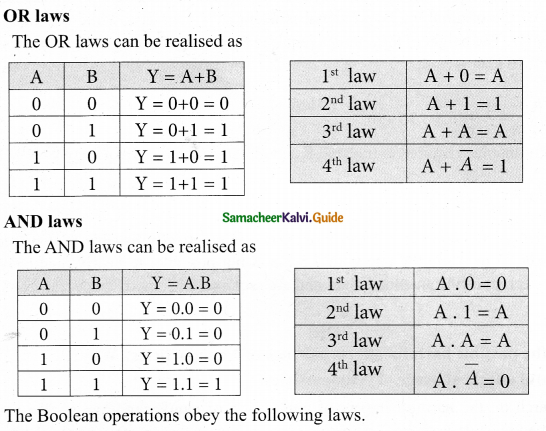 Question 38.
(a) Modulation helps to reduce the antenna size in wireless communication – Explain. Antenna size:
Answer:
Antenna is used at both transmitter and receiver end. Antenna height is an important parameter to be discussed. The height of the antenna must be a multiple of \(\frac{\lambda}{4}\)
\(h=\frac{\lambda}{4}\) ……………….. (1)
where X is wavelength \(\left(\lambda=\frac{c}{v}\right), c\) c is the velocity of light and v is the frequency of the signal v to be transmitted.

Comparing equations (2) and (3), we can infer that it is practically feasible to construct an antenna of height 75 m while the one with 7.5 km is not possible. It clearly manifests that modulated signals reduce the antenna height and are required for long distance transmission.

The research on the harmful impact of application of nanotechnology is also equally important and fast developing. The major concern here is that the nanoparticles have the dimensions same as that of the biological molecules such as proteins. They may easily get absorbed onto the surface of living organisms and they might enter the tissues and fluids of the body.

The interaction with living systems is also affected by the dimensions of the nanoparticles. For instance, nanoparticles of a few nanometers size may reach well inside biomolecules, which is not possible for larger nanoparticles. Nanoparticles can also cross cell membranes.

It is also possible for the inhaled nanoparticles to reach the blood, to reach other sites such as the liver, heart or blood cells. Researchers are trying to understand the response of living organisms to the presence of nanoparticles of varying size, shape, chemical composition and surface characteristics.