Question 1.
Match items in column -I with the items of column – II and assign the correct code: 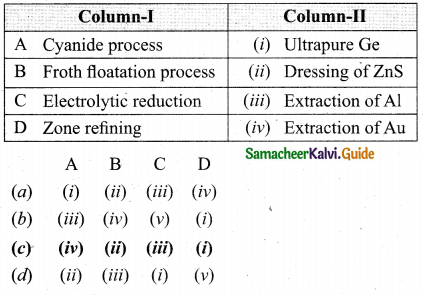 Question 4.
Which metal is used in manufacturing artificial joints?
(a) Molybdenum
(b) Titanium
(c) Tungsten
(d) Iron
Answer:
(b) Titanium

Question 8.
The following solutions were prepared by mixing different volumes of NaOH of HC1 different concentrations.

Question 12.
Consider the following statements:
(i) In Rosenmund reduction Barium sulphate act as a Catalyst poison palladium catalyst, so that aldehyde cannot be further reduced to alcohol
(ii) Side chain oxidation of toluene using strong oxidising agent gives benzoic acid.
(iii) Friedle crafts reaction is the best method used to prepare aliphatic ketones.
Which of the above statement is/are correct?
(a) (iii) only
(b) (i) & (ii)
(c) (i) & (iii)
(d) (ii) & (iii)
Answer:
(b) (i) & (ii)

Question 16.
Predict the conditions under which
(а) Aluminium might be expected to reduce magnesia.
(b) Magnesium could reduce alumina.
Answer:
The conditions under which:
(a) Ellingham diagram is used to predict thermodynamic feasibility of reduction of oxides of one metal by another metal. Any metal can reduce the oxides of other metals that are located above it in the Ellingham diagram. In the Ellingham diagram, for the formation of magnesia (magnesium oxide) occupy lower position than aluminium oxide. Therefore aluminium cannot be used to reduce the oxides of magnesium (magnesia). Above 1623K, A1 can reduce MgO to Mg, so that ArG° becomes negative and the process becomes thermodynamically feasible.

At the point of intersection of the Al2O3 and MgO curves in
Ellingham diagram. ∆G0 becomes zero for the reaction.

Question 17.
Give the uses of carbon dioxide.
Answer:

Therefore, the coordination entity is [Cu(NH3)4]2+

Question 22.
When phenol is treated with propan-2-ol in the presence of HF, Friedel-Craft reaction takes place. Identify the products.
Answer:

Question 24.
What are antibiotics?
Answer:
Antibiotics is a chemical substance produced by one microorganism, that selectively inhibits die growth of another micro organism. Example : penicillins and cephalosporins.

Question 25.
Explain the types of silicones.
Answer:
(i) Linear silicones: They are obtained by the hydrolysis and subsequent condensation of dialkyl or diaryl silicon chlorides. 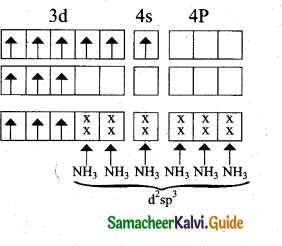 Hybridisation and formation of [Ni(CN)4]-2 Complex

Since CN– is strong field ligand, hence the electrons in 3d orbitals are forced to pair up and there is no impaired electron in [Ni(CN)4]2-, hence it’should be diamagnetic substance.

Question 28.
A first order reaction is 20% completed in 10 minutes. Calculate the time taken for the reaction to go to 80% completion.
Answer:
Applying the first order equation,

Question 29.
Explain common ion effect with an example.
Answer:
Common Ion Effect: When a salt of a weak acid is added to the acid itself, the dissociation of the weak acid is suppressed further.
Acetic acid is a weak acid. It is not completely dissociated in aqueous solution aid hence the following equilibrium exists.
CH3COOH (aq) ⇌ H+ (aq)+ CH3OO–(aq)
However, the added salt, sodium acetate, completely dissociates to produce Na+ and CH3COO– ion.
CH3COONa (aq) → Na+(aq) + CH3COO– (aq) .

Hence, the overall concentration of CH3COO– is increased, and the acid dissociation equilibrium is disturbed. We know from Le chatelier’s principle that when a stress is applied to a system at equilibrium, the system adjusts itself to nullify the effect produced by that stress. So, in order to maintain the equilibrium, the excess CH3COO– ions combines with H+ ions to produce much more unionized CH3COOH i.e., the equilibrium will shift towards the left. In other words, the dissociation of CH3COOH is suppressed. Thus, the dissociation of a weak acid (CH3COOH) is suppressed in the presence of a salt (CH3COONa) containing an ion common to the weak electrolyte. It is called the common ion effect.

Question 33.
Answer the following questions briefly:
(i) What are reducing sugars?
(ii) What is meant by denaturation of a protein?
(iii) How is oxygen replenished in our atmosphere?
Answer:
(i) Reducing sugar: All those Carbohydrates which reduce Fehling’s solution and Tollens’ reagent are referred to as reducing sugars. All monosaccharides whether aldose or ketose are reducing sugars.

(iii) We take oxygen from atmosphere and release CO2. Plants take up CO2 and H2O from the atmosphere to prepare their food in the presence of sunlight and release O2, thus O2 is replenished in atmosphere.

Question 34.
(a) (i) What is Cementation? (2)
(ii) Write a notes on ionisation enthalpy in p-block elements? (3)
[OR]
(b) (i) Give the uses of sulphuric acid.. (2)
(ii) How alloys are formed in d-block elements? (3)
Answer:
(а) (i) Gold can be recovered by reacting the deoxygenated leached solution with zinc. In this process the gold is reduced to its elemental state (zero oxidation sate) and the process is
called cementation.

(ii) 1. As we move down a group, generally there is a steady decrease in ionisation enthalpy of elements due to increase in their atomic radius.

2. In p-block elements there are some minor deviations to this general trend. In group 13, from B to A1 the ionisation enthalpy decreases as expected. But from A1 to T1 there is only a marginal difference. This is due to the presence of inner d- and f – elements which has poor shielding effect compared to s andp electrons. As a result, the effective nuclear charge on the valance electrons increase.

3. A similar trend is also observed in group 14. The remaining groups (15-18) follows the general trend, in these groups the ionisation enthalpy decreases as we move down the group. Here poor shielding effect of d- and/electrons are overcome by the increased shielding effect of the additional p-electrons.

4. The ionisation enthalpy of elements in successive groups is higher than the corresponding elements of the previous group as expected. 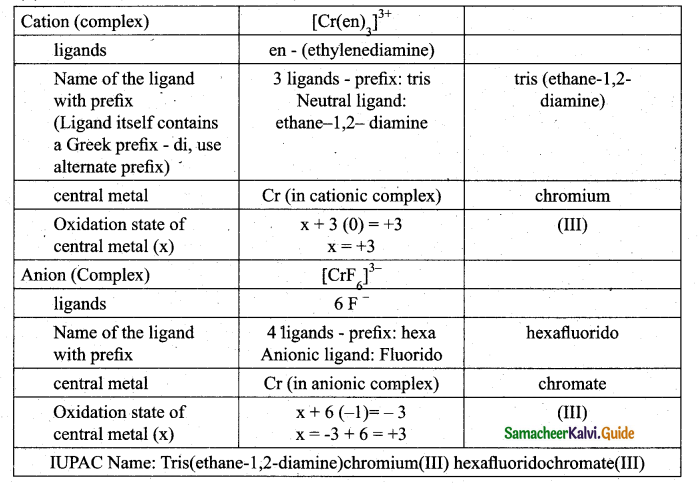 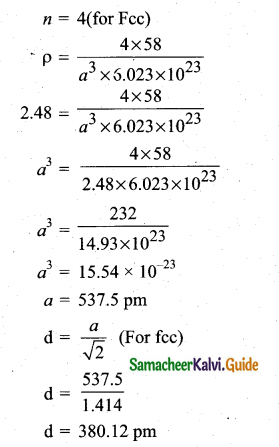 Question 36.
(a) (i) Point out the differences between ionic product and solubility product. (2)
(ii) The solubility of AgCl in water at 298 K is 1.06 × 10-5 mole per litre. Calculate is solubility product at this temperature. (3)
[OR]
(b) (i) Describe about lithium-ion battery and its uses. (3)
(ii) Give reasons for the following (2)
(1) Rusting of iron is quicker in saline water than in ordinary water.
(2) Aluminium metal cannot be produced by the electrolysis of aqueous solution of aluminium salt.
(a) (i)

4. Both electrodes allow Li+ ions to move in and out of their structures. During discharge the Li+ ions produced at the anode moves towards cathode through the non-aquaeous electrolyte.

5. When a potential greater than the emf produced by the cell is applied across the electrode, the cell reaction is reversed and now the Li+ ions move from cathode to anode where they become embedded on the porous electrode. This is known as intercalation.
6. Uses:- This Li-ion battery is used in cellular phones, Laptop computer and digital camera.

(b) (i) Aniline is diazotized with nitrous acid (NaN02 + HC1) at 273-278K to give benzene diazonium chloride which on further treatment with hot water in the presence of mineral acid gives phenol.

Question 38.
(a) (i) An aromatic compound ‘A’ of molecular formula C7H7ON undergoes a series of reactions as shown below. Write the structures of A, B, C, D and E in the following reactions. (5)