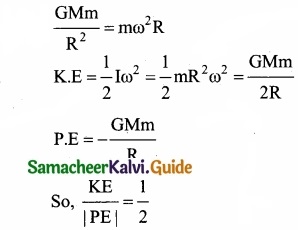 Question 9.
A uniform rope having mass m hangs vertically from a rigid support. A transverse wave pulse is produced at the lower end. Which of the following plots shows the correct variation of speed v with height h from the lower end?
(a)

Question 14.
The increase in internal energy of a system is equal to the work done on the system which process does the system undergo?
(a) Isochoric
(b) Adiabatic
(c) Isobaric
(d) Isothermal
Answer:
(b) Adiabatic

Question 16.
What are the advantages of SI system?
Answer:

Question 19.
Is a single isolated force possible in nature?
Answer:
No. According to Newton’s third law, for every action, there is an equal and opposite reaction. So, whatever case we consider, if there is an action there is always a reaction. So it is impossible.

Question 20.
State the factors on which the moment of inertia of a body depends?
Answer:

Question 25.
Explain variation of ‘g’ with latitude?
Answer:
When an object is on the surface for the Earth, it experiences a centrifugal force that depends on the latitude of the object on Earth. If the Earth were not spinning, the force on the object would have been mg. However, the object experiences an additional centrifugal force due to spinning of the Earth.
OPz, cos λ = \(\frac{PZ}{OP}\) = \(\frac{R’}{R}\)
R’ = R cos λ 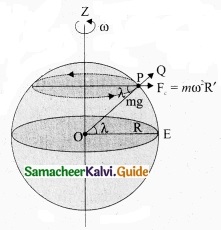 (b) We can associate a vector with a plane area. Such a vector is called area vector and its direction is represented by a normal drawn outward to the area.

Question 27.
What is mean by inertia? Explain its types with example?
Answer:
The inability of objects to move on its own or change its state of motion is called inertia.
Inertia means resistance to change its state. There are three types of inertia:

1. Inertia of rest: The inability of an object to change its state of rest is called inertia of rest.
Example:

2. Inertia of motion: The inability of an object to change its state of uniform speed (constant speed) on its own is called inertia of motion.
Example:

Question 28.
A light body and body with greater mass both are having equal kinetic energy. Among these two which one will have greater linear momentum?
Answer:
Given Data:
E1 – E2 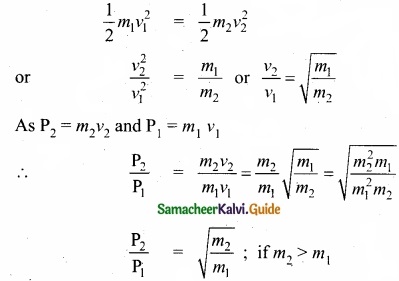 Question 29.
Three particles of masses m1 = 1 kg, m2 = 2 kg and m3 = 3 kg are placed at the corners of an equilateral triangle of side lm as shown in Figure. Find the position of center of mass?
Answer:
The center of mass of an equilateral triangle lies at its geometrical center G.
The positions of the mass m1, m2 and m3 are at positions A, B and C as shown in the Figure. From the given position of the masses, the coordinates of the masses m1 and m2 are easily marked as (0,0) and (1,0) respectively. 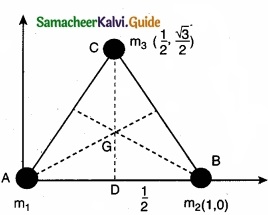 The true value of a certain length is near 5.678 cm. In one experiment, using a measuring instrument of resolution 0.1 cm, the measured value is found to be 5.5 cm. In another experiment using a measuring instrument of greater resolution, say 0.01 cm, the length is found to be 5.38 cm. We find that the first measurement is more accurate as it is closer to the true value, but it has lesser precision. On the contrary, the second measurement is less accurate, but it is more precise. 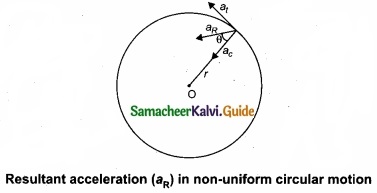 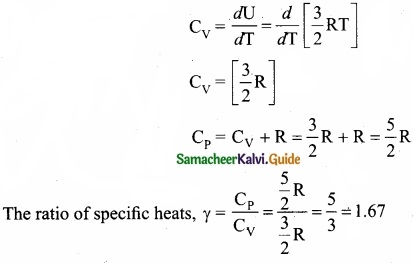 Question 34 (a).
State kegler’s laws of planetary motion?
Answer:
1. Law of Orbits:
Each planet moves around the Sun in an elliptical orbit with the Sun at one of the foci.

2. Law of area:
The radial vector (line joining the Sun to a planet) sweeps equal areas in equal intervals of time.

To find the resultant of the two vectors we apply the triangular law of addition as follows:

Represent the vectors \(\vec { A } \) and \(\vec { B } \) by the two adjacent sides of a triangle taken in the same order. Then the resultant is given by the third side of the triangle as shown in figure. 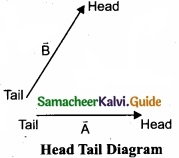 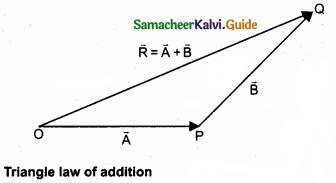 1. Magnitude of resultant vector:
The magnitude and angle of the resultant vector are determined by using triangle law of vectors as follows. From figure, consider the triangle ABN, which is obtained by extending the side OA to ON. ABN is a right angled triangle. 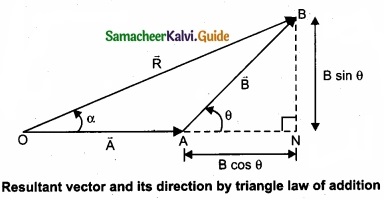 Distance travelled by the liquid in time t is d = vat

Therefore, the work done is W = FAd = PAaAvAt
But aAvAt = aAd = V, volume of the liquid entering at A.

Potential energy of the liquid at A,
PEA = mg hA

This arises due to the fact that in a fluid flow, the layers flowing with different velocities exert frictional forces on each other. This loss of energy is generally converted into heat energy. Therefore, Bernoulli’s relation is strictly valid for fluids with zero viscosity or non-viscous liquids. Notice that when the liquid flows through a horizontal pipe, then
h = 0 ⇒ \(\frac{P}{\rho g}+\frac{1}{2} \frac{v^{2}}{g}\) = Constant

(b) The escape velocity v of a body depends on

(II) The law of tension:
For a given vibrating length I (fixed) and mass per unit length p (fixed) the frequency varies directly with the square root of the tension T,
f ∝\(\sqrt{T}\)
⇒f = A\(\sqrt{T}\), where A is constant

(d) Explain how to determine the frequency of tuning for k using sonometer?
Answer:
Working: A transverse stationary or standing wave is produced and hence, at the knife edges P and Q, nodes are formed. In between the knife edges, anti-nodes are formed. If the length of the vibrating element is l then
l = \(\frac{\lambda}{2}\) ⇒ λ = 2l
Let f be the frequency of the vibrating element, T the tension of in the string and µ the mass per unit length of the string. Then using equation ,we get
f = \(\frac{v}{\lambda}=\frac{1}{2 l} \sqrt{\frac{T}{\mu}}\) in Hertz …………………. (1)

Let ρ be the density of the material of the string and d be the diameter of the string. Then the mass per unit length µ, 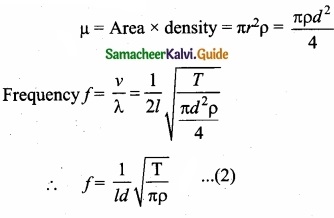 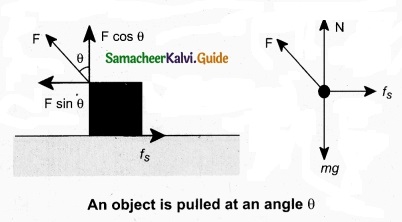 Equation (3) shows that the normal force needs is less than Npush. From equations (1) and (3), it is easier to pull an object than to push to make it move.

(b) Derive an expression for the velocities of two objects colliding elastically in one dimension?
Answer:
Consider two elastic bodies of masses m1 and m2 moving in a straight line (along positive x direction) on a frictionless horizontal surface as shown in figure.

In order to have collision, we assume that the mass m1 moves, faster than mass m2 i.e., u1 > u2. For elastic collision, the total linear momentum and kinetic energies of the two bodies before and after collision must remain the same. 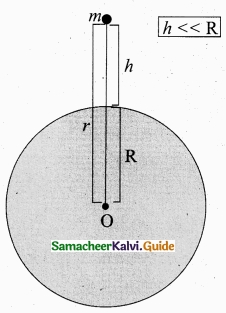 Here r = Re + h, where Re is the radius of the Earth, h is the height above the Earth’s surface 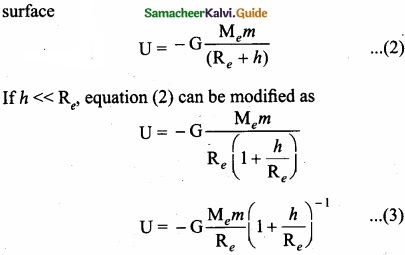 By using Binomial expansion and neglecting the higher order

(b) Derive an expression for Radius of gyration?
Answer:
For bulk objects of regular shape with uniform mass distribution, the expression for moment of inertia about an axis involves their total mass and geometrical features like radius, length, breadth, which take care of the shape and the size of the objects.

As the radius of gyration is distance, its unit is m. Its dimension is L. A rotating rigid body with respect to any axis, is considered to be made up of point masses m1, m2, m3, . . . mn at perpendicular distances (or positions) r1, r2, r3 . . . rn respectively as shown in figure. The moment of inertia of that object can be written as, 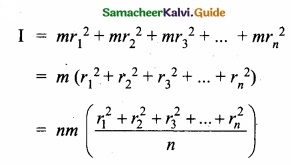 where, nm is the total mass M of the body and K is the radius of gyration.

The expression for radius of gyration indicates that it is the root mean square (rms) distance of the particles of the body from the axis of rotation. In fact, the moment of inertia of any object could be expressed in the form, I = MK2 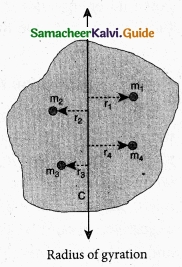