Question 7.
Who is the Father of Economics?
(a) Max Muller
(b) Adam Smith
(c) Karl Marx
(d) Paul A Samuelson
Answer:
(b) Adam Smith

Question 17.
Which of the following is not a characteristic of land?
(a) Its limited supply
(b) It is mobile
(c) Heterogeneous
(d) Gift of Nature
Answer:
(b) It is mobile

Globalization:
Globalization refers to the integration of the domestic (Indian) economy with the rest of the world. Import liberalization through reduction of tariff and non – tariffbarriers, opening the doors to Foreign Direct Investment (FDI) and Foreign Portfolio Investment (FPI) are some of the measures towards globalization.

Question 23.
Why was structural reform implemented in Indian Economy?
Answer:

Question 24.
What is selling costs?
Answer:

Question 25.
What are major ports in Tamil Nadu?
Answer:

Question 26.
Mention any four food crops which are favourable to Tamil Nadu?
Answer:

Question 27.
What is Selling cost?
Answer:

Question 28.
What do you mean by Rural Development?
Answer:

Question 32.
Write a short note on Marginal Revenue?
Answer:
1. Marginal Revenue [MR] is the addition to the total revenue by the sale of an additional unit of a commodity.

2. MR can be found out by dividing change in total revenue by the change in quantity sold out.

4. The other method of estimating MR is:

Question 34.
Explain the theory of “consumer’s surplus”?
Answer:
Alfred Marshall defines consumer’s surplus as “the excess of price which a person would be willing to pay a thing rather than go without the thing, over that which he actually does pay is the economic measure of this surplus satisfaction. This may be called consumers surplus”.

Question 35.
List out the objectives of MUDRA Bank?
Answer:

1. In the long run all factors of production become variable. The existing size of the firm can be increased in the case of long run. There are neither fixed inputs nor fixed costs in the long run.

2. LAG is given in diagram. 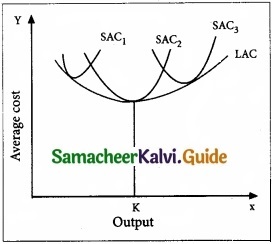 Question 40.
State the importance of Rural Development?
Answer:
1. A major share of population lives in rural areas, and their development and contributions are very much supportive for the nation building activities. India cannot be developed by retaining rural as backward.

2. The rural economy Supports the urban sectors by way of supplying drinking water, milk, food and raw materials. Hence, the backwardness of the rural sector would be a major impediment to the overall progress of the economy.

3. Improvements in education, health and sanitation in villages can help avoid many urban problems namely, begging, rag-picking and road side slumming.

4. Development of agriculture and allied activities are necessary for providing gainful employment in rural areas and improving overall food production.

Question 41 (a).
Bring out Jawaharlal Nehru’s contribution to the idea of economic development?
Answer:

(I) Democracy and Secularism:

(b) Describe the Salient features of EXIM policy [2015 – 2020]
Answer:
The new EXIM policy has been formulated focusing on increasing in exports Scenario, boosting production and supporting the concepts like Make in India and Digital India.

Production possibility curve shows the menu of choice along which a society can choose to substitute one good for another, assuming a given , state of technology and given total resources.

2. The explanation and analysis of production possibility curve is based upon certain assumptions, some of them are following:

Production possibilities schedule:
1. The schedule suggests that if all resources are thrown into the production of food, a maximum of 500 tons of food can be produced, given the existing technology. If on the other hand, all resources are instead used for producing cars, 25 cars can be produced. In between these two extreme possibilities exist. If we are willing to give up some food, we can have some cars.

Problems of the economy:

2. Solution of central problems:
The central problems of an economy can be explained with the help of PPC. The solution of problem of what to produce involves the decision regarding the choice of location on the production possibility carves. A production combination represented by any point inside the PPC indicates that the economy is using inefficient methods of production and inefficient combination of resources.

(b) Elucidate the law of diminishing marginal utility with diagram?
Answer:
Introduction:
H.H.Gossen, an Austrian Economist was the first to formulate this law in Economics in 1854. Therefore Jevons called this law as “ Gossen’s First Law of Consumption”. But credit goes to Marshall, because he perfected this law on the basis of Cardinal Analysis. This law is based on the characteristics of human wants, i.e. wants are satiable.

Definition:
Marshall states the law as “ the additional benefit which a person derives from a given increase of his stock of a thing, diminishes with every increase in the stock that he already has”.

Explanation:
The Law of Diminishing Marginal utility states that if a consumer continues to consume more and more units of the same commodity, its marginal utility diminishes. This means that the more we have of a thing, the less is the satisfaction or utility that we derive from the additional unit of it.

The Law of Diminishing Marginal utility: 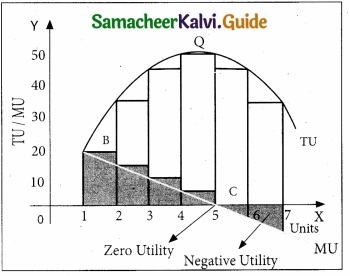 (b) Explain the Agrarian crisis after reforms?
Answer:
(I) High input costs:

1. India has a mixed economy:

(b) Explain the role of SSIs in economic development?
Answer:
1. Provide Employment:

3. Help in Mobilization of Local Resources:

4. Pave for Optimisation of Capital:

1. SSIs do not require sophisticated machinery. Hence, import the machines from abroad is not necessary. On the other hand, there is a great demand for goods produced by SSIs. Thus they reduce the pressure on the country’s balance of payments. However, with recent past large scale industries are able to borrow large funds with low interest rate and spend large sums on advertisements. Hence SSSs are gradually vanishing.

Assumptions:
Laws of Returns to Scale are based on the following assumptions.

Three Phases of Returns to Scale:

The three laws of returns to scale can be explained with the help of the diagram below.

Because, between these two points inputs have doubled and output also has doubled. Decreasing returns to scale are denoted by the movement from the point c to point d since doubling the factors from 4 units to 8 units product less than the increase in inputs, that is by 33.33%.

(b) Explain the internal and external economies of scale?
Answer:
Internal Economics of Scale:

In Economics, the uses of mathematical and statistical tools need the support of ICT for:

De – reservation of the Industrial Sector:

(I) Poverty of Farmers:

(IV) Money Lenders and High Rate of Interest:
The rate of interest charged by the local money lenders is very high and the compounding of interest leads to perpetuate indebtedness of the farmer.