III. Find out the correct statement

Question 1.
(i) ChengizKhan was an intolerant person in religion.
(ii) Mongols destroyed the city of Jerusalem
(iii) Crusades weakened the Ottoman Empire
(iv) Pope Gregory succeeded in making King Henry IV to abdicate the throne by means of Interdict
(a) (i) is correct
(b) (ii) is correct
(c) (ii) and (iii) are correct
Answer:
(d) (iv) is correct

Question 3.
(i) Boyang and Changon were built during the Sung dynasty.
(ii) Peasant uprisings led to the collapse of the Tang dynasty.
(iii) Seljuq Turks were a tribe of Tartars.
(iv) Mongols established their rule in China in the name of the Yuan dynasty
(a) (i) is correct
(b) (ii) is correct
(c) (iii) is correct
(d) (iv) is correct
Answer:
(ii), (iii) and (iv) are correct

Question 3.
How was Feudalism organized in the Middle Ages?
Answer: 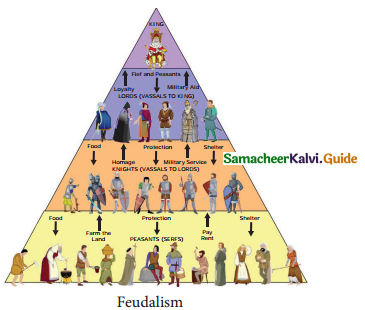 VI. Answer all the questions given under each caption.

Question 1.
Shogunate in Japan
(a) Name the two Daimyo families that fought for power in Japan.
(b) Who emerged successful in the fight?
(c) What was the title given by the Emperor to the victorious?
(d) Where was the capital of the first Shogunate established?
Answer:
(a) Tara and Minamoto.
(b) Yoritomo emerged successful in the fight.
(c) In A.D 1192, the emperor gave him the high sounding title of Sei-i-tai-Shogun, which means the Barbarian-subduing-Great-General
(d) Yoritomo established his military capital at Kamakura.

Question 2.
Rule of Abbasids
(a) Who were Abbasids?
(b) What was the title assumed by Abbasid Caliph?
(c) Where did they have their new capital?
(d) In whose period was the Abbasid Empire at the height of its glory?
Answer:
(a) The branch which descended from Prophet Mohammad’s uncle Abbas were called Abbasids.
(b) Abbasid Caliph assumed the title of “The Commander of the Faithful”
(c) The capital was shifted from Damascus to Baghdad in Iraq.
(d) The Abbasid Empire was at the height of its glory during the reign of Harun-al-Rashid.

Question 1.
Write about crusades and its impact.
Answer:

Question 2.
Who were the Mongols? How did they rule China?
Answer:

Question 1.
In an outline map of Europe, the students are to sketch the extern of Ottoman Empire at height of its glory.
Answer: 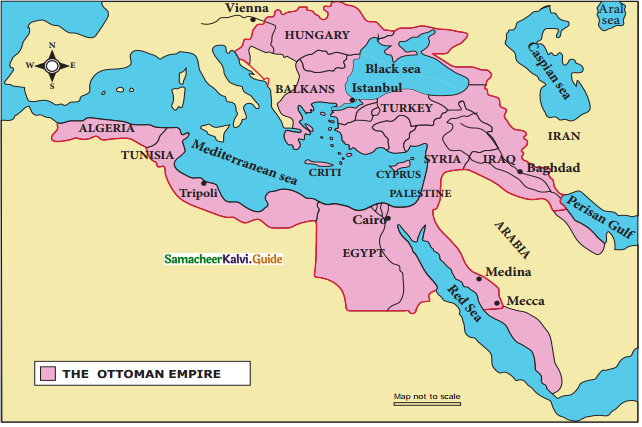 I. Choose the correct answers

II. Find out the correct statement

III. Fill in the blanks

V. Answer all questions given under each heading

Question 1.
Middle Ages
(a) Which period is named as Middle Ages?
(b) What is meant by early Middle Ages?
(c) Explain the Central or high Middle Ages.
(d) What represented the later Middle Ages?
Answer:
(a) Historians call the period between the end of the Roman Empire in 476 A.D. and the capture of Constantinople by the Turks in 1453 A.D. as the Middle Ages
(b) In the early Middle Ages, Christianity, followed by Islam, began to establish themselves as dominant religions of continental Europe.
(c) The central or high Middle Ages witnessed rapid development, marked by territorial
expansion, demographic and” urban growth, and the restructuring of secular and ecclesiastical institutions.
(d) The later Middle Ages was represented by the feudal system. This was followed by a period of decline and decay.

Question 2.
Tang dynasties
(a) Name the two Capital Cities built by Tang dynasties.
(b) How were the aristocratic class counter balanced?
(c) Mention the sources of revenue.
(d) Who led a mutiny and what was the result?
Answer:
(a) Tang dynasty built the two Capital cities Boyang and Chang-on.
(b) Scholar officials, trained in Confucius Philosophy, were appointed to counterbalance the landowning aristocratic class.
(c) Mention the sources of revenue.

(d) A mutiny was led by a frontier general An Lu-shan, which led to years of turmoil. The imperial authority was very much reduced during this period.

Question 3.
Great wall of China
(a) When was the Great wall of China built?
(b) Why was it built?
(c) Mention the contribution of Chin (Qin) Dynasty towards the Great Wall of China.
(d) How long is it now?
Answer:
(a) Between 8th and 7th centuries B.C. (BCE), the warring states in China built defensive walls.
(b) It was built to protect themselves from enemies from the north.
(c) During Chin (Qin) Dynasty, the separate walls were connected and consequently the wall stretched from east to west for about 5000 kilometres. This wall, considered to be one of the wonders of the world, served to keep nomadic tribes out.
(d) Now it is 6,700 kilometres in length.

Question 4.
Sung Dynasty
(a) What sounded death knell to Tang empire?
(b) What happened to the empire?
(c) What about the achievements of the Sung Dynasty?
(d) What was the end of the Sung Dynasty?
Answer:
(a) The rebellion of hard-pressed peasantry under the leadership of Hung Ch’ao dealt a death knell to Tang empire.
(b) The empire split into five rival states, until it was reunited under the Sung Dynasty.
(c) Trade and industry flourished. Iron and steel industries became highly organized. It was a period of great prosperity to the landowning class, officials and rich merchants.
(d) The peasants that suffer alone to poverty. Before any internal crisis could develop, there were two external invasions from the north that ended the Sung dynasty.

Question 5.
Yuan Dynasty
(a) Who formed the Yuan Dynasty?
(b) Who was Mangu Khan?
(c) Who was appointed as the Governor of China?
(d) Who captured the Mangoi Capital in 1369?
Answer:
(a) The Mongols established their rule in China with the name of Yuan Dynasty.
(b) Mangu Khan became the Great Khan in 1252.
(c) Kublai Khan was appointed as Governor of China.
(d) The leader of “Red Turbans” Chu Yuan Chang took the Mongol capital Beijing and proclaimed himself emperor in 1369.

Question 7.
Islam
(a) How did Islam have a great appeal to the people of the world?
(b) Explain the term Hijrat?
(c) Who laid the foundation for Islamic empire?
(d) What happened to the city of Jerusalem?
Answer:
(a) Islam gave a message of brotherhood. Mohammad laid stress on the equality of all those who were Muslims. This message of equality and brotherhood had great appeal not only for the Arabs but to people in other parts of the world.
(b) When faced with persecution in his place of birth, Mohammad and his followers moved to the city of Yethrib (Medina). The flight of Mohammad from Mecca in 622 AD (CE) is called Hijrat in Arabic.
(c) Abu Bakr and Omar who succeeded Prophet Mohammad as Khalif or Caliph laid the foundation for an Islamic Empire.
(d) Jerusalem, the holy city of Jews and Christians, was won by the Arabs.

Question 8.
Umayyad dynasty
(a) How long did the Umayyad rule?
(b) Name their Capital.
(c) What type of new achievement did the Umayyad introduced ?
(d) By whom were the Umayyad over thrown?
Answer:
(a) Umayyads ruled for about 100 years.
(b) Damascus was their capital.
(c) They developed a new style of architecture known as Saracenic architecture. The arches, the pillars, and the minarets and domes came to India later and blended with Indian ideas.
(d) Umayyads were thrown by Abbasids.

Question 9.
Crusades
(a) What is meant by Crusades?
(b) What resulted in Crusades?
(c) How long was Jerusalem in Ottoman hands?
(d) What was the end of Abbasid Empire?
Answer:
(a) The struggle between Christianity and Islam beginning in 1095 continued for nearly 200 years and is called the Crusades.
(b) The Christian pilgrims to the holy city of Jerusalem were put to a lot of hardships by the Turks. This resulted in Crusades.
(c) Jerusalem continued to remain in Ottoman hands for another 700 years.
(d) The destruction of Baghdad in 1258 A.D. by the Mongols, put an end to the Abbasid Empire.

Question 10.
Feudalism
(a) Wo was the head of the feudal regime?
(b) What is meant by fief?
(c) Who formed the socio-political structure?
(d) What was the role played by the merchants and artisans?
Answer:
(a) The king was at the head of the feudal regime.
(b) Fief was a piece of land given to someone by their lord, to whom they had a duty to provide particular services in return.
(c) The Bishops, Abbots and Cardinals and the Church came under this socio-political structure.
(d) The merchants and artisans formed guilds and groups. In course of time they became wealthy enough to defy even the nobles and the kings. This development led to the end of feudal system.

Question 12.
The Chalukyas
(a) When did the Chalukyas kingdom exist?
(b) Write about Khusrau II?
(c) Name the capital of the Chalukya kingdom.
(d) What is remarked by Hiuen Tsang, the Chinese traveller, about the Chalukyas?
Answer:
(a) The Chalukya kingdom existed contemporaneously with the rule of Sassanid dynasty in
Persia.
(b) Khusrau II, the last great king of Sassanid dynasty had a close relationship with the Tang dynasty in China, and the Chalukya ruler Pulakesin II. They exchanged ambassadors.
(c) Badami was their capital.
(d) According to Hiuen Tsang, ‘they are warlike and proud-spirited, grateful for favours and revengeful for wrongs’

Question 2.
What was the impact of the Ming empire on China?
Answer:

Question 3.
How did Japan get its name?
Answer:

Question 4.
Who were called Saracens?
Answer:

Question 5.
What is mentioned by Nehru about Baghdad in his “Glimpses of World History” ?
Answer:

Question 6.
Who were Mongol?
Answer:

Question 9.
During the later Middle Ages what developments did Christianity undergo?
Answer: