Question 10.
Which of the following was used as fuel in olden days to smelt iron?
(a) Coke
(b) Charcoal
(c) Firewood
(d) Paper
Answer:
(b) Charcoal

III. Find out the correct statement

Question 1.
What was the condition of labourers houses during the Industrial Revolution?
Answer:
The housing was tiny, dirty, and sickly for the labouring class. Workers had no time to clean or change their own atmosphere even if they wished to, leading to the outbreak of typhoid, cholera, and smallpox.

Haymarket Massacre
A labour protest took place on 4 May 1886, at Haymarket Square in Chicago. What began as a peaceful rally in support of workers striking for an eight-hour day resulted in the killing of several workers by the police. To commemorate the Haymarket Affair 1 May 1887 is observed as Labour Day or May Day or International Worker’s Day. 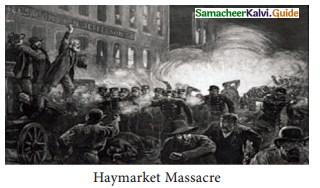 Question 4.
What do you know of Louis Renault?
Answer:

Question 5.
Highlight any two important results of the Industrial Revolution.
Answer:
The invention of the flying shuttle by John Kay and the inventions of Hargreaves, Arkwright, and Crompton within thirty years accelerated the process of spinning and weaving. Because of the loss of the market for hand-woven cotton goods, India lost its old industrial position and became an exporter of raw material. Weavers who were eking out an independent livelihood were thrown out of employment because of the flooding of British factory-made cheap cotton fabrics in Indian markets.

VI. Answer all the questions given under each caption.

Question 1.
Labour Movement
(a) When was the Reform Bill introduced?
(b) To whom did it grant voting right.
(c) Why it was known as Chartism?
(d) What were the demands of the Chartists?
Answer:
(a) 1832
(b) The Chartists called for voting rights to every man over twenty-one years ago.
(c) The charter was presented to the House of Commons (the English lower house in the Parliament, England) Known as Chartism.
(d) The chartists demanded voting rights to every man over twenty-one years of age, secret ballot, annual parliamentary elections and equal representation.

Question 2.
Transportation and Communication
(a) Which was the first railway line opened in England?
(b) How were the produced goods transported to markets?
(c) How was the steamboat invented in the US called?
(d) Who sailed from New York to Albany?
Answer:
(a) The first railway line in England was opened between Stockton and Darlington in 1825.
(b) New networks of canals, roads, and railroads were built. Macadamized roads and George Stephenson’s steam locomotive helped to improve the road and railway transport system in the country.
(c) The steamboat invented in the US in 1807 was called Clermont.
(d) Robert Fulton who invented the steamboat travelled from New York to Albany covering 150 miles.

Question 1.
Enumerate the causes for the Second Industrialization in the USA.
Answer:
A shift from manual labour-based to more technical and machine-based manufacturing industry marked the Industrial Revolution in the United States. Samuel Slater, a citizen of England, having worked at a cotton mill from age 10, had gained enough experience to operate a mill. On learning that Americans were interested in the hew techniques, Slater departed for New York in 1789 illegally. Slater offered his services to Moses Brown, a leading Rhode Island industrialist, who had earlier made an unsuccessful attempt to operate a mill.

Brown agreed and in consequence, the mill became operational in 1793, being the first water-powered roller spinning textile mill in the Americas. By 1800, Slater’s mill had been duplicated by many other entrepreneurs as Slater grew wealthier and his techniques more and more popular. Andrew Jackson, the U.S. President hailed him as “Father of the American Industrial Revolution.”

The United States in the nineteenth century began to show technological innovation. Robert Fulton established the steamboat service on the Hudson River. Samuel F.B. Morse’s invention of the telegraph and Elias Howe’s invention of the sewing machine came before the Civil war (1860-1865).

After the Civil War, industrialization went on at a frantic pace. In 1869, the first transcontinental railroad was completed to transport people, raw materials, and products. There was unprecedented urbanisation and territorial expansion in the US. As a result, between 1860 and 1900, fourteen million immigrants came to the country, providing workers for a variety of industries. The invention of the electric bulb by Thomas Alva Edison (1879) and the telephone by Alexander Graham Bell (1885) changed the world beyond recognition.

Andrew Carnegie established the first steel mills in the U.S for mass production. He acquired business interests in the mines that produced the raw materials for steel, the mills and ovens that created the final product and the railroad and shipping lines that transported goods, thus controlling every aspect of the steelmaking process. John D. Rockefeller merged the operation of many large companies to form a trust. His Standard Oil Trust came to monopolize 90% of the industry and reduced competition. These monopolies affected smaller companies and even threatened them.

The U.S. government supported industrial growth by providing land for the construction of railroads and protected the American industry from foreign competition. The Industrial Revolution quickened the process of the transition of the United States from a rural to an urban society. Young people raised on farms saw greater opportunities in the cities and moved there, as did millions of immigrants from Europe. Providing housing for all the new residents of cities was a problem, and many workers found themselves living in urban slums; open sewers ran alongside the streets, and the water supply was often contaminated, causing disease.

Question 2.
What were the effects of the Industrial Revolution of England on India?
Answer:

(b) The Negative Effects of the Industrial Revolution

Question 2.
Write an assignment on the modern plastic road being made by used-plastics.
Answer:

IV. Find out the correct statement

Question 1.
(i) Industrial Revolution has transferred the agrarian society into a factory system with machine production.
(ii) The banking system in England was very weak.
(iii) Employing human labour cost a very low amount of money.
(iv) Eli Whitney invented the spinning mule.
(a) (i) is correct
(b) (ii) and (iii) are correct
(c) (iii) is correct
(d) (i) and (iv) are correct
Answer:
(a) (i) is correct

V. Answer all the questions given under each caption

(b) What was the quality of the iron?
Answer:
The iron produced was not sturdy and strong. It had to be smelted again.

(b) Mention the new dynamics brought in politics.
Answer:
The rise and growth of cities resulting in rapid urbanisation and organised working-class, movements, seeking voting rights and regulation of their service conditions brought about new dynamics in politics.

(c) How did it affect the environment?
Answer:
The use of chemicals and fossil fuels that replaced wind, water, and firewood resulted in increased air and water pollution.

(d) Write about the report published by the British Parliament in 1842.
Answer:
In 1842, the British Parliament published a report about the state of coal mining – the Mines Report – and the report informed the public that children under five years of age worked underground as trappers for 12 hours a day and for a daily wage of 2 pennies; older girls carried baskets of coal which caused deformities.

(b) What were the conditions of the Labourers?
Answer:
Labourers were not permitted to form trade unions. The governments were influenced by the middle class. All legislations safeguarded their interests.

(c) What was the new ideology born at this time in Europe?
Answer:
It was under these circumstances that socialism as a new ideology was bom in Europe.

(d) What was advocated by Karl Marx?
Answer:
Karl Marx advocated scientific socialism for the protection of the working class from the exploitative policies of the capitalist class.

(b) What did they do on their return?
Answer:
These people on their return to France after the Napoleonic wars used British technology. This helped to accomplish the industrial revolution in their country. The adoption of British-made spindles led to a two-fold increase in French textile production during 1830-1860.

Question 5.
Industrial Revolution in Germany.
(a) How did the national resources of Germany speed up the industrial revolution in Germany?
Answer:
Germany had the natural resources required for an industrial revolution. Large coal reserves were located in the areas of Saar, Ruhr, Upper Silesia, and Saxony. Iron was deposited in the areas of Erzgebirge, Harz Mountains, and Upper Silesia again.

(d) How did the Germans view the Cartels?
Answer:
Germany saw Cartels as providing for the growth of small industries. It spared them from sometimes unprofitable and self districting price wars. It also provided protection in cases of price fluctuations and the entry of foreign competition.

Question 2.
How was Thomas Newcomen helpful to the British Mine owners.
Answer:

Question 3.
What was the contribution of James Watt?
Answer:

Question 5.
Why did coal mines become deeper and deeper?
Answer:

Question 7.
How did the Industrial revolution affect the environment?
Answer:

Question 8.
“Manchester became the textile capital of the world” – Give reasons.
Answer:

Question 9.
When was the new ideology socialism born in Europe?
Answer:

Question 10.
Who were Luddites?
Answer:

Question 11.
What were the demands of Chartism?
Answer:
Known as Chartism, this working-class movement was active between 1836 and 1848. The Chartists called for voting rights to every man over twenty-one years of age, secret ballot (voting), the abolition of the property qualification for members of the parliament, annual parliamentary elections, and equal representation.

Question 13.
What was the impact ef Zollverein Customs Union on Germany?
Answer:

Question 14.
How did Germany surpass the home of the industrial revolution, Great Britain?
Answer:

Question 15.
What was the role played by Andrew Carnegie in the holding of steel?
Answer:

Question 17.
Write about the Great Railroad strike of 1877.
Answer:

Question 18.
When was labour day celebrated in Chennai?
Answer:

Question 3.
Mention the development in textiles due to the industrial revolution in Great Britain.
Answer: