Question 3.
The statistical study of human population is __________
(a) Demography
(b) Morphology
(c) Etymology
(d) Seismography
Answer:
(a) Demography

Question 4.
The extraction of valuable minerals and other geological minerals from the mines, is __________
(a) Fishing
(b) Lumbering
(c) Mining
(d) Agriculture
Answer:
(c) Mining

III. Consider the given statements and choose the right option given below

IV. Answer the following in brief

Question 2.
What is ‘black death’?
Answer:

Question 4.
Write any two ways of how the locals and the government restored Palk Bay.
Answer:

V. Give reasons for the following.

Question 1.
Deforestation is encouraged throughout the world.
Answer:
Deforestation results in many effects like floods and droughts, loss of soil fertility, air pollution, extinction of species, global warming, spread of deserts, depletion of water resource, melting of ice caps and glaciers, rise in sea level and depletion of ozone layer. Therefore, reforestation is encouraged throughout the world in order to conserve our mother Earth.

Question 4.
Population growth has to be brought under control.
Answer:

Question 5.
Sustainable development growth has been set to protect the planet.
Answer:
The excessive usage of natural and manmade resources deplete its availability for the future generation. Hence conservation and awareness are the two important terms that can bring sustainability to our living: When we use the word sustainability to mean maintain, it means to maintain it forever. This is because our actions have a lasting effect on the environment and we should protect it for our future generations.

Question 1.
Birth Rate and Death Rate.
Answer:
Birth rate:
The number of live birth per 1000 children in a country during a year.

Death Rate:
The number of death per 1000 people in a country during a year.

VII. Answer in a paragraph

Question 1.
Explain the factors affecting the distribution of the population.
Answer:
The world population is not uniformly distributed, owing to the following factors. 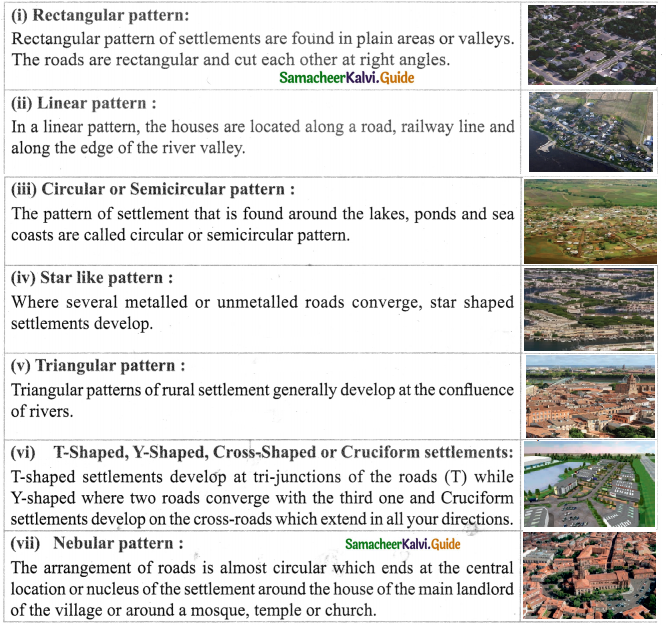 Question A.
On the outline map of the world mark the following. 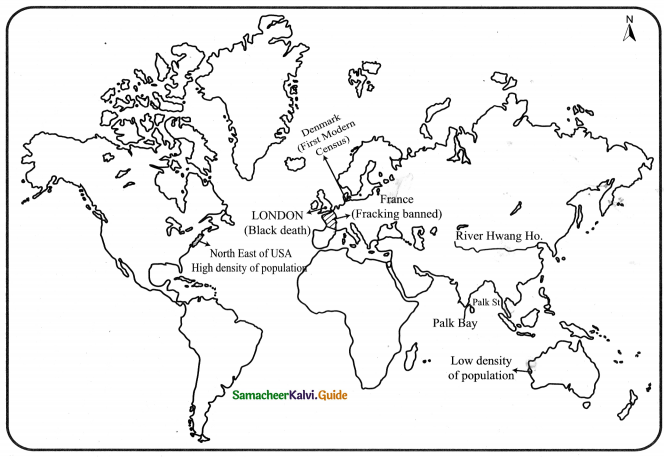 Question B.
On the outline map of Tamil Nadu mark the following. 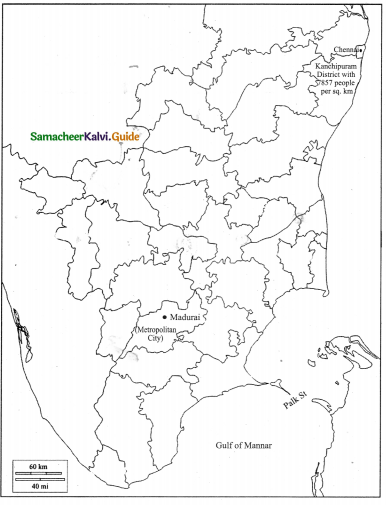 Question 1.
Study your area and write down its settlement pattern.
Answer:

Linear:
In a linear settlement pattern, the buildings are arranged in lines. These lines often follow the route of a road or body of water.

Question 1.
The percentage of people in a given population who can read and write a language refer to ______
(a) Infant mortality
(b) Literacy rate
(c) Sex ratio
(d) Populationdensity
Answer:
(b) Literacyrate

Question 3.
At the Confluence of river this pattern is developed ________
(a) Starlike
(b) Triangular
(c) Nebular
(d) Circular
Answer:
(b) Triangular

Consider the given statement and choose the right option given below.

III. Answer the following in brief

Question 1.
Classify the Environment.
Answer:
Environment can be classified as

Question 2.
What is demography?
Answer:

Question 5.
Why do we observe the The World Population Day?
Answer:

Question 6.
Mention about the official population policy implemented in 1952.
Answer:

Question 9.
What is forest management?
Answer:

Question 14.
What is Smog?
Answer:

Question 16.
Why is Sustainability important?
Answer:

V. Give reasons for the following

VI. Answer in a paragraph. 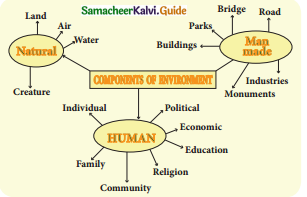 (a) Natural Environment : Natural components of environment such as Lithosphere, atmosphere, hydrosphere and biosphere.

(b) Human Environment : This is the interaction between man as an individual, with his family, occupation and society. It is also related to various cultural aspects such as education, religion, economics and politics.

(b) Areas of moderate density (10 to 50 people per sq.km) – The sub tropical regions like Angola, Congo, Nigeria and Zambia in Africa.

Question 3.
What is ‘Migration’? and explain its types.
Answer:

(a) Internal Migration – The movement of people.within a country i.e. between states, districts, villages, etc is called as Internal migration.

Question 4.
What are Urban Settlements? apd explain its types.
Answer:

(a) Town : A town is generally larger than a village, but smaller than a city. It has a population of less than 1 lakh. E.g.: Arakkonam.

(b) City : Cities are much larger than towns and have a greater number of economic
functions. The population in cities are estimated to be more than 1 lakh. E.g.: Coimbatore

(e) Conurbation : A conurbation is a region comprising of a number of cities, large towns and other urban areas. E.g.: Delhi

Question 5.
What are the effects of Deforestation?
Answer:

Question 6.
How can we conserve forests?
Answer:

Question 10.
How to dispose a Waste?
Answers:

(a) Wet Waste: It comes from the kitchen/cooking/food, etc.

(b) Dry Recyclable Waste : Such as newspapers, cardboard, packing plastics, bottles, cans, etc., should go to a different bin.

(c) Rejected Waste: which does not belong to the above two categories, including bio waste like diapers and bandages, etc.

(d) Sewage: sewage slude is produced by waste water treatment processes. Due to rapid urbanization, there has been an increase in municipal waste water.

Question 11.
Explain the term sustainable development. Why should we balance the economic, social and environmental factors of sustainability in equal harmony?
Answer: 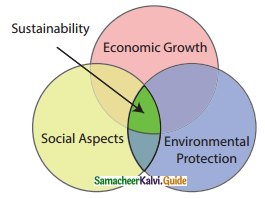