Question 6.
A: Heterotrophs do not produce their own food.
R : They depend on autotrophs for their nourishment.
Answer:
(a) Both assertion (A) and reason(R) are true; R explains A

Question 7.
A : Hotspots are the regions characterised by numerous endemic plants and animal species
living in a vulnerable environment.
R : To manage and focus on conservation work more effectively, researchers identified hotspots.
Answer:
(a) Both assertion (A) and reason(R) are true; R explains A

Question 8.
A: The number of gorillas in Africa has plummeted by 60% in the past twenty years.
R : Non intervention of human beings in the forest areas.
Answer:
(c) A is true; R is false

III. Answer the following in brief

Question 1.
What is Biosphere?
Answer:
The biosphere is a life-supporting layer that exists on the earth’s surface. This layer on earth encompasses the Lithosphere, Hydrosphere, and Atmosphere. It includes flora and fauna that thrive on or near the earth’s surface.

Question 2.
What is an ecosystem?
Answer:

Question 3.
What does the term ‘biodiversity’’ mean?
Answer:
Biodiversity or biological diversity refers to a wide variety of living organisms (plants, animals and other microorganisms) which live in a habitat. It is highly influenced by topography, climate as well as human activities.

Question 4.
What is meant by loss of bio diversity?
Answer:

IV. Give reasons for the following

Question 1.
Producers are also called autotrophs.
Answer:
Producers are self-nourishing components of the ecosystem. Hence they are called Autotrophs. They are found both on land and water, e.g. Plants, Algae, Bacteria, etc.

V. Distinguish between the following.

VI. Answer the following in a paragraph

Question 1.
Explain the various components of the ecosystem.
Answer:
An ecosystem is a community, where all living organisms live and interact with one another and also with their non-living environment such as land, soil, air, water etc. Ecosystems range in size from the smallest units (e.g. bark of a tree) that can sustain life to the global ecosystem or ecosphere. (e.g. Cropland, Pond ecosystem, Forest ecosystem, Desert ecosystem etc.). Biosphere harbours all ecosystems on the earth and sustains life forms including mankind.
Components of the ecosystem:
An ecosystem consists of three basic components, namely
(A) Abiotic components
(B) Biotic components and
(C) Energy component

C) Energy Components: All organisms in the biosphere use energy to work and convert one form of energy into another. The Sun is the ultimate source of energy for the biosphere as a whole. The solar energy gets transformed into other forms of energy through the various components in the ecosystem. The producers, consumers and decomposers contribute a lot to the energy flow in an ecosystem.

Question 2.
Write a paragraph on the functions of an ecosystem.
Answer:

Question 3.
Explain about the aquatic biomes on Earth.
Answer:
An aquatic biome is a group of living organisms that live and interact with one another and its aquatic environment for nutrients and shelter. Like terrestrial biomes, aquatic biomes are influenced by a series of abiotic factors. It is broadly classified as freshwater biomes and marine biomes.

B. Marine Biomes: They are the largest aquatic biomes on earth. They are continuous bodies of saltwater and provide a wide range of habitats for marine plants and animals. Coral reefs are the second kind of marine biomes within the ocean. Estuaries, coastal areas where salt water and fresh water mix, form a third unique marine biome. As water provides maximum mobility to marine organisms, nutrients are circulated more quickly and efficiently here than the terrestrial biomes. Apart from animals, plants such as kelp, algae, phytoplankton etc. also grow in water. Aquatic biomes are not only important for plants and animals, but also for humans. Humans use aquatic biomes for water, food and leisure activities. Some of the threats and issues to aquatic biomes are overfishing, pollution and a rise in sea level.

VII. Find out the dates for the following

Question 1.
Locate the following on the world outline map. 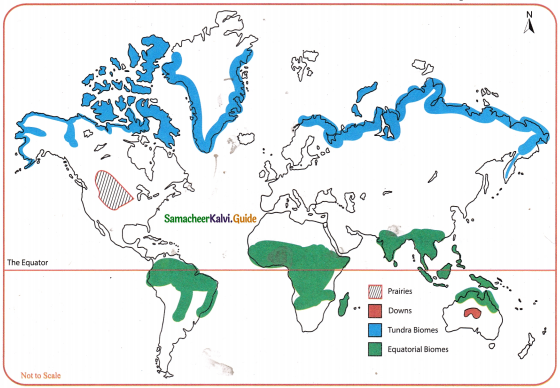 Question 1.
Narrate the given web of Arctic Thundra in your own words 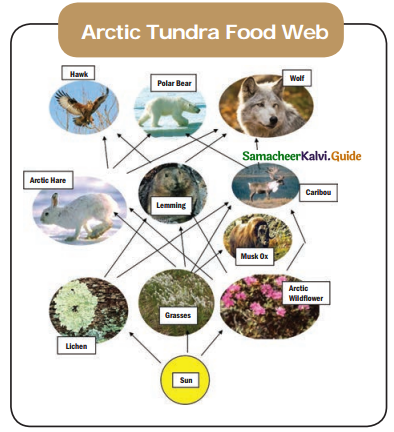 Question 1.
Narrate the forest ecosystem in your own words.
Answer:

I. Fill in the Blanks

Question 2.
The branch of science that deals with an ecosystem are called ________
(a) Etymology
(b) Geology
(c) Limnology
(d) Ecology
Answer:
(d) Ecology

Question 6.
Assertion (A): A stable biosphere has to be conserved.
Reason (R): The loss of biodiversity affects land, water, air etc.
Answer:
(a) Both assertion (A) and reason (R) are true; R explains A

Question 8.
Assertion (A): Biosphere Reserves are established in India.
Reason (R): Today’s loss of biodiversity is habitat alteration caused by human activities.
Answer:
(a) Both assertion (A) and reason(R) are true; R explains A

Question 2.
In India where do we find hot spots?
Answer:
Hotspots in India are the Himalayas, Western Ghats, Indo Burma Region and Sundaland.

Question 4.
What threat is posed by the savanna grasslands?
Answer:

Question 5.
What has been identified by the U.S. National Cancer Institute?
Answer:

Question 9.
What is a Biosphere Reserve?
Answer:
A Biosphere Reserve is a special ecosystem or specialised environment with flora and fauna that require protection and nurturing. There are 18 Bioshpere Reserves in India.

Question 10.
Explain the following terms
(a) Herbivorous
(b) Carnivorus
(c) Ommivorous
(d) Scavengers
Answer:
(a) Herbivorous: A herbivores is an animal that gets its energy from eating plants and only plants. Many herbivores have special digestive systems that let them digest all kinds of plants including grasses. Eg.-, deer, rabbits, cows, sheep, goats, elephants, giraffes, horses and pandas.

(b) Carnivores: A Carnivore is an animal that gets food from killing and eating other animals. Or they scavenge their dead flesh. Eg., Hyenas, Wolves, Mountains lions, Polar Bears.

(c) Omnivores: An omnivore is a kind of animal that eats either other animals or plants Eg. Raccoons, pigs, rats, chickens, crows etc.

VI. Give reasons for the following

(b) Loss of biodiversity: