Question 1.
A system of government in which one person reigns supreme, usually a king or queen, is called __________
(a) autocracy
(b) monarchy
(c) democracy
(d) republic
Answer:
(b) monarchy

Question 8.
From which language was the term “Democracy” derived?
(a) Greek
(b) Latin
(c) Persian
(d) Arabic
Answer:
(a) Greek

Question 9.
In democracy the final authority’ rests with __________
(a) The Parliament
(b) The People
(c) The council of Ministers
(d) The President
Answer:
(b) The People

Question 10.
Which one of the country has the Presidential form of government
(a) India
(b) Britain
(c) Canada
(d) the USA
Answer:
(d) the USA

Question 1.
What are the challenges to Indian democracy? Explain.
Answer:
Democracy is the dominant form of government in the contemporary world. It has not faced a serious challenge or a rival so far. In the last hundred years, there has been an expansion of democracy all over the world. The various aspects of democracy and its challenges are:

Question 3.
What is your opinion about democracy in India?
Answer:
India has a parliamentary form of democracy. The Indian Parliament comprises the elected representatives of the people and makes the laws for the Country. The participation of people in the decision making and the consent of citizens are the two important elements of the parliamentary form of government in India.

India is the largest democratic country in the world. Democracy in India works on five basic principles. These are sovereign, socialist, secular, democratic, republic.

Every person who is a citizen of India and who is not less than 18 years of age can exercise their right to vote in India, based on universal adult suffrage. There is no discrimination based on a person’s caste, creed, religion, region, gender, and education when it comes to providing the right to vote.

Question 1.
Discuss in the class what is universal adult franchise? Why is it important?
Answer:

Question 2.
“Democracy is the power of the majority which respects minority.” Discuss.
Answer:

Question 3.
Conduct a mock election in your class.
Answer:
Activity to be done by the students themselves

Question 4.
A group discussion on the merits and demerits of democracy of India in the classroom.

Question 1.
Will you have the right to equality under a dictatorship? What would be the attitude regarding public opinion in such a country?
Answer:

No; well, a dictatorship is when a country is run by a minority of people and the citizens of that country don’t have a choice of who runs it. If one person has to make all the decisions for a country, they might use their power badly because they have too much responsibility.

Question 2.
How does democracy lead to a peaceful and harmonious life among the citizens? Explain
Answer:

Select a group of countries. Research each country and tell what type of government it has: Aristocracy, Monarchy, Autocracy, Oligarchy, Theocracy, Democracy, Republic. Then, provide characteristics of this country that helped you determine the type of government.
Answer: 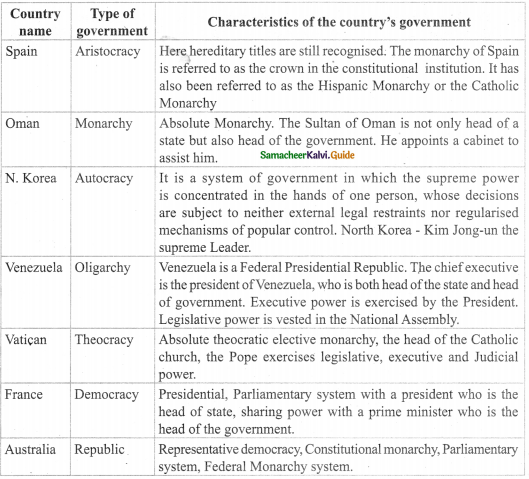 Question 1.
A system of government in which power is held by the nobility is called
(a) Monarchy
(b) Oligarchy
(c) Aristocracy
(d) Theocracy
Answer:
(c) Aristocracy

Question 2.
We find a system of government in which priests rule in the name of God or himself as a God in
(a) North Korea
(b) Vatican
(c) India
(d) Saudi Arabia
Answer:
(b) Vatican

Question 3.
“True Democracy cannot be worked by twenty men sitting at the centre. It has to be worked from below by the people of every village” – This statement was stated by
(a) Prof. Seeley
(b) Lowell
(c) Mahatma
(d) Dicey
Answer:
(c) Mahatma

Question 5.
Freedom to practice any religion or reject all is expressed by the term
(a) Secular
(b) Socialist
(c) Republic
(d) Sovereign
Answer:
(a) Secular

Question 1.
What is government?
Answer:

Question 2.
What is meant by the Parliamentary form of Government?
Answer:

Question 3.
What is democracy?
Answer:

Question 6.
When were the first General elections held in Independent India?
Answer:

Question 2.
Conduct a study on General elections in India
Answer: