I. Choose the correct answer :

Question 1.
Which of the following is not a salivary gland?
(a) Sublingual
(b) Lachrymal
(c) Submaxillary
(d) Parotid
Answer:
(b) Lachrymal

Question 3.
To prevent the entry of food into the trachea, the opening is guarded by ………………..
(a) epiglottis
(b) glottis
(c) hard palate
(d) soft palate
Answer:
(a) epiglottis

Question 6.
Which one of the following substance is not a constituent of sweat?
(a) Urea
(b) Protein
(c) Water
(d) Salt
Answer:
(b) Protein

Question 8.
Which of the following is not a part of female reproductive system?
(a) Ovary
(b) Uterus
(c) Testes
(d) Fallopian tube
Answer:
(c) Testes

II. Fill in the blanks :

1. The opening of the stomach into the intestine is called …………………
Answer:
pylorus

2. The muscular and sensory organ which helps in mixing the food with saliva is ………………..
Answer:
tongue

III. State whether true or false. If false, correct the statement.

2. During digestion, proteins are broken down into amino acids.
Answer:
True.

a. Excretion and Secretion
b. Absorption and Assimilation
c. Ingestion and Egestion
d. Diphyodont and Heterodont
e. Incisors and Canines
Answer:
(a) Excretion
The process of removal of nitrogenous wastes generated in the body is called excretion.

Secretion
A process by which substances are produced and discharged from a cell, gland or organ for a function in the organism or for excretion.

(c) Ingestion
The process of nutrition begins with intake of food, called ingestion.

(d) Diphyodont
In human beings two sets of teeth (Diphyodont) are developed in their life time. The first appearing set of 20 teeth ca! led temporary or milk teeth are replaced by the second set of thirty two permanent teeth, sixteen in each jaw. This is called Diphyodont dentition.

Heterodont
Permanent teeth are of four types according to their struture and function namely Incisors, Canines, Premolars and molars. This is called Heterodont dentition.

Question 2.
Why do we sweat?
Answer:
The human body functions normally at a temperature of about 37°C. When it gets hot sweat glands start secreting sweat, which contains water with small amounts of other chemicals like ammonia, urea, lactic acid and salts (mainly sodium chloride). The sweat passes through the pores in the skin and gets evaporated, which reduces the body temperature.

Question 4.
What is micturition?
Answer:
When the urinary bladder is full the urine is expelled out through the urethra. This process is called micturition. A healthy person excretes one to two litres of urine per day.

Question 5.
Name the types of teeth present in an adult human being. Mention the functions of each.
Answer:
Permanent teeth are of four types (Heterodont), according to their structure and function namely incisors, canines, premolars, and molars.

Types of teeth and their functions : 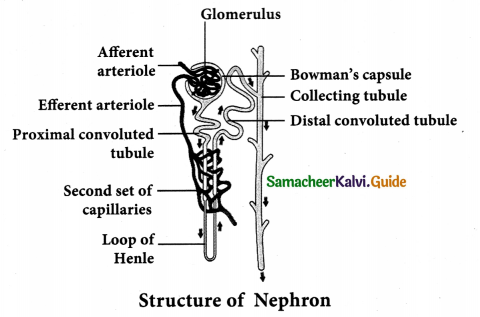 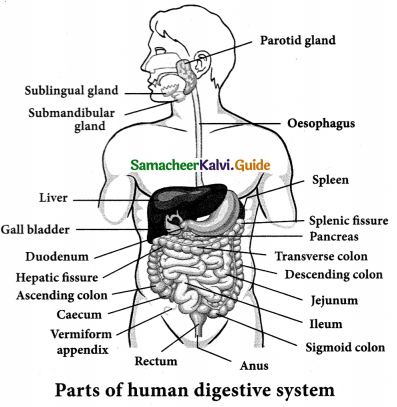 Mouth: Leads into the buccal cavity. It is bound 2 soft movable upper and lower lips. The buccal cavity is a large space-bound above by the palate (which separates the windpipe and food tube), below by the throat and on the sides by the jaws. The jaws bear teeth.

Teeth: Hard structures meant
for holding, cutting, grinding and crushing the food. In human beings, two sets of teeth (Diphyodont) are developed in their lifetime.

Each tooth has a root fitted in the gum (Theocodont). Permanent teeth are of four types (Heterodont), according to their structure and function namely incisors, canines, premolars and molars.

Salivary glands: There are 3 pairs

Tongue: Muscular, sensory organ – Helps in mixing the food with the saliva.

Pharynx: It is a membrane-lined cavity behind the nose and mouth, connecting them to the oesophagus. Serves as” a pathway for the movement of food from mouth to oesophagus.

Oesophagus: Muscular-membranous canal about 22 cm in length. It conducts food ‘ from pharynx to the stomach by peristalsis (wave-like movement) produced by the rhythmic contraction and relaxation of the muscular walls of alimentary canal.

Location: Between oesophagus and the small intestine.

Small intestine: The small intestine is the longest part of the alimentary canal, which is a long coiled tube measuring about 5 – 7 m. It comprises three parts- duodenum, jejunum, and ileum.

Liver: Largest digestive gland of the body, reddish-brown in colour. Bile salts help in the digestion of fats by emulsification (conversion of large fat droplets into small ones).

Pancreas: Lobed, a leaf-shaped gland situated between the stomach and duodenum.
Pancreas acts both as an exocrine gland and as an endocrine gland.

Large intestine: The unabsorbed and undigested food is passed into the large intestine.
It extends from the ileum to the anus. About 1.5 meters in length. Has 3 parts colon and rectum.

Caecum: Small blind pouch-like structure at the junction of the small and large intestine.
From its blind end, a finger-like structure called a vermiform appendix arises. It is a vestigeal (functionless) organ in human beings.

Colon: Much broader than ileum. Passes up the abdomen on the right ascending colon,
crosses to the left just below the stomach (transverse colon) and down on the left side – (descending colon).

Question 2.
Explain the structure of the kidney and the steps involved in the formation of urine.
Answer:
STRUCTURE OF KIDNEYS:

There are three stages.

Tubular reabsorption: The filtrate in the proximal tubule consists of essential substances such as glucose, amino acids, vitamins sodium-potassium bicarbonates, and water that are reabsorbed into the blood by a process of selective reabsorption

Tubular secretion: Substances such as EU or ions are secreted into the tubule. This tubular filtrate is finally known as urine , which is hypertonic in man Finally the urine passes into collecting ducts to the pelvis and through the ureter into the urinary bladder. When the urinary bladder is full the urine is expelled out through the urethra. This process is called micturition. The healthy person excretes 1-2 litres of urine/day.

Question 1.
Assertion: Urea is excreted out through the kidneys.
Reason: Urea is a toxic substance.
Answer:
(a) Both Assertion and Reason are true and Reason is the correct explanation of Assertion

Question 2.
Assertion: In both the sexes gonads perform dual function.
Reason: Gonads are also called primary sex organs.
Answer:
(a) Both Assertion and Reason are true and Reason is the correct explanation of Assertion

Question 3.
Why do you think that urine analysis is an important part of medical diagnosis?
Answer:
Urine is excreted from the human body which constitutes more than 95% water and other constituents like urea, chloride, sodium, potassium, creatinine and other dissolved ions, and inorganic and organic compounds. When there is an illness or disease, the constituents and its levels in urine also change.

Therefore urinalysis is also an important diagnostic tool which may be used to screen for and/or help diagnose conditions such as urinary tract infections, kidney disorders, liver problems, diabetes, or other metabolic conditions.

Question 4.
Why does your doctor advise you to drink plenty of water?
Answer:
Drinking water helps

Question 5.
Can you guess why there are sweat glands on the palm of our hands and the soles of our feet?
Answer:
Sweating is important for thermal regulation. Sweat works as a defense against microbes to which our hands and feet are mostly exposed than the other parts of our body.

X. Match the parts of the given figure with the correct option:

Look at the picture given below and answer the questions that follow :

1. Are the teeth of animals similar to ours?
2. How is the shape of their teeth related to their food habit?
Answer:
There are many differences between human teeth and animal teeth.

Lion Teeth: They are
Carnivore Teeth: Teeth are very sharp and scissor-like. Their front teeth are used to bite and hold onto prey while their long canine teeth are used for tearing flesh and meat. Their molars are also sharp – and used for slicing rather than chewing because they mainly swallow their food in whole chunks.

Bison or buffalo teeth: They are
Herbivore teeth: An herbivore is an animal that gets energy from eating plants. Herbivores have more molars than we do. They use these flat teeth for grinding branches, grasses, and seeds. Since their food doesn’t try to escape, they use their front teeth like pruning shears to clip leaves and stems.

I. Choose the correct answers :

Question 10.
Which is a pear-shaped muscular organ in females?
(a) Uterus
(b) Fallopian tubes
(c) Ovaries
(d) Vagina
Answer:
(a) Uterus

Question 11.
What is the other name of fallopian tubes?
(a) Ovaries
(b) Fimbriae
(c) Oviducts
(d) Ova
Answer:
(c) Oviducts

II. Fill in the blanks :

3. The oviducts are also known as ………………
Answer:
fallopian tubes

6. Organs which are concerned with the formation, storage and elimination of urine constitute the ………………
Answer:
excretory system

7. In the process of urine formation, the maximum amount of water from the glomerular filtrate is reabsorbed in the ………………
Answer:
proximal convoluted tubule

12. The process of formation of sperms is known as ………………
Answer:
spermatogenesis

13. ……………… is the vestigeal organ in human.
Answer:
Vermiform appendix

IV. Answer the following in one or two sentences :

1. It conducts food from pharynx to stomach by peristalsis.
Answer:
Oesophagus.

3. The bunch of capillaries inside the Bowman’s capsule.
Answer:
Glomerulus.

Question 1.
Name the salivary glands.
Answer:
3 pairs of salivary glands are present in the mouth cavity.
They are Parotid glands, sublingual glands, and submaxillary or submandibular glands.

Question 2.
What is chyme?
Answer:
The action of the gastric juice SSid churning of food in the stomach converts the bolus into a semi-digested food called chyme.

Question 3.
What are villi?
Answer:
Ileum is the longest part of the small intestine. It contains minute finger-like projections called villi. They help in the absorption of food.

Question 6.
What is heparin?
Answer:
It is an anticoagulant produced by the liver.

Question 9.
What is a vermiform appendix?
Answer:
It is a finger-like structure originating from the blind end of the caecum, is the alimentary canal of man. It is a vestigial organ (functionless organ).

Question 10.
What is the contribution of Joseph E. Murray in Nephrology?
Answer:
He performed the first successful kidney transplant operation.

Question 11.
What is parturition?
Answer:
Childbirth is called parturition. 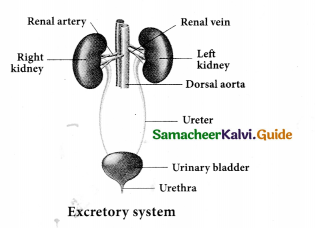 Question 4.
What are the functions of the ovaries and uterus in the female reproductive system?
Answer:
Functions of ovaries :

Functions of the uterus :

Question 6.
What is homeostasis?
Answer:
The tendency of the body to seek and maintain a balance condition or equilibrium within its internal environment, even when faced with external challenges is called homeostasis.

Question 8.
Select the substances given below that need to be excreted from the body, (urea, amino acids, carbon dioxide, uric acid, glucose)
Answer:
Urea and carbon dioxide

Question 9.
Rearrange the jumbled words and fill in the blanks in the following passage to make it a meaningful description.
The human urinary system consists of a pair of …….. ( nyedik), which form the urine; a pair of …….. (ertreu), which conduct the …….. (neuri) from kidneys to the …….. (naryuri drebdal) for storage of urine and a …….. (reuhrat) through which the urine is voided by bladder contractions.
Answer:
1. Kidney
2. Ureter
3. Urine
4. Urinary bladder
5. Urethra

Question 2.
Draw a chart to show the various enzymes produced during digestion in our body and their action.
Answer: 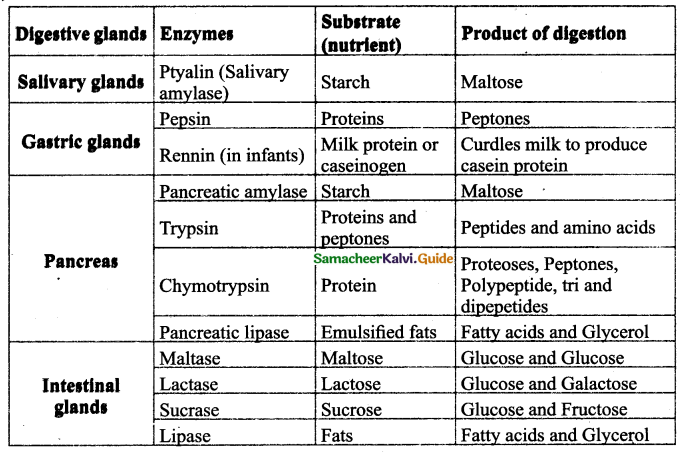 Question 3.
Write a note on teeth of humans.
Answer:

Question 4.
Write a note on functions of liver in digestion.
Answer:

Question 5.
Write a note on the skin.
Answer:

Question 2.
Skin is considered to be an excretory organ – Justify.
Answer:
Skin eliminates