A. Identify the character or speaker of the following lines.

Question 1.
They gathered the tressure
Answer:
The honest couple

Question 2.
The pine tree under which, I am hurried, to be cut down and made int a mortar
Answer:
The (dead) dog

Question 3.
They dug and found nothing but a quantity of dirty and nasty offal
Answer:
The wicked couple

Question 4.
He had not to wait long before he was called into the prince’s palace and ordered to exhibit his power
Answer:
The wicked old man

B. Based on your understanding of the story choose the right answers from the given options.

C. Answer the following questions in a paragraph of about 80 to 100 words.

Question 1.
The old farmer was a kind person. Justify the statement with suitable examples from the story.
Answer:
The old farmer was a kind man. He helped the poor and the needy with what he had. He had a pet dog, which they used to feed with fish and tit-bit from their kitchen. One day, when their dog helped them in getting wealth, they did not take it all for themselves.

But gave alms to the poor and then bought for themselves rice fields and corn-fields. When his neighbour killed his dog, he did not scold him. He just wept for his pet, kept some food, burnt incense, and adorned its grave with flowers. He also showed his kindness to his envious neighbours, as they were distressed, by giving them a share of his own riches.

Question 2.
How did the dog help the farmer even after its death?
Answer:
The good oldman’s neighbour killed the dog and buried it under the roots of pine-tree. The oldman adorned its grave with flowers and shed tears over his lost pet.

That night the dog appeared to him. It asked him to make a mortar from the pine tree wood and use it. When he ground his rice, it turned into rich treasure. The neighbour borrowed the mortar. They tried to use it but all their rice turned into filth. So they broke the mortar and burnt it.

One night dog appeared to the good old man and told him that if he took the ashes and sprinkle them on whithered trees, the trees would revive and blossom.

He verified the power to bring back dead trees to life. A certain prince sent for him, he sprinkled the ashes on the poumpland cherry trees. The trees shoot out and Put forth flowers. So the prince gave him a rich reward and sent him rejoicing. Thus the dog helped the good oldman even after its death.

Question 3.
Why did the Prince reward the farmer but punish the neighbour for the same act?
Answer:
The prince rewarded the farmer because he made all the withered plum and cherry trees in the palace to shoot out and put forth flowers. So the prince was happy with his magical powers and sent him home rejoicing with plenty of presents.

Whereas the neighbour of the good old man was punished because he couldn’t perform the act of reviving the trees, after scattering the ashes on them. The ashes flew into the prince’s eyes and mouth, blinding and choking him. So the guards caught him and beat him almost to death.

Question 4.
Bring out the difference between two neighbours with suitable examples to support your view.
Answer:
The two neighbours in the story are of opposite characters. One old man was honest and kind. The other old man was cruel and wicked. He borrowed the dog to use it and become rich. But it did not come true. So he killed it and burnt it. The dog’s ashes had the power to revive dead trees. The cruel old man wanted to use it to become rich.

But he failed and he was beaten almost to death by the Prince’s retainers. They are similar to the two women who came to King Solomon’s court. Both the women claimed to be the mother of a living child. The king ordered the servant to cut it into two with a sword.

The false mother opted to take one half of the baby. But the true mother requested the king not to cut and kill the baby. She asked the king to give the baby to the other woman. The king caught the wicked woman. The child was restored to the real mother. The wicked woman was punished by the king.

D. Refer to what happens in the folktale and complete the story with the help of the hints given in the mind map. 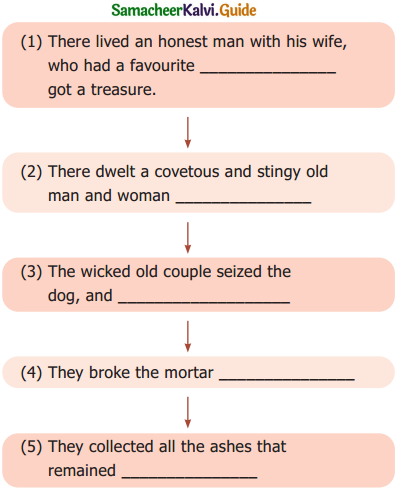