A. Choose the correct answer

Question 5.
A narrow strip of water that connects two large water bodies?
(a) A Strait
(b) An Isthmus
(c) An Island
(d) A Trench
Answer:

B. Fill in the blanks

C. Circle the odd one out

E. (i) Consider the following statements

F. Answer in a word

Question 1.
Which is the highest plateau in the world?
Answer:
Tibetan Plateau.

Question 3.
Which ocean is named after a country?
Answer:
Indian Ocean.

Question 5.
What is the deepest part of the ocean called?
Answer:
Trench

Question 1.
What is a continent?
Answer:
The vast landmasses on Earth are called Continents.

Question 2.
Name the continents which surround the Atlantic Ocean.
Answer:
The Atlantic ocean is bounded by North America and South America in the West, and ( Europe and Africa in the East)

Question 3.
What are the oceans?
Answer:
Oceans are a vast expanse of water.

Question 4.
List out the names of continents according to their size
Answer:
From the largest to the smallest, they are Asia, Africa, North America, South America,  Antarctica, Europe, and Australia.

Question 1.
A Mountain and a Plateau?
Answer:
Mountains

Question 2.
An ocean and a sea
Answer:

I. Answer the following questions in detail

Question 4.
Give the important features of the Pacific Ocean,
Answer:

Question 5.
Write above the importance of oceans.
Answer:

Question 2.
What order of a landform is this?
Answer:
Third-order landform

Question 3.
By which activity of river is this landform formed?
Answer:
Deposition 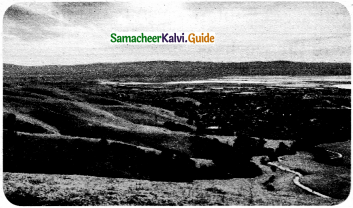 K. (i) Activity (Activity to be done by students)

Trip to the nearby area to appreciate the physical features of any kind of landform.
Conduct a quiz on landforms and oceans.

Question 1.
Give examples for the following using an Atlas.
Answer:

Question 2.
Map reading (with the help of an atlas)
Answer:

Question 1.
What is an Isthmus?
Answer:
A narrow strip of land which connects two large landmasses or separates two large water bodies is called an Isthmus.

Question 3.
Bring out the importance of mountains.
Answer:

Question 5.
Write a few lines about The Indian Ocean.
Answer: 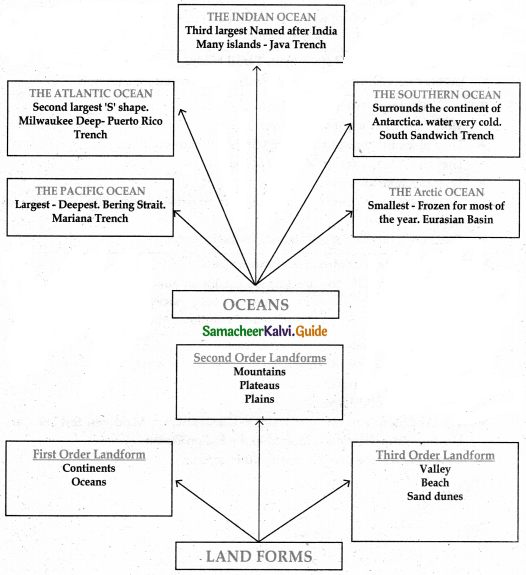