Question 1.
Trade between two countries is known as ………………… trade.
a) External
b) Internal
c) Inter-regional
d) Home
Answer:
a) External

Question 3.
International trade differs from domestic trade because of
a) Trade restrictions
b) Immobility of factors
c) Different government polices
d) All the Above
Answer:
d) All the Above

Question 9.
Who among the following enunciated the concept of single factoral terms of trade? .
a) Jacob Viner
b) G.S.Donens
c) Taussig
d) J.S.Mill
Answer:
a) Jacob Viner

Question 11.
Favirnrable trade means value of exports are ………………… than that of imports.
a) More
b) Less
c) More or Less
d) Not more than
Answer:
a) More

Question 20.
Benefits of FDI include, theoretically
a) Boost in Economic Growth
b) Increase in the import and export of goods and services
c) Increased employment and skill levels
d) All of these
Answer:
d) All of these

Question 21.
What is International Economics?
Answer:

Question 22.
Define international trade.
Answer:
It refers to the trade or exchange of goods and services between two or more countries.

Question 24.
What is the main difference between Adam Smith and Ricardo with regard to the emergence of foreign trade?
Answer:
According to Adam Smith, the basis of international trade was absolute cost advantage whereas Ricardo demonstrates the comparative cost Advantage.

Question 26.
What do you mean by balance of payments?
Answer:
BOP is a systematic record of a country’s economic and financial transactions with the rest of the world over a period of time.

Question 27.
What is meant by Exchange Rate?
Answer:
Meaning of Foreign Exchange (FOREX):

1. FOREX refers to foreign currencies. The mechanism through which payments are effected between two countries having different currency systems is called the FOREX system. It covers methods of payment, rules and regulations of payment and the institutions facilitating such payments.

2. “FOREX is the system or process of converting one national currency into another, and of transferring money from one country to another”.

Question 32.
What are import quotas?
Answer:
Import Control: Imports may be controlled by

In the above example, even though India has more capital in absolute terms, America is more richly endowed with capital because the ratio of capital in India is 0.8 which is less than that in America where it is 1.25. The following diagram illustrate the pattern of World Trade.

Question 38.
Explain the types of Terms of Trade given by Viner.
Answer:
Terms of Trade related to the Interchange between Productive Resources:

1. The Single Factorial Terms of Trade:
Viner has devised another concept called “the single factor terms of trade” as an improvement upon the commodity terms of trade. It represents the ratio of the export price index to the import-price index adjusted for changes in the productivity of a country’s factors in the production of exports. Symbolically, it can be stated as
Tf = (Px / Pm ) Fx
Where Tf stands for single factorial terms of trade index. Fx stands for productivity in exports (which is measured as the index of cost in terms of quantity of factors of production used per unit of export).

2. Double Factorial Terms of Trade:
Viner constructed another index called “Double factorial terms of Trade”. It is expressed as
Tff = (Px / Pm )(Fx / Fm)
which takes into account the productivity in the country’s exports, as well as the productivity of foreign factors.
Here, Fm represents the import index (which is measured as the index of cost in terms of quantity of factors of production employed per unit of imports).

The official Reserve Assets Account:
Official reserve transactions consist of movements of international reserves by governments and official agencies to accommodate imbalances arising from the current and capital accounts.
The official reserve assets of a country include its gold stock, holdings of its convertible foreign currencies and Special Drawing Rights and its net position in the International Monetary Fund.

1. Cyclical Disequilibrium:
Cyclical disequilibrium occurs because of two reasons. First, two countries may be passing through different phases of business cycle. Secondly, the elasticities of demand may differ between countries.

2. Secular Disequilibrium:
The secular or long-run disequilibrium in BOP occurs because of long-run and deep-seated changes in an economy as it advances from one stage of growth to another. In the initial stages of development, domestic investment exceeds domestic savings and imports exceed exports, as it happens in India since 1951. 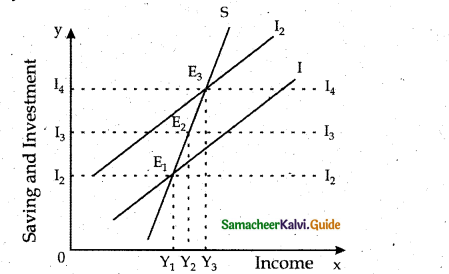 Question 11.
……………………….. items means the imports and exports of services and other foreign transfer transactions.
(a) Invisible
(b) Visible
(c) Exports
(d) Imports
Answer:
(a) Invisible

VII. Pick the odd one out:

VIII. Analyse the Reason:
Question 1.
Assertion (A): Foreign investment mostly takes the form of direct investment,
Reason (R): FDI may help to increase the investment level and thereby the income and employment in the host country.
Answer:
b) Assertion (A) and Reason (R) both are true, but (R) is not the correct explanation of (A).

Question 2.
Assertion (A) : Terms of trade refers to the ratio of export prices to import prices.
Reason (R) : The gains from international trade depend upon the terms of trade.
Answer:
a) Assertion (A) and Reason (R) both are true and (R) is the correct explanation of (A)

Question 3.
What is meant by Internal trade?
Answer:
Internal Trade refers to the exchange of goods and services within the political and geographical boundaries of a nation.

Question 4.
State Adam smith’s theory of Absolute cost Advantage.
Answer:
Adam smith stated that all nations can be benefited when there is free trade and specialisation in terms of their absolute cost advantage.

Question 6.
Give note on Income Terms of Trade.
Answer:
Income terms of trade is the net barter terms of trade of a country multiplied by its exports volume index.

Question 9.
Define Equilibrium Exchange Rate.
Answer:
The equilibrium exchange rate is that rate, which over a certain period of time, keeps the balance of payments in equilibrium.
X. 3 Mark Questions

Question 1.
What are the factors determining Exchange Rate?
Answer:

Question 3.
Name the Industrial sectors of India where FDI is not permitted.
Answer: 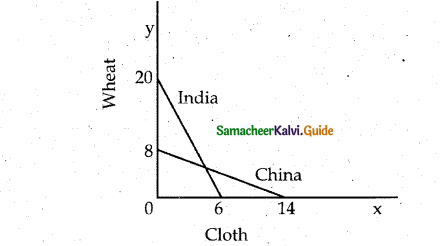 II. Equalization of Prices between Countries:
International trade may help to equalize prices in all the trading countries.

III. Equitable Distribution of Scarce Materials:
International trade may help the trading countries to have equitable distribution of scarce resources.