“Every member of a parent population has had equal chances of being included “Dr. Yates.

“A random sample is a sample selected in such a way that every item in the population has an equal chance of being included”-Harver.

Question 3.
Explain the procedures of testing of hypothesis
Solution:
The following are the steps involved in hypothesis testing problems:
1. Null hypothesis: Set up the null hypothesis H0

3. Level of significance: Choose the appropriate level of significant (a) depending on the reliability of the estimates and permissible risk. This is to be fixed before sample is drawn, i.e., a is fixed in advance.

5. Conclusion: We compare the computed value of Z in step 4 with the significant value or critical value or table value Zα at the given level of significance.
(i) If |Z | < Zα i.e., if the calculated value of is less than critical value we say it is not significant. This may due to fluctuations of sampling and sample data do not provide us sufficient evidence against the null hypothesis which may therefore be accepted.

(ii) If |Z |> Zα i.e., if the calculated value of Z is greater than critical value Zα then we say it is significant and the null hypothesis is rejected at level of significance α. 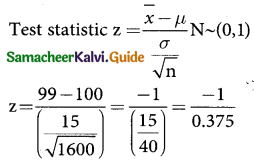