Question 3.
The load – elongation graph of three wires of the same material are shown in figure. Which of the following wire is the thickest? 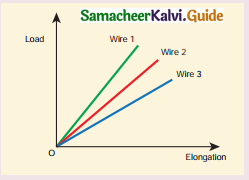 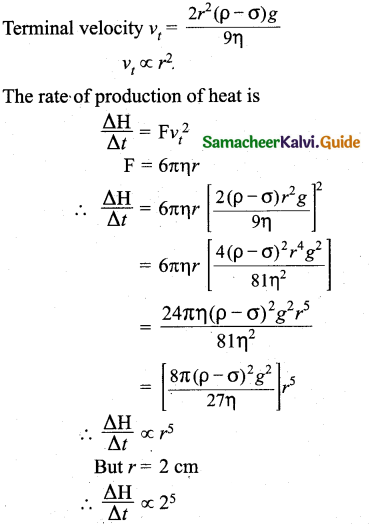 Question 6.
Two wires are made of the same material and have the same volume. The area of cross sections of the first and the second wires are A and 2A respectively. If the length of the first wire is increased by Δl on applying a force F, how much force is needed to stretch the second wire by the same amount? [NEET model 2018]
(a) 2
(b) 4
(c) 8
(d) 16
Answer:
(b) 4

Question 9.
Which of the following is not a scalar?
(a) viscosity
(b) surface tension
(c) pressure
(d) stress
Answer:
(d) stress

Question 10.
If the temperature of the wire is increased, then the Young’s modulus will:
(a) remain the same
(b) decrease
(c) increase rapidly
(d) increase by very a small amount
Answer:
(b) decrease 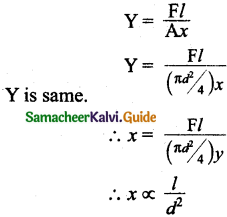 Hence the value of l must be most and that of d must be least. 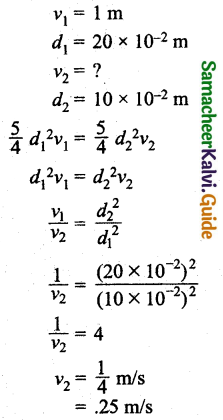 Strain: Strain is defined as the ratio of change in size to the original size of an object. It measures the degree of deformation.

Question 2.
State Hooke’s law of elasticity.
Answer:
It states that for small deformation, the stress is directly proportional to strain.

Question 4.
Explain elasticity using intermolecular forces.
Answer:
Elastic behaviour of solid. In a solid, atoms and molecules are arranged in such a way that each molecule is acted upon by the forces due to the neighbouring molecules. When deforming force is applied on a body so that its length increases, then the molecules of the body go far apart.

Question 6.
A spring balance shows wrong readings after using for a long time. Why?
Answer:
When a spring balance has been used for a long time, it develops elastic fatigue, the spring of such a balance takes a longer time to recover its original configuration and therefore it does not give correct measurement.

Question 9.
State Pascal’s law in fluids.
Answer:
If the pressure in a liquid is changed at a particular point, the change is transmitted to the entire liquid without being diminished in magnitude.

Question 10.
State Archimedes principle.
Answer:
When a body is partially or wholly immersed in a fluid, it experiences an upward thrust equal to the weight of the fluid displaced by it and its upthrust acts through the centre of gravity of the liquid displaced.
Upthrust or buoyant force = weight of liquid displaced.

Question 15.
What is Reynold’s number? Give its significance.
Answer:
Reynold’s number Rc is a critical variable, which decides whether the flow of a fluid through a cylindrical pipe is streamlined or turbulent.
Rc = \(\frac { ρVD }{ η }\)

Question 17.
Write down the expression for Stoke’s force and explain the symbols involved in it.
Answer:
F= 6πηrv

Question 18.
State Bernoulli’s theorem.
Answer:
According to Bernoulli’s theorem, the sum of’ pressure energy, kinetic energy, and potential energy per unit mass of an incompressible. Non-viscous fluid in a streamlined flow remains a constant.

Question 19.
What are the energies possessed by a liquid? Write down their equations.
Answer:
A liquid in a steady flow can possess three kinds of energy. They are
(i) Kinetic energy, KE = \(\frac { 1 }{ 2 }\)mv²
(ii) Potential energy, PE = mgh
(iii) Pressure energy, respectively Ep = PV

Question 24.
Distinguish between cohesive and adhesive forces.
Answer:
Cohesive – The force between the like molecules which holds the liquid together is called ‘cohesive force’.

Adhesive – When the liquid is in contact with a solid, the molecules of these solid and liquid will experience an attractive force which is called ‘adhesive force’.

Question 25.
What are the factors affecting the surface tension of a liquid?
Answer:

Question 26.
What happens to the pressure inside a soap bubble when air is blown into it?
Answer:
Pressure will slowly increase inside the soap bubble.

Question 29.
State the principle and usage of Venturimeter.
Answer:
This device is used to measure the rate of flow (or say flow speed) of the incompressible fluid flowing through a pipe. It works on the principle of Bernoulli’s theorem.

Question 1.
State Hooke’s law and verify it with the help of an experiment.
Answer:
Hooke’s law states that for a small deformation when the stress and strain are proportional to each other.

It can be verified in a simple way by stretching a thin straight wire (stretches like spring) of length L and uniform cross-sectional area A spring is suspended from a fixed point O. A pan and a pointer are attached at the free end of the wire as shown in Figure. 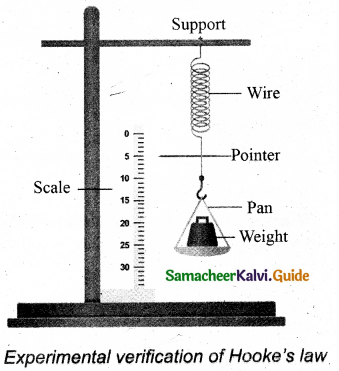 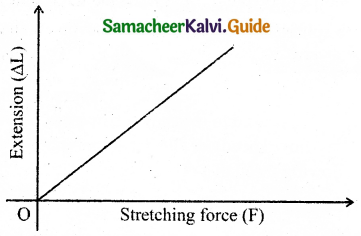 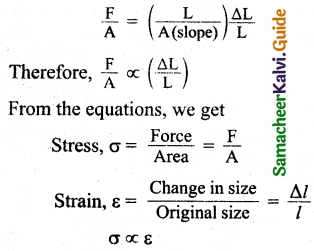 i.e., the stress is proportional to the strain in the elastic limit. 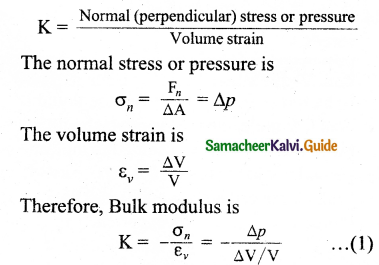 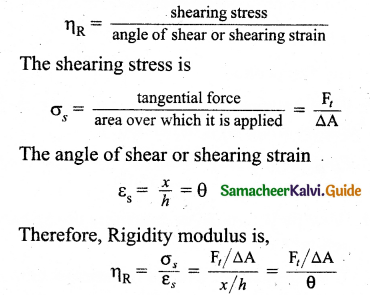 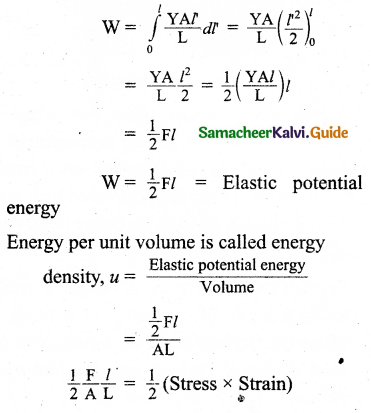 Question 4.
Derive an equation for the total pressure at a depth ‘h’ below the liquid surface.
Answer:
Let us consider a water sample of a cross-sectional area in the form of a cylinder. Let h1 and h2 be the depths from the air-water interface to level 1 and level 2 of the cylinder, respectively as shown in Figure (a). Let F1 be the force acting downwards on level 1 and F2 be the force acting upwards on level 2, such that, F1 = P1 A and F2 = P2 A Let the mass of the sample to be m and under equilibrium condition, the total upward force (F2) is balanced by the total downward force (F1 + mg), otherwise, the gravitational force will act downward which is being exactly balanced by the difference between the force F2 – F1
F2 – F1 = mg = FG … (1)
Where m is the mass of the water available in the sample element. Let p be the density of the water then, the mass of water available in the sample element is
m = ρV = ρA(h2 – h1])
V= A (h2 – h1) 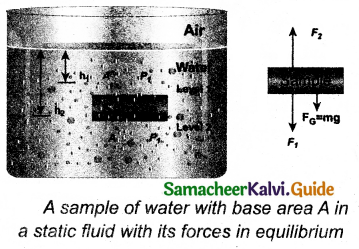 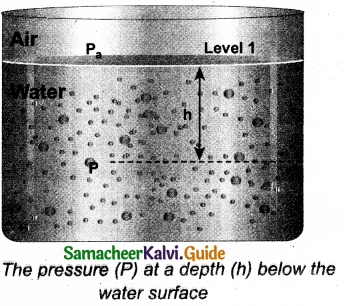 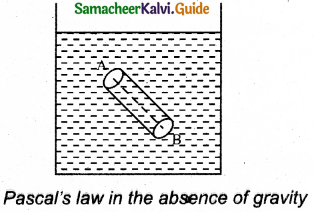 Pascal’s law states that if the effect of gravity can be neglected then the pressure in a fluid in equilibrium is the same everywhere. Let us consider any two points A and B inside the fluid imagined. A cylinder is such that points A and B lie at the centre of the circular surface at the top and bottom of the cylinder.

As the areas of these two faces are equal, the pressure at A = pressure at B. This is the proof of Pascal’s law when the effect of gravity is not taken into account. 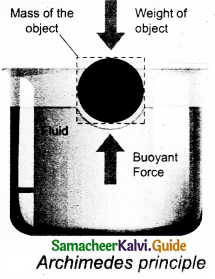 Archimedes principle states that when a body is partially or wholly immersed in a fluid, it experiences an upward thrust equal to the weight of the fluid displaced by it, and its upthrust acts through the centre of gravity of the liquid displaced.
Proof:
Consider a body of height h lying inside a liquid of density p, at a depth x below the free surface of the liquid. The area of a cross-section of the body is a. The forces on the sides of the body cancel out. 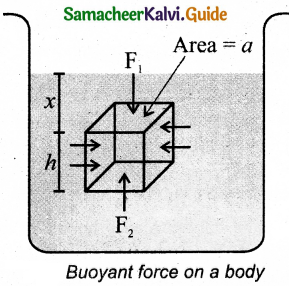 Question 7.
Derive the expression for the terminal velocity of a sphere moving in a high viscous fluid using stokes force.
Answer:
Let us consider a sphere of radius r which falls freely through a highly viscous liquid of coefficient of viscosity η. Let the density of the material of the sphere be p and the density of the fluid be c. 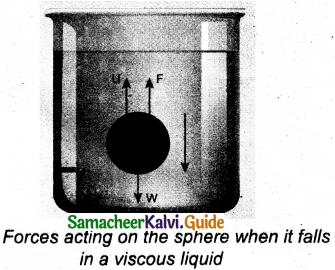 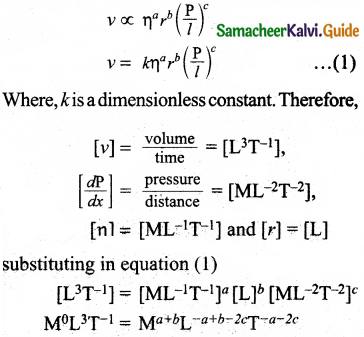 Question 9.
Obtain an expression for the excess of pressure inside a
(i) liquid drop
(ii) liquid bubble
(iii) air bubble.
Answer:
(i) Liquid drop: Let us consider a liquid drop of radius R and the surface tension of the liquid is T. 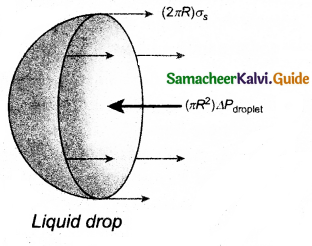 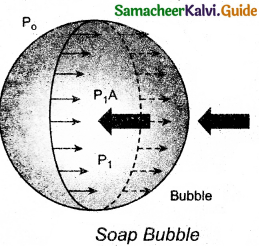 (a) Force due to surface tension
FT = 4πRT towards right

(b) Force due to outside pressure,
FP = P1πR² towards right 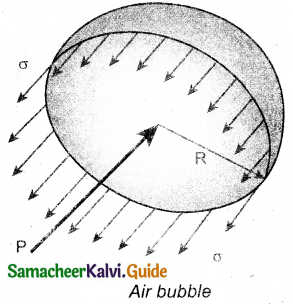 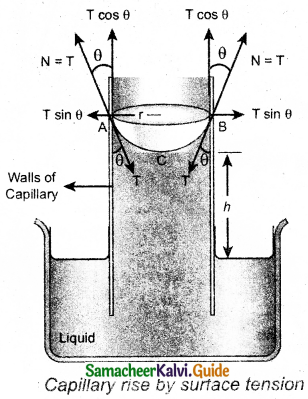 The surface tension force FT, acts along the tangent at the point of contact downwards and its reaction force upwards. Surface tension T is resolved into two components.
(i) Horizontal component T sinθ and
(ii) Vertical component T cosθ acting upwards, all along the whole circumference of the meniscus.
Total upward force = (T cosθ) (2πr)
= 2πrT. cosθ
Where θ is the angle of contact, r is the radius of the tube. Let ρ be the density of water and h be the height to which the liquid rises inside the tube. Then, 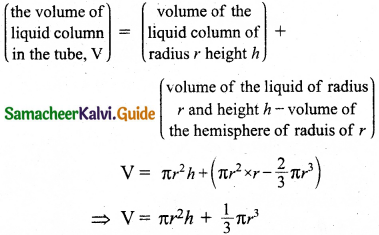 The upward force supports the weight of the liquid column above the free surface, therefore,

Question 11.
Obtain an equation of continuity for a flow of fluid on the basis of conservation of mass.
Answer:
Let us consider a pipe AB of varying cross-sectional areas a1 and a2 such that a1 > a2. A non – viscous and incompressible liquid flows steadily through the pipe, with velocities v1 and v2 in areas a1 and a2, respectively as shown in Figure. 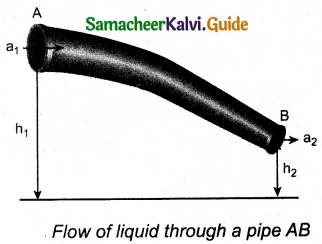 Question 13.
Describe the construction and working of venturimeter and obtain an equation for the volume of liquid flowing per second through a wider entry of the tube.
Answer:
Construction: It consists of two wider tubes A and A’ (with cross-sectional area A) connected by a narrow tube B (with the cross-sectional area a). A manometer in the form of a U-tube is also attached between the wide and narrow tubes as shown in Figure. The manometer contains a liquid of density ‘ρm‘. 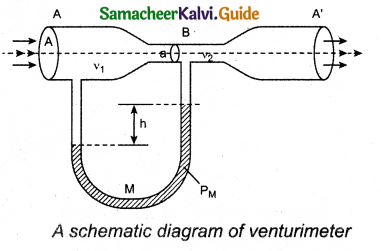 Theory:
Let P1 be the pressure of the fluid at the wider region of tube A. Let us assume that the fluid of density ‘ρ’ flows from the pipe with speed ‘v1’ and into the narrow region, its speed increases to ‘v1‘.

According to Bernoulli’s equation, this increase in speed is accompanied by a decrease in the fluid pressure P2 at the narrow region of the tube B. Hence, the pressure difference between tubes A and B is noted by measuring the height difference (∆P = P1 – P2) between the surfaces of the manometer liquid.
From the equation of continuity, we can say that Av1 = av2 which means that
v2 = \(\frac { A }{ a }\)v1
Using Bernoulli’s equation, 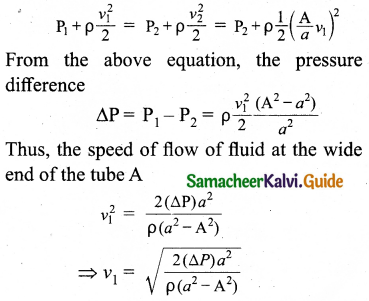 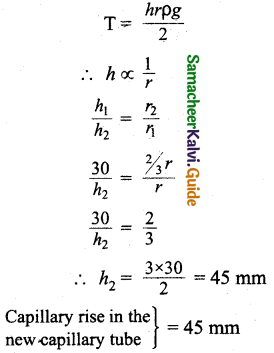 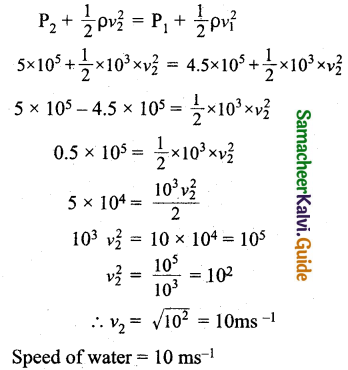 Question 1.
Why coffee runs up into a sugar lump (a small cube of sugar) when one corner of the sugar lump is held in the liquid?
Answer:
Dip the comer of a sugar cube in coffee, and get the whole cube coffee-flavoured due to “capillary action”.

Question 4.
Why the passengers are advised to remove the ink from their pens while going up in an aeroplane?
Answer:
While going up in an aeroplane the atmospheric pressure decreases with height. When aeroplane is going up, the ink in the pen tends to ooze out to equalise the pressure. This may spoil the clothes of the passengers. So they are advised to remove ink from the pen.