Question 3.
Which one of the following is a developed nations?
(a) Mexico
(b) Ghana
(c) France
(d) Sri Lanka
Answer:
(c) France

Question 4.
The position of Indian Economy among the other strongest economies in the world is ……………………….
(a) Fourth
(b) Seventh
(c) Fifth
(d) Tenth
Answer:
(b) Seventh

Question 7.
A scientific study of the characteristics of population is …………………………..
(a) Topography
(b) Demography
(c) Geography
(d) Philosophy
Answer:
(b) Demography

Answer the following questions in one or two sentences.

Question 21.
Write the meaning of Economic Growth?
Answer:
A country’s economic growth is usually indicated by Gross Domestic Product (GDP). The GDP is the total monetary value of the goods and services produced by that country over a specific period of time, usually one year.

Question 22.
State any two features of a developed economy?
Answer:

Question 24.
Point out any one feature of the Indian economy?
Answer:
India has a mixed economy.

Answer the following questions in one paragraph.

Question 29.
State Ambedkar’s Economic ideas on agricultural economics?
Answer:
Dr. B.R.Ambedkar was a versatile personality. In 1918, he published a paper “Smallholding in India and their remedies” citing Adam Smith’s “Wealth of Nations”, he made a fine distinction between “Consolidation of holdings” and “Enlargement of holdings”.

Question 33.
Write a short note on Welfare Economics given by Amartya Sen?
Answer:

Answer the following questions in about a page.

Question 35.
Explain the strong features of the Indian economy?
Answer:

1. Democracy : He was a firm believer in democracy. He believed in free speech, civil liberty, adult franchise and the rule of law and parliamentary democracy.

2. Secularism : Secularism is another signal contribution of Nehru to India. There are so many religions in India but there is no domination by religious majority.

3. Planning : Nehru was responsible for the introduction of planning in our country. The plan was essentially an integrated approach for development. Planning for Nehru was essentially linked up with industrialization and eventual self-reliance for the country’s economic growth on a self-accelerating growth.

4. Advancement of Science : Nehru made a great contribution to the advancement of Science, research, technology and industrial development. In his period, many IITs and research institutions were established. He always insisted on scientific temper.

Question 38.
Write a brief note on the Gandhian economic ideas?
Answer:
Gandhian Economics is based on ethical foundations. Gandhi wrote, “Economics that hurts the moral well-being of an individual or a nation is immoral, and therefore, Sinful”. Again in 1924, Gandhi repeated the same belief “ that economy is untrue which ignores or disregards moral values”.

7. The Doctrine of Trusteeship:

Question 4.
…………………….. is the basic causes of poverty.
(a) Low agriculture productivity
(b) Rapid growth of population
(c) Low saving and disguised unemployment
(d) All the above
Answer:
(d) All the above

Question 10.
……………………… is thereby also called as the backbone of the Indian economy.
(a) Agricultural
(b) Industrial
(c) Small Scale Industries
(d) Cottage industries
Answer:
(a) Agricultural

Answer the following questions in one or two sentences.

Question 2.
Define “Renewable Resources’?
Answer:
Renewable energy sources
These are the kind of energy source which can be renewed or reused again and again. These kinds of materials do not exhaust or literally speaking these are available in abundant or infinite quantity. Example for this kind include

Answer the following questions in one paragraph.

The education system in India: 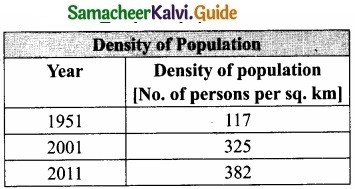 Answer the following questions in about a page.