Question 7.
A tree is believed to be releasing oxygen during nighttime. Do you believe the truthfulness of this statement? Justify your answer by giving reasons?
Answer:
Yes, a tree is believed to be releasing O2 during nighttime because at night CAM plants fix CO2 with the help of phospho Enol Pyruvic acid and produce oxala acetic acid, which is converted into malic acid-like C4 cycle.

Question 10.
When there is plenty of light and higher concentration of O2, what kind of pathway does the plant undergo? Analyse the reasons.
Answer:
The rate of photosynthesis decreases when there is an increase in oxygen concentration. This Inhibitory effect of oxygen was first discovered by Warburg (1920) using green algae, Chlorella.

I. Choose the Correct Answers

Question 6.
The pigment responsible for the yellowing of leaves during autumn season is
a) Violaxanthin
b) Fucoxanthin
c) Phycobillin
d) Lycopene
Answer:
d) Lycopene

Question 12.
Which one of the photosynthetic pigments is called shield pigment:
(a) carotenes
(b) chlorophyll ‘b’
(c) pheophytin
(d) carotenoids
Answer:
(d) carotenoids

Question 13.
Which of the following equation correctly sums up photosynthesis

Question 21.
Products of light reaction in photosynthesis are
a) ATP & NADPH2
b) ADP & glucose
c) Ferredoxin and cytochrome b6
d) Cytochrome
Answer:
a) ATP & NADPH2

Question 28.
The process of photophosphorylation was discovered by
a) Priestly
b) Calvin
c) Amon
d) Warburg
Answer:
c) Arnon

Question 29.
Which of the following is a C4 plant
a) Potato
b) Sugarcane
c) Pea
d) Papaya
Answer:
b) Sugarcane

Question 37.
Which of the following plant is a better photosynthesis?
a) Mango
b) Sugarcane
c) Wheat
d) Rice
Answer:
b) Sugarcane

Question 39.
Which of the following factors affect the rate of photosynthesis?
I. Light
II. Protoplasmic factor
III. Hormones Codes
IV. Haemoglobin
a) only III
b) I and II
c) only IV
d) I, II, and III
Answer:
d) I, II and III

Question 44.
Kranz anatomy is traced in the Leaves of
a) Wheat
b) Potato
c) Mustard
d) Sugarcane
Answer:
d) Sugarcane

Question 46.
The existence of light and dark reaction of photosynthesis was proved by
a) Blackman
b) Emerson
c) Warburg
d) Arnon
Answer:
a) Blackman

Question 49.
Say True or False with respect to C2 cycle
I) RUBISCO has the most abundant protein on earth.
II) Photorespiration does not yield any free energy in the form of ATP
III) The end product is a 2 – c compound. So the cycle is known as C2 cycle
IV) Under certain conditions 50% of the photosynthetic potential is lost because of photorespiration.

Question 1.
Assertion (A): Chlorophyll appears green.
Reason (R): It absorbs light mainly in the region of green part of light spectrum.
Answer:
c) Assertion (A) is False but Reason (R) is true.

Question 3.
Assetion (A): Non cyclic photo phosphorylation occurs in the stroma of chloroplasts
Reason (R): There is a continuous flow of electrons in this process.
Answer:
d) Both Assertion (A) and Reason (R) are false.

Question 4.
Assetion (A): Carotenes and Xanthophylls are soluble in either
Reason (R): These are accessory pigments of photosynthesis
Answer:
b) Both Assertion (A) and Reason (R) are true, Reason is not the correct explanation of Assertion

Question 5.
Assetion (A): Carotenoids are accessory pigments
Reason (R): Absorbed light energy is transferred to reaction centre by carotenoids.
Answer:
a) Assertion (A) and Reason (R) True and Reason is the correct explanation of Assertion.

Question 1.
What is the function of the plant in the universe?
Answer:
Plants are the major machinery which produces organic compounds like carbohydrates,lipids, proteins, nucleic acids and other biomolecules.

Question 2.
What is PAR?
Answer:
It refers to Photosynthetically Active Radiation, which is between 400 – 700 nm photosynthetic rate is maximum in blue and red light – Green light induces lowest rate of photosynthesis.

Question 6.
Write down the significance of photorespiration.
Answer:

Question 7.
What are the conclusions of Hill’s Reaction?
Answer:

Question 8.
What are Xanthophylls?
Answer:
Yellow (C40H56O2) pigments are like carotenes but contain oxygen. Lutein is responsible for yellow colour change of leaves during autumn season. Examples: Lutein, Violaxanthin and Fueoxanthin.

Question 11.
Why do we call carotenoids shield pigments?
Answer:

Question 13.
What are Quantosomes?
Answer:

Question 14.
What is Bioluminescence?
Answer:
It is the special aspect of few living organism, in which there are some biochemical substances production is responsible for the emission of light by a living organism.

Question 16.
Explain water oxidizing clock or S state mechanism.
Answer:
The splitting of water molecule, mechanism was studied by KoK et, al (1970).
It consists of a series of 5 states so, s1, s2, s3, s4.
Each sate acquires positive charge by a photon (hv) and after the state s4 – if acquires 4 positive charges 4 electron and evolution of oxygen.

Question 19.
What are the conditions for the occurrence of Non-cyclic photophosphorylation?
Answer:

Question 23.
What will be the quanta requirement for the complete light reaction which releases 6 oxygen molecules?
Answer:

Question 2.
What are the properties of light.
Answer:

Question 5.
What is meant by the ground state?
Answer:
The action of photon plays a vital role in the excitation of pigment molecules to release an electron. When the molecules absorb a photon, it is in an excited state. When the light source turned off, the high-energy electrons return to their normal low-energy orbitals as the excited molecule goes back to its original stable condition known as the ground state.

Question 6.
Write down the significance of Photosynthesis.
Answer:

Question 7.
What is DCMU?
Answer:

Question 8.
State black man’s law of limiting factor.
Answer:
It is a modified law proposed by Liebig’s law of minimum.

Definition:
According to Blackman at any given point of time, the lowest factor among essentials will limit the rate of Photosynthesis.

Question 11.
What is Kranz Anatomy or what is meant by Dimorphism of Chloropiasts in C4 plants.
Answer:

Question 13.
Compare the C3 and C4 on the basis of ATP production.
Answer:

Question 4.
Difference between photosystem I and Photosystem II.
Answer:

During this flow ATP is generated:

Non Cyclic Photophosphorylation:
The electron flow looks like the letter ‘Z’ so known as Z scheme. It has 3 stages. 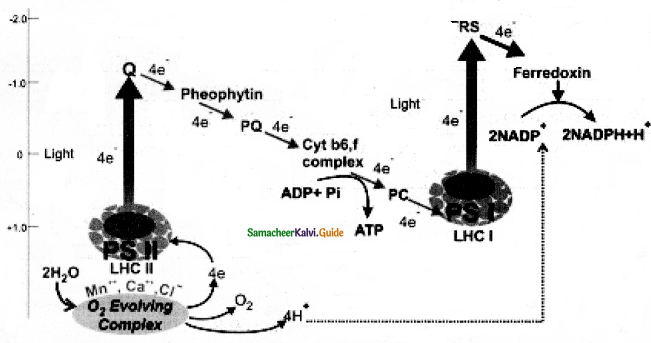 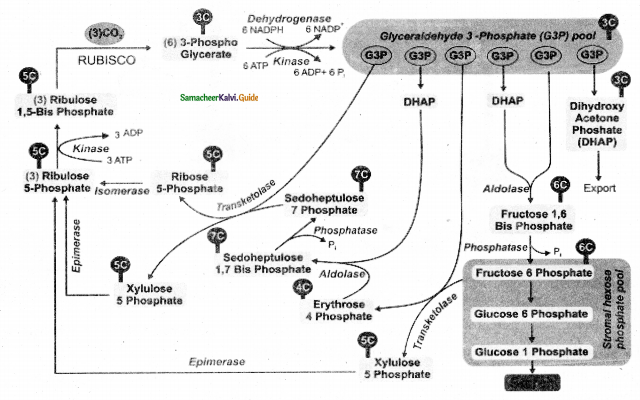 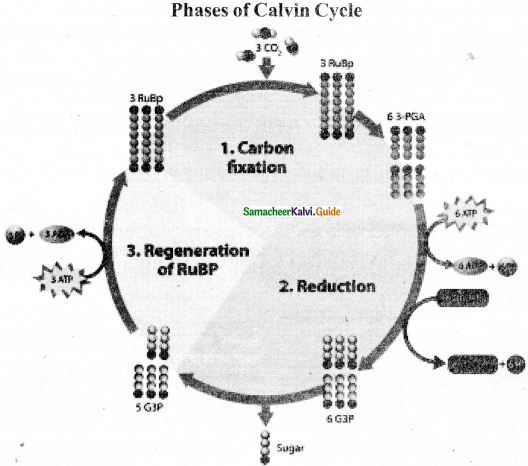 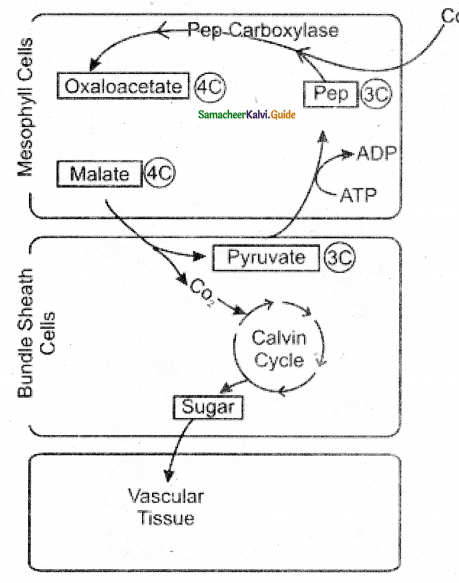 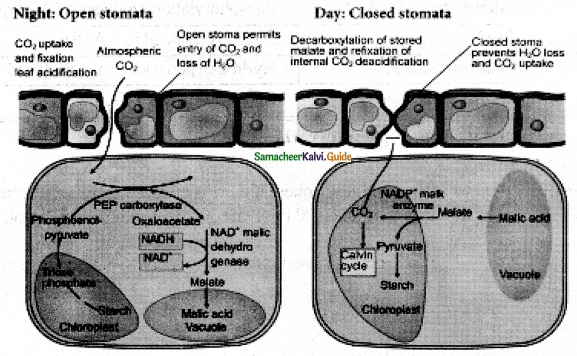 Question 11.
Give the flow chart of Photo respiration or C2 cycle.
Answer: 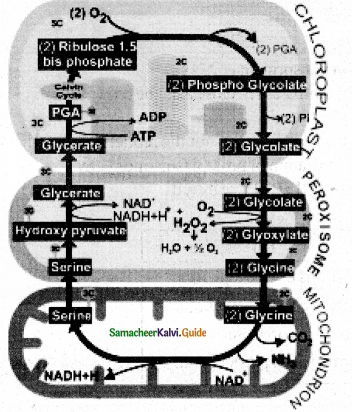 Question 13.
Give any 5 External factors affecting photosynthesis.
Answer:
1. Carbon dioxide:
330ppm or 0.3% of CO2 is available in the atomsphere If there is an increase in CO2 concentration the rate of Photosynthesis increases -If it increases beyond 500 PPm rate of photosynthesis will be inhibited.

2. Oxygen:
When there is increase in oxygen concentration there is unhibition of photosynthesis Warburg – studied this in chlorellain 1920. This effect is known as Warburg effect.

Question 14.
Explain the test tube funnel experiment.
Answer:
AIM: To proove that oxygen is evolved during Photosynthesis.
Procedure:
Take some hydrilla plant and place them at the bottom of a beaker containing water – Add, little NaHCO3 in to the water. Cover plant with an inverted funnel Invert a test tube over the funnel keep this set up in sun light. 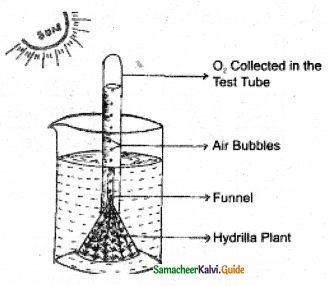