Question 2.
Who had borrowed money from the East India Company to meet the expenses he had incurred during the Carnatic wars ?
(a) Velunachiyar
(b) Puli Thevar
(c) Nawab of Arcot
(d) Raja of Travancore
Answer:
(c) Nawab of Arcot

Question 8.
Where were the sons of Tipu Sultan sent after the Vellore Revolt?
(a) Calcutta
(b) Mumbai
(c) Delhi
(d) Mysore
Answer:
(a) Calcutta

Question 2.
Identify the Palayams based on the division of east and west.
Answer:
The two prominent blocs were Eastern and Western Palayams:

Question 3.
Why was Heron dismissed from service?
Answer:
Colonel Heron was urged to deal with Puli Thevar as he continued to defy the authority of the company. Puli Thevar wielded much influence over the western Palayakkarars. Heron had to abandon the plan for want of cannon and of supplies and pay to soldiers. He retired to Madurai. He was then recalled and dismissed from sendee.

Question 4.
What was the significance of the Battle of Kalakadu?
Answer:

Question 6.
Highlight the essence of the Tiruchirappalli Proclamation of 1801.
Answer:

Question 7.
Point out the importance of the Treaty of 1801.
Answer:
Under the terms of the Carnatic Treaty of 31 July 1801, the British assumed direct control over Tamilagam and the Palayakkarar system came to an end with the demolition of all forts and disbandment of their army.

VI. Answer the questions given under each caption

(b) What were the martial arts in which she was trained?
Answer:
Velunachiyar had training in martial arts like valari, stick fighting and to wield weapons.

(c) Whom did she marry?
Answer:
She married Muthu Vadugar the Raja of Sivagangai.

(d) What was the name of her daughter?
Answer:
Her daughter name was Vellachinachiyar.

(b) How did he earn the title “Chinnamalai”?
Answer:
Once when Tipu’s diwan Mohammed Ali was returning to Mysore with the tax money, Theerthagiri blocked his way and took back all the tax money. He let Mohammed Ali go by instructing him to tell his Sultan that ‘Chinnamalai; who is between Sivamalai and Chinnamalai, was the one who took away taxes. Thus, he gained the name ‘Dheeran Chennamalai’.

(d) Why and where was he hanged to death?
Answer;
He was hanged at the top of the Sankagiri Fort on 31 July 1805 because he refused to accept the rule of the British.

Event 2: Collector Jackson against the wish of the Madras Government wanted to send an army to collect the revenue dues from Kattabomman.

Event 3: Inspired by the Marudhu brothers Tiruchirapaili proclamation Kattabomman was interested to join the confederacy.

Question 2.
Highlight the tragic fall of Sivagangai and its outcome.
Answer:
In May 1801, the English attacked the rebels in Thanjavur and Tiruchirappalli. The rebels went to Piranmalai and Kalayarkoil. But they were defeated by the forces of the English. In the end, the able commanders of the English company helped. Unfortunately, the rebellion failed and Sivagangai was annexed in 1801.
Outcomes

The immediate cause for the revolt was triggered by the new military regulations introduced by the Commander in Chief Sir John Cradock.

Question 1.
Teacher can ask the students to prepare an album of patriotic leaders of early revolts against the British rule in Tamil Nadu. Using their imagination they can also draw pictures of different battles in which they attained martyrdom.
Answer:
Few names of the patriotic leaders of the’early revolt against the British mle in Tamil Nadu are listed below.

If the student is very good in drawing skills, then instead of pasting pictures, they can also draw two or three of the patriotic leaders images and write their name below and prepare an album. Students can also use their creativity, imagine a battle field and can portrait that also.

Sepoy : Maharaja, English East India Company’s servant brought a message for you. Shall I ask him to let in. I seek your permission.

Kattabomman: What message you have brought?

Servant : Maharaja (Reading the message)
I, “The collector of Ramnad” issuing order to Kattabomman to meet in person.

Kattabomman : yes you can go

Kattabomman and his Minister and some soldiers going to meet Jackson after hearing he was camping at placard showing courtallam.

Placard showing Srivilliputur (You are asked to come to Ramanathapuram)

Kattabomman waiting outside the gate to meet the Collector. After lhour he was asked to get inside the court of collector Jackson.

Jackson: Not noticing him wantedly I am
Kattabomman: I am kattabomman who is collector Jackson.
Jackson: Got angry Hay who are you nian calling me by name?
Kattabomman: I am Kattabomman wants to know who you are? Asking me the question.
(Further got irritated)
Jackson: I am collector Jackson. Are you the defiant Kattabomman.
Kattabomman: I want to know for what reason I was asked to come over here. As a coward ran and came to Ramanathapuram Mr. Jackson.
Jackson: Shut up man. You have the charge on you that you didn’t pay neither the tribute not the tax arrears.
(Irritated by his command)
Kattabomman: Whom do you expect to pay tribute or Taxes. Me? Why I should pay taxes. It’s our land the nature is giving water to the field. We the people till the land, sow the seeds plant the saplings watered the field, nurtured the plants, removed the weeds. What work you have done for asking the tax.
Jackson: Hay man Kattabomman you are talking too much, Your region belong to us.
Kattabomman: (Laughing) Is it so? Who gave you the right of possession?
Jackson: (Furiated yelling) Guards arrest him.
(Guards entry)
Kattabomman: Sensing the danger took out the sword (fighting and escaping from that place)
(screen)

Question 3.
A comparative study of Vellore Revolt and 1857 Revolt by students be tried enabling them to find out to what extent Vellore Revolt had all the forebodings of the latter.
Answer:
Common causes for the Revolt at Vellore and Revolt of 1857.

These points clearly shows that the Vellore Revolt had all the forebodings of the latter.

Question 9.
On his return to Panchalamkurichi ………………….. represented to the Madras council.
(a) Kattabomman
(b) Marudhu brothers
(c) Puli Thevar
(d) Dheeran chinnamalai
Answer:
(a) Kattabomman

Question 10.
Which city was annexed at the end of the Anglo-Mysore War in 1799?
(a) Ramanathapuram
(b) Coimbatore
(c) Panchalamkuruchi
(d) Pudukottai
Answer:
(b) Coimbatore

Question 14.
Oomathurai and Sevathaiah the two brothers of Kattabomman escaped from the Palayamkottai prison to:
(a) Kamudhi
(b) Sivagangai
(c) Kerala
(d) Thiruchirappalli
Answer:
(a) Kamudhi

Question 1.
Write a note on Carnatic treaty.
Answer:
The suppression of the Palayakkarar rebellions of 1799 and 1800-1801 resulted in the liquidation of all the local chieftains of Tamil Nadu. Under the terms of the Carnatic treaty of 31 July 1801. The British assumed direct control over Tamilagam and the Palayakarar system to an end with the demolition of all forts and disbandment of their army.

Question 2.
Why was the Revenue collection of the southern Palayakkarars was given to the company Rule?
Answer:

Question 3.
Write a note on Hyder Ali.
Answer:
Hyder Ali was the ruler of Mysore. He was a bitter enemy of England. He was born in 1772. Though he started his career as a soldier, he rose to the position of commander-in-chief. In 1766, when the Raja of Mysore died, Hyder Ali proclaimed himself as the ruler and became the Sultan of Mysore. Tipu Sultan was the son of Hyder Ali.

Question 6.
Write about the brave act of Kuyili the friend of Velunachiyar.
Answer:

Those who participated in the Rebellion were: Marudhu Pandiyar of Sivagangai, Gopala Nayak of a Dindigul, Kerala verma of Malabar and Krishnappa Nayak and Dhoondaj i of Mysore.

VI. Answer the questions given under each caption

(c) What commanded the troops?
Answer:
On 1st September 1799, an ultimatum was served on Kattabomman to surrender.

(b) What was the reward given to the people who suppressed the revolt?
Answer:
Col. Gillespie was given 7,000 pagodas. The officers and men engaged in the suppression were rewarded with prize money and promotion.

Question 3.
New Military Regulations
(a) What were the Indian soldiers asked to do according to new’ military regulation?
Answer:
According to the new military regulation the Indian soldiers were asked not to wear caste marks or ear rings when in uniform. They were to be cleanly shaven on the chin and maintain uniformity how their moustache looked.

(b) How did the new turban add fuel to fire?
Answer:
The new turban was the leather cockade made of animal skin.

(d) What was the Company’s reaction?
Answer:
The company remained silent. It did not pay any notice to the sepoys grievances.

Question 4.
The Seige of Panchalamkurichi

(d) What was the response of Kattabomman?
Answer:
Kattabomman refused to surrender.

(d) From where did the forces reinforced to fight with the revolters?
Answer:
British reinforcements were rushed from Bengal, Ceylon and Malaya.

(a) Who deliberate on the future course of action against the company Government?
Answer:
The dispossessed little kings and feudal chieftains.

(b) What was the culmination of the Palayakkarar wars?
Answer:
The Vellore Revolt of 1806

(d) What bothered the Indian sepoys much?
Answer:
The new recruitment of the sepoys to the army.

Question 2.
How did Velunachiyar able to get back her territory (Sivagangai)?
Answer:

Question 4.
Give an account of Marudhu brothers Rebellion of 1800.
Answer: 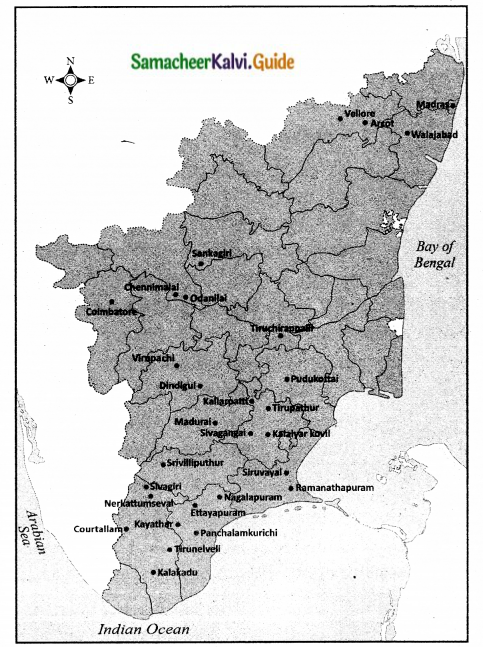