Question (a)
What does INSV stand for?
Answer:
INSV Stands for “Indian Naval Ship Vessel”.

Question (c)
Who is Tara-Tarini?
Answer:
Tara-Tarini is the second sailboat of the Indian Navy. The boat was named after the famous ‘Tara- Tarini’ temple in the Ganjam district of Odisha.

Question (d)
Where did the crew undergo their basic training?
Answer:
The crew underwent their basic sail training courses in Mumbai at the Indian Naval Waterman ship Training Centre (INWTC), and at various schools in the southern naval base in Kochi. They even sailed on INSV Mhadei up and down to Mauritius in 2016 and 2017 and also to Cape Town in December 2016.

Question (h)
Which quality of the skipper helped to bring out a successful expedition?
Answer:
To complete the journey with ultimate honesty was the quality of skipper which helped to bring out a successful expedition. Rather than the destination, it was the journey which was the most important. So her contention was to make sure that they go by the rules of circumnavigation which say that one need not use any auxiliary means of repulsion and take anybody else’s assistance.

A. Read the statements given below and state whether they are true or false. If false, then write the correct answer in the space given.

Question 4.
The crew started their expedition on 10 July 2017 from Mumbai
Answer:
(False)

Question 5.
Dilip Donde was the first person to go on a non-stop solo circumnavigation
Answer:
(True)

B. Answer the following questions briefly.

Question 1.
Mention the special features of INSV Tarini?
Answer:
INSV Tarini is the second sailboat of the Indian Navy. It is a 55-foot sailing vessel built indigenously in India by M/s Aquarius Shipyard Pvt. Ltd, located in Goa. After undergoing extensive sea trials, she was commissioned to the Indian Navy service.

Question 3.
How did the all-women Indian Navy crew go about their voyage?
Answer:
Indian Navy’s all-women crew was the first-ever to circumnavigate the globe. The crew started their voyage from Goa, flagged off by the Defence Minister of India, Nirmala Sitharaman. It – was a historic day, marked in navigation history, globally. It covered the expedition in five legs with stop-overs at four ports viz. Fremantle, Australia; Lyttelton, New Zealand; Port Stanley, the Falklands and Cape Town, South Africa for replenishment of ration and repair as necessary, before returning to Goa in April 2018. The six-member women crew broke many stereotypes during their record-setting sail.

Question 5.
What sort of training did the crew undergo before their expedition?
Answer:
The crew started with some theoretical courses on navigation, communication and weather prediction. Classroom courses were different from sailing outside. So, they were given hands-on training, like, how to repair things and how to deal with emergencies, when the weather is rough, during medical needs and training needing tactical aspects as well. They underwent their basic sail training courses in Mumbai at the Indian Naval Waterman ship Training Centre (INWTC), and at various schools in the southern naval base in Kochi. They even sailed on INSV Mhadei to Mauritius in 2016 and 2017 and back and also to Cape Town in December 2016.

Question 6.
How did the crew members work as a team to make their expedition successful?
Answer:
They worked together to solve a problem.

Question 7.
What challenging tasks did the team face during their voyage?
Answer:
In the South Pacific, they encountered a storm where the seas were almost nine to ten meters high and the winds were picking up to 60-70 knots. It was normal on sea where there was hardly any land mass to stop the winds. However, after a lot of hard work and effort, they were able to fix it together and feel blissful. They would remember those incidents because it gave them the strength to move on and overcome those challenges.

Question 8.
What sort of activities did the crew engage in during their long voyage?
Answer:
They picked up some hobbies. They kept posting of delicacies. They read books and did some quilting and craftwork. They also watched movies and listened to music.

Question 10.
Which factor motivated the crew to undertake this expedition?
Answer:
The crew was hopeful of the prayers from the country. They also did not want to frighten the people about their

Question 1.
What was the voyage aimed to?
Answer:
The voyage was aimed to showcase the ‘Make in India’ initiative by sailing onboard indigenously-built INSV Tarini.

Question 1.
Highlight the factors responsible for the all-women Indian Navy crew to carry out their expedition.
Answer:
The support the crew members received was a major factor. When they knew that they were doing well and looked after themselves well, in spite of all apprehensions they were supportive. The crew members’ personal aim and target mattered a lot. Mostly they wanted to make sure that they complete the journey with ultimate honesty without the use of engines.

Then the destination, the journey was important. So their contention was to make sure that they go by the rules of circumnavigation without any means of repulsion and anybody else’s assistance. The L presence of mind and common sense to make decisions and act quickly was an added factor. They had to quickly do an analysis of problem-solving techniques. Ego should never come I amidst them. Teamwork helped them to collaborate and work together. Mutual understanding I was important too.

One would heat the water while the other would heat the gloves or even rested. Overall the confidence you had in each other than the trust and acceptance as every member of the crew to be a family was a must to carry out the expedition.
“It’s about women helping women and women doing things together and supporting each other.”

Navika Sagar Parikrama was a project,It was undertaken to empower women. K u initiated in the navy for Nari Sakthi. ‘Make in India’ – sailing in INSV Tarini. A crew of six army women was selected for the voyage. They were selected based on their skills. The boat had ail facilities and encouraged eco – friendly resources.

They started classroom courses. Later on, they were given hands-on training. The voyage started from Goa on 10 Sep 2017. It returned to Goa on 21 May 2018 after 254 days. They overcome all the sea challenges and completed their expedition. This voyage proved women’s empowerment. They showed that they can do anything.

Question 2.
Write in detail about the selection and training process which the crew underwent?

Introduction:
Women play a vital role in our society. Women’s achievements are remarkable in various fields. One of the achievements ¡s the all-women Indian Navy who circumnavigated the world for 254 days. It will be discussed in this essay.

Training and selection:
The training started with some theoretical courses on navigation communication and weather prediction. Six women out of thirty were selected. They underwent basic sail training courses in Mumbai at the Indian Naval Waterman ship training centre (INWSTC).

Practical session:
They sailed on INSV Mhadhe’s to Mauritius and also to Capetown. The trip was a tutorial for them to manage water, food, and even electricity. The crew was mentored by commander Dilip Donde.

Conclusion:
They decided to go on the expedition to show to the world that women are capable of making great accomplishments.

D. Pick out the idioms and phrases from the box and write them in the blanks equivalent to their meaning. One is done for you.

E. Read the given passage carefully and fill in the blanks with suitable phrasal verbs from the help box.

F. Read the given passage carefully and fill in the blanks with suitable phrasal verbs from the help box.

Riya is a young dancer who feels contented and satisfied with herself. Let’s hear from her.

G. Listen to the passage read by the teacher and say whether the given statement is true or false.

Question 2.
At the age of seventeen, she captained the Indian Women’s cricket team?
Answer:
False

Question 3.
Preethi Srinivasan was not only a cricketer but also a runner?
Answer:
False

Question 4.
Preethi’s own trauma inspired her to create Soul Free, a foundation for those suffering from mental illness?
Answer:
False

Story Telling:
Storytelling is an art which involves planning, research, and skill. A good storyteller makes decisions ahead that drive their stories forward, engage their audience, and relate information important to the telling of the story.

Techniques and Presentation skills:
There are certain techniques that help narrate a story perfectly.

H. Read the clues given below and develop your story. Narrate your story to the class.

He wondered how it would get there again. The spider climbed up and fell back again. Again It tried to climb up to the ceiling. But it fell again. It made nine such attempts. The spider did not get any success. He climbed up once again. At last, the spider succeeded in reaching the roof. Bruce imitated the spider and its example. He too tried once again. He was quite successful this time. He overcame his enemies easily.

I. Develop a story with the given pictures and narrate it to your class. Your story must p have a plot and vivid details.

A huge chest with treasures worth 100 million. Over ninety-five percent of the earth’s oceans have yet to be explored. And some adventures are let on uncovering the vast majority of uncharted territory, as well as the treasures that might have been buried within.

A team of experts from around the world comes together, in July 2018, with an effort to explore our mysterious oceans. While searching the seafloor, the team stumbled upon an incredible treasure that had been lying dormant for 113 years. The team sent divers down into the water in the submarines to begin the hunt for shipwrecks.

Just under a mile off South Korean island the sea of Japan, the crew made their first discovery. They found a huge chest with valuables worth 100 million. Their hunt was a big challenge but they reached it safely. They are celebrating their success with the world with a broad smile on their faces. Really it is great jubilation on the seashore. 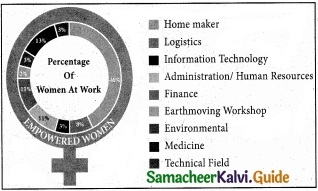 J. Read the data below and answer the following questions.

Question 2.
In which field of work is women’s involvement in the second highest?
(a) Logistics
(b) Homemaker
(c) Medicine
(d) Administration/Human resource
Answer:
(c) Medicine

K. Read the given slogans and match them appropriately with their theme.

L. Look at the images of familiar advertisements given below. Identify the products p Ng 7/ and try to frame your own slogans for each one of them.

M. Look at the pictures given below and frame your own slogans. 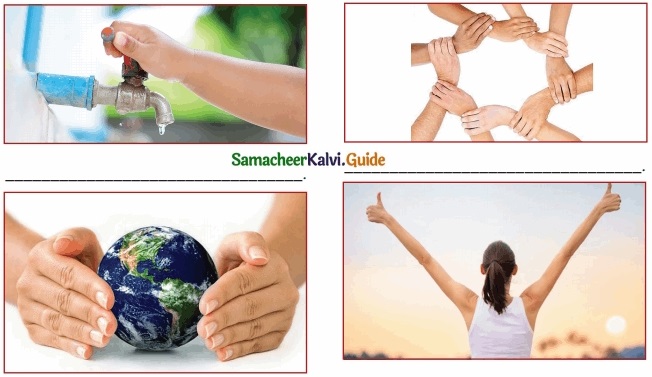 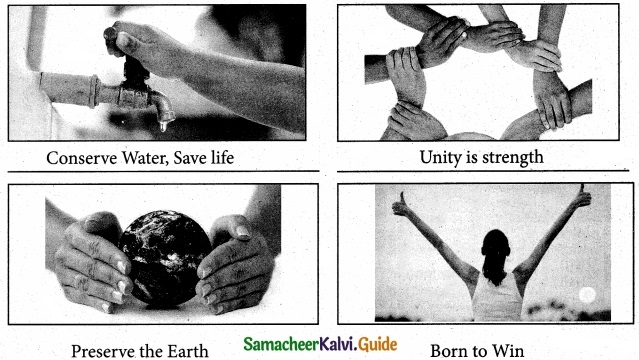 Question 1.
Imagine that you have parked your (two-wheeler/bicycle inside the school premises. You find it missing in the evening. Write a complaint to the head of the school regarding this issue.

Question 2.
Write a complaint to the officer of the PWD department to take immediate actions to maintain cleanliness in the Children’s Park in your locality.

Question 3.
Write a letter to the manager of a famous daily, ordering a subscription for your school library.

A. Complete the sentences in present tense forms.

B. Complete the sentences in past tense forms.

C. Fill in the blanks using the verbs in the brackets in the future form.

D. Underline the verbs and identify the tense forms.

E. In the following passage, some words are missing. Choose the correct words from the given options to complete the passage.

F. The following passage has not been edited. There is one error in the tense of the verb in each line. Write the wrong word as well as the correct word in the given place. One is done for you. 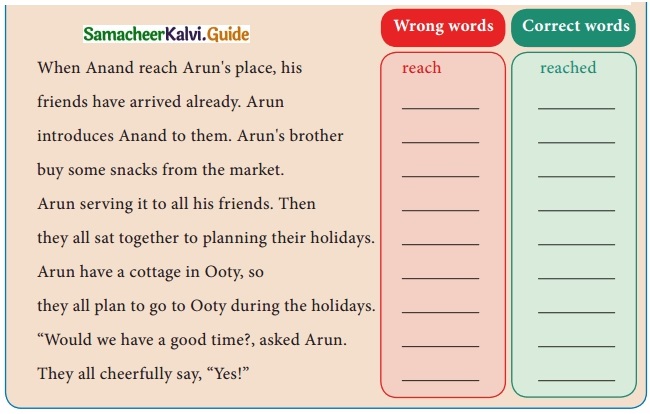