A. Based on your understanding of the poem, re|ad the following lines and answer the questions given below.

10. “My heart was so light
that I sang day and night,
For all nature looked gay.
“You sang, Sir, you say”?
(a) Mention the rhyme scheme employed in the above lines.
Answer:
aabb’ is the rhyme scheme.

B. Based on your understanding of the poem, complete the summary using the phrases given below.

C. Answer each of the following questions in a paragraph about 100 words.

Question 1.
‘Some crickets have four legs and some have two’. Elucidate this statement from the poet’s point of view.
Answers:
The poet is comparing the lazy crickets to the two-legged creatures – human beings. The poetic device Metaphor is perfectly used to fit into the situation. Everyone knows that crickets have four legs. But he says some have two to compare the silly cricket to the two-legged human-beings who sometimes are as lazy and silly as the cricket in this poem.

The poet wants to suggest that this story is not entirely a fable; rather, it is related to the real world. Surely, some people are as careless and lazy as cricket is. Likewise, some humans like cricket also don’t plan out for the future or for the bad times. They just enjoy the present moment. The poet is thus calling such people as mindless as the cricket.

Once an ant and a cricket lived in a forest. The cricket was fun-loving. It enjoyed singing all through the summer. But the ant was hard working. In the winter season, snow covered the earth. There was no piece of food. Cricket trembled in snow. He was hungry.

So it asked the ant to give him some food. But the ant never borrows or lends. It refused the cricket’s request. It drove him out of his place without giving anything. The poet teaches a lesson to human beings. We must work hard, earn money, and save something for the future.

Attitude of Cricket:
The cricket was so lazy. It sat alone and sang happily along with the summer. It didn’t worry about the future. It didn’t save anything for the winter. It enjoyed singing all through the summer.

Attitude of Ant:
The Ant was hard-working in nature. It worked hard and saved food for the winter. It never borrows or lends from anyone.

Comparison:
The poet projects the cricket as a borrower and the ant as neither borrower nor a lender. However, the attitude of the ant in the last stanza is quite disappointing because the ant sent away the poor little cricket.

Conclusion:
Through this poem, the poet tells us not be like the cricket and he advises us to work hard and plan for the future like the wise ant.

Title: The Ant and the Cricket
Author: Aesop
Characters: Ant and Cricket
Theme: Contrast is the shadow of comparison

In this poem ‘The Ant and the Cricket’, we find the good and bad nature of the ant and the cricket respectively. The cricket is lazy. He sang and dance during summer. The ant was wise and hard working. It saves its food for winter.

It teaches us the moral values of life. It never borrows nor lends. It’s lives on this principle. It has no concern over the foolish cricket. It tells that it is a servant and friend of the cricket. It sends the cricket out of its house without giving anything. This shows the ant is hardworking and clever.

‘Work while you work; Play while you play;
That’s the way to be happy and gay’.

Question 3.
If given a chance, who would you want to be – the ant or the cricket. Justify your answer.
Answer:
If given a chance to be a Cricket or an Ant, it is obvious that I would like to be an ant. I surely wouldn’t like to be called a silly cricket. Who would like to be foolish like the Cricket? I do like to enjoy life and have fun but I strongly do understand the importance of seeing the future needs. I prefer to be wise and intelligent rather than being foolish and silly in my behaviour. Year after year, I have witnessed the different seasons.

I do know that during winter, I will be deprived of food if I am not discrete. Hence, I will be judicious and meticulously work for the future like the Ant. I hate to be put to shame. I do not like the idea of borrowing or lending like the Cricket. I agree it’s indeed a shame to be a debtor. So I will never be a debtor borrowing things from others like Cricket. I hate to brood and be morose.

The Cricket is pushed to such a state looking at the empty cupboard, Surely I do not want to be a moaner. I do like to be courageous but not like the Cricket that became courageous because of starvation and famine. I cannot be so shameless like the Cricket and get turned down by the Ant.
‘I would like to live a day in the life of an ant and hope not to get squashed. ’

I want to be an ant. An ant is a symbol of wisdom and hard work. It makes use of the opportunity to work hard to save food for winter. It is aware of the hard times during the winter. It never wastes the time like cricket in singing and dancing.

Cricket is foolish and lazy. They do not save anything. They suffer a lot in the future and old age. They starve like cricket. They borrow for tomorrow and remain in sorrow. We must learn the lesson from the ant. We must plan with foresight for our future and old age. If we live like the ant, we need not worry about the future.

‘Work is worship’
‘Hard work is the key to success’

“Be an ant always and never be a cricket”

The Ant and the Cricket Summary of the poem 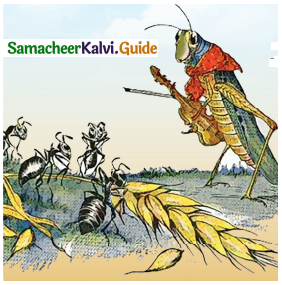 The Poem ‘The Ant and the cricket’ tells about a hardworking ant and a lazy cricket. The last line of the poem says ‘Some crickets have four legs and some have two’ serves as a moral for the readers. The last line tells about the lazy humans who don’t save anything and don’t worry about their future. The poet tells us not to be lazy as the cricket and he wants us to be like the hardworking ant.