7. Match items in Column I – with the items of Column – II and assign the correct code. 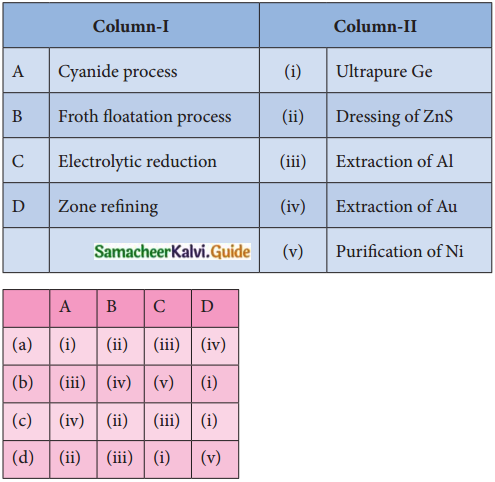 12. Which one of the following ores is best concentrated by froth floatation method?
a) Magnetite
b) Heamatite
c) Galena
d) Cassiterite
Answer:
c) Galena

17. The following set of reactions are used in refining Zirconium

22. In the Ellingham diagram, for the formation of carbon monoxide

Question 1.
What is the difference between minerals and ores?
Answer:
Minerals:

Question 3.
What is the role of Limestone in the extraction of iron from its oxide Fe2O3?
Answer:

Question 6.
Explain the zone refining process with an example. (PTA – 6 MARCH 2020)
Answer:
1. Zone Refining method is based on the principles of fractional crystallisation. When an impure metal is melted and allowed to solidify, the impurities will prefer to be in the molten region, i.e. impurities are more soluble in the melt than in the solid-state metal.

2. In this process, the impure metal is taken in the form of a rod. One end of the rod is heated using a mobile induction heater which results in the melting of the metal on that portion of the rod.

3. When the heater is slowly moved to the other end the pure metal crystallises while the impurities will move on to the adjacent molten zone formed due to the movement of the heater. As the heater moves further away, the molten zone containing impurities also moves along with it.

4. The process is repeated several times by moving the heater in the same direction again and again to achieve the desired purity level.

5. This process is carried out in an inert gas atmosphere to prevent the oxidation of metals.

6. Elements such as germanium (Ge), silicon (Si) and gallium (Ga) that are used as semiconductors are refined using this process.

Question 7.
Using the Ellingham diagram
(A) Predict the conditions under which
i) Aluminium might be expected to reduce magnesia.
ii) Magnesium could reduce alumina.
B) It is possible to reduce Fe2O3 by coke at a temperature around 1200K
Answer:
A) i) Ellingham diagram for the formation of Al2O3 and MgO intersects around 1600K. Above this temperature aluminium line lies below the magnesium line. Hence we can use aluminium to reduce magnesia above 1600K.

B) In Ellingham diagram above 1000K carbon line lies below the iron line. Hence it is possible to reduce Fe2O3 by coke at a temperature around 1200K.

Question 10.
Explain the following terms with suitable examples, i) Gangue ii) Slag (PAT – 2)
Answer:
i) Gangue:
The non-metallic impurities, rocky materials and siliceous matter present in the ores are called gangue.
(eg): SiO2 is the gangue present in the iron ore Fe2O3.

ii) Slag:
Slag is a fusible chemical substance formed by the reaction of gangue with a flux.

Question 11.
Give the basic requirement for vapour phase refining.
Answer:

ii) As Al2O2 is a poor conductor cryolite improves the electrical conductivity.
In addition, crvolite serves as an added impurity and lowers the melting point of the electrolyte.

iii) First Iodine forms a Volatile tetraiodide with impure metal, which decomposes to give pure metal. Impure zirconium metal is heated in an evacuated vessel with iodine to form the volatile zirconium tetraiodide (Zrl4). The impurities are left behind, as they do not react with iodine.
Zr(S) + 2I2(S) → Zrl4(Vapour)

On passing volatile zirconium tetraiodide vapour over a tungsten filament, it is decomposed to give pure zirconium.
Zrl4(Vapour) → Zrl(S) + 2I2(S)

iv) Sodium cyanide acts as a depressing agent in froth floatation process. It prevent other metal sulphides from coming to the froth.
eg: NaCN depresses the floatation property ZnS present in Galena (PbS) by forming a layer of Zinc complex Na2[Zn(CN)4] on the surface of Zinc sulphide.

Question 13.
Explain the principle of electrolytic refining with an example. (PTA – 5)
Answer:

Question 14.
The selection of reducing agent depends on the thermodynamic factor: Explain with an example.
Answer:

Question 15.
Give the limitations of Ellingham diagram.
Answer:

Question 3.
Using the Ellingham diagram (fig 1.4) indicates the lowest temperature at which ZnO can be reduced to Zinc metal by carbon. Write the overall reduction reaction at this temperature
Answer:
Ellingham diagram for the formation of ZnO and CO intersects around 1200K Below this temperature, Carbon line lies above Zinc line. Hence ZnO is more stable than CO so the reduction is thermodynamically not feasible at this temperature range. However above 1200K carbon line lies below the zinc line, hence carbon can be used as a reducing agent above 1200K.
2Zn + O2 → 2ZnO ………………….. 1
2C + O2 → 2CO ………………….. 2
Reversing 1 and adding with equation 2
2ZnO → 2Zn + O2
2C + O2 → 2CO
2ZnO +2C → 2Zn + 2CO

I. Match the following
1.

1. The metal which shows high resistance to corrosion and used in the design of Chemical reactors is ___________ .
Answer:
Aluminium

2. ___________ are used for increasing the efficiency of the solar cells.
Answer:
Gold nanoparticles

4. ___________ is the process in which concentrated ore is strongly heated in the absence of air.
Answer:
Calcination

III. Find the odd man out.

1. a) Sphalerite b) Galena c) Azurite d) Iron pyrite
Answer:
c) Azurite. This is a basic carbonate ore others are sulphide ores.

2. a) Malachite b) Limonite c) Siderite d) Haematite
Answer:
a) Malachite. This is the ore of copper, others are ores of iron.

4. i) When an impure metal is melted and allowed to solidify, the impurities will prefer to be in the solid region.
ii) Zone refining is carried out in an inert gas atmosphere to prevent the reduction of metals.
iii) Elements such as germanium, silicon, and gallium are refined by zone refining.
a) i & ii
b) i & iii
c) ii & iii
d) i, ii, iii
Answer:
a) i & ii

1. Which of the following is not an oxide ore?
a) Cuprite
b) Siderite
c) Cassiterite
d) Zincite
Answer:
b) Siderite

6. Which of the following is a carbonate ore?
a) Limonite
b) Siderite
c) Magnetite
d) Haematite
Answer:
b) Siderite

7. Which of the following is the ore of iron?
a) Limonite
b) Azurite
c) Stefinite
d) Cerrusite
Answer:
a) Limonite

8. Which of the following is not an ore of iron?
a) Haematite
b) Magnetite
c) Siderite
d) Anglesite
Answer:
d) Anglesite

9. Which of the following is an ore of silver?
a) Azurite
b) Prousitite
c) Cerrusite
d) Limonite
Answer:
b) Prousitite

10. Which of the following is a sulphate ore?
a) Galena
b) Zinc blende
c) Cerrusite
d) Anglesite
Answer:
d) Anglesite

11. Non-metallic impurities, rocky materials, and siliceous matter which are associated with ores are called as.
a) Slag
b) Flux
c) Gangue
d) residue
Answer:
c) Gangue

15. In froth floatation sodium ethyl Xanthate is used as a
a) Collector
b) depressing agent
c) frothing agent
d) Flux
Answer:
a) Collector

20. Ammonia leaching is done for the concentration of the ore of
a) Silver
b) Copper
c) Aluminium
d) Zinc
Answer:
b) Copper

21. During roasting sulphide ores are converted into their
a) Metals
b) Oxides
c) Carbonates
d) nitrates
Answer:
b) Oxides

23. Sulphite ores of metals are usually concentrated by froth floatation process. Which one of the following sulphide ore offers an exception and is concentrated by chemical leaching.
a) Argentite
b) galena
c) Copper pyrites
d) Sphalerite
Answer:
a) Argentite

25. Thermodynamically the reduction of metal oxide with a given reducing agent can occur if the free energy change for the coupled reaction is
a) Positive
b) Negative
c) One
d) Zero
Answer:
b) Negative

28. In the Ellingham diagram, for most of the metal oxide formation the slope is
a) Positive
b) Negative
c) Zero
d) One
Answer:
a) Positive

29. Elements like Silicon and Germanium to be used as a semiconductor is purified by (PTA – 1)
a) heating under Vaccum
b) Van-Arkel method
c) Zone refining
d) Electrolysis
Answer:
c)Zone refining

30. If the e.m.f of the net redox reaction is positive, its G is
a) Positive
b) Negative
c) Zero
d) One
Answer:
b) Negative

31. Which of the following metal is refined by distillation?
a) Tin
b) Lead
c) Zinc
d) Bismuth
Answer:
c) Zinc

32. Which of the following is not refined by zone refining?
a) Germanium
b) Zirconium
c) Silicon
d) Gallium
Answer:
b) Zirconium

33. Which of the following is refined by the Mond process?
a) Silicon
b) Copper
c) Nickel
d) Zinc
Answer:
c) Nickel

34. Which of the following is defined by Van
Arkel method?
a) Gallium
b) Titanium
c) Germanium
d) Silicon
Answer:
b) Titanium

35. Which of the following metal is used in galvanization?
a) Copper
b) Aluminium
c) Zinc
d) Gold
Answer:
c) Zinc

38. Which is not refined by liquation?
a) Tin
b) Zinc
c) Lead
d) Bismuth
Answer:
b) Zinc. Zinc is refined by distillation.

Question 1.
What is a mineral?
Answer:
A naturally occurring substance obtained by mining, which contains the metal in a free state or in the form of compounds like oxides, sulphides, etc; is called a mineral.

Question 2.
What is an ore?
Answer:
A mineral which contains high percentage of metal, from which it can be extracted conveniently and economically is called an ore.

Question 4.
What is leaching?
Answer:
The process of dissolving metal present in an ore in a suitable solvent to form a soluble metal salt or complex leaving the gangue undissolved is called leaching.

Question 6.
What is acid leaching?
Answer:

Question 7.
What is the role of the depressing agent In the froth flotation process? (PTA – 1)
Answer:
When impurities such as ZnS is present in galena (PbS), sodium cyanide (NaCN) is added to depresses the flotation property of ZnS by forming a layer of zinc complex Na2[Zn(CN)4] on the surface of zinc sulphide.

Question 8.
In the extraction of metal, the ore is first converted into metal oxide before reduction into metal, why?
Answer:

Question 10.
Write about the extraction of metal by the process of reduction by carbon.
Answer:

Question 11.
Write about the extraction of metal by the process of reduction by hydrogen.
Answer:

Question 12.
Write about the extraction of metal by the process of reduction by metal.
Answer:

Question 14.
What is auto reduction of metallic ores?
Answer:

Question 15.
What is the role of graphite rods in the electrometallurgy of Aluminium? (PTA – 1)
Answer:
Electrolysis is carried in an iron tank lined with carbon which acts as a cathode. The carbon blocks immersed in the electrolyte acts as a anode.

Question 16.
Write about the distillation process of refining a metal?
Answer:
In this method, impure metal is heated to evaporate and the vapours are condensed to get pure metal.

This method is used for low boiling volatile metals like zinc and mercury.

Question 17.
Write about the liquation process of refining a metal?
Answer:

Question 18.
Write the applications or uses of copper.
Answer:

Question 19.
Write the applications or uses of gold.
Answer:

In this method, the metalic ore particles which are preferentially wetted by oil can be separated from gangue.

Question 2.
What is cyanide leaching?
Answer:

Question 8.
Write the observations from the Ellingham diagram.
Answer:

Question 10.
Write the applications or uses of aluminium.
Answer:

Question 11.
Write the applications or uses of iron.
Answer:

Question 12.
Out of coke and CO, which is a better reducing agent for the reduction of ZnO? why? (PTA – 2)
Answer:

Question 2.
How is copper extracted from its ore. (PTA – 5)
Answer: