I. Choose the correct answer.
1. Which system was called by different names like Jagirdari, Malguzari and Biswedari etc.?
a) Mahalwari
b) Ryotwari
c) Zamindari
d) None of these
Answer:
c) Zamindari

3. What was the Mahal in the Mahalwari system?
a) House
b) Land
c) Village
d) Palace
Answer:
c) Village

4. In which region was the Mahalwari system imposed?
a) Maharashtra
b) Madras
c) Bengal
d) Punjab
Answer:
d) Punjab

6. In which region was the Ryotwari system not introduce by the British?
a) Bombay
b) Madras
c) Bengal
d) None of these
Answer:
c) Bengal

II. Fill in the Blanks:
1. ……………. is the modified version of the Zamindari system.
Answer:
Mahalwari Settlement

4. The Punjab land alienation Act was passed in 1918.
Answer:
False

2. What were the salient features of the Ryotwari system?
Answer:

5. What was the contribution of Mahatma Gandhi on Champaran Satyagraha.
Answer:

6. Mention the role of Vallabhai Patel in Bardoli Satyagraha.
Answer:

VII. Answer the following in detail.
1. Discuss the merits and demerits of the Permanent Settlement.
Answer:
Merits:

3. Write a paragraph about the Moplah Rebellion?
Answer:
Moplah Rebellion (1921):
1. The Muslim Moplah (or Moplah) peasants of Malabar (Kerala) were suppressed and exploited by the Hindu zamindars (Jenis) and the British government.

2. This was the main cause of this revolt.

3. The Moplah peasants got momentum from the Malabar District Conference, held in April 1920.

4. This conference supported the tenant’s cause and demanded legislation for regulating landlord-tenant relations.

5. In August 1921, the Moplah tenants rebelled against the oppressive zamindars. In the initial phase of the rebellion, the Moplah peasants attacked the police stations, public offices, communications and houses of oppressive landlords and moneylenders.

6. By December 1921, the government ruthlessly suppressed the Moplah rebellion.

7. According to an official estimate, as a result of government intervention, 2337 Moplah rebels were killed, 1650 wounded and more than 45,000 captured as prisoners.

VIII. HOTS:
1. Apart from the exploiting through taxes, how did the British further exploit the land?
Answer:
Apart from the taxes, the British followed the policy of commercialization of Agriculture which was a major setback for Indian farmers. They were forced to grow the soil fertility deteriorating cash crops such as opium. Jute, Indigo, etc., Agricultural prices shot up by 31%. They were threatened if they failed to grow these crops.

II. Fill in the Blanks.
1. Indian economy was predominantly an …………….. economy.
Answer:
Agrarian

6. In Mahalwari settlement, the tax was collected through ………………
Answer:
Lambardar

8. …………….. Bengali drama to draw the misery of the indigo – cultivators.
Answer:
Siddhu and Kanhu

15. In the permanent settlement system, the zamindars would grant to the ryots.
Answer:
Patta

3. Champaran has situated in the state of Bihar.
Answer:
True

4. The first revolt which can be regarded as a peasants revolt was the Santhal Rebellion in 1855 – 1656.
Answer:
True

5. In 1876, the peasants revolted in the district of Poona in the Deccan Riots.
Answer:
False

VI. Answer the following in one or two sentences.
1. What are the three major land revenue systems introduced by the British in India? Who made that system.
Answer: 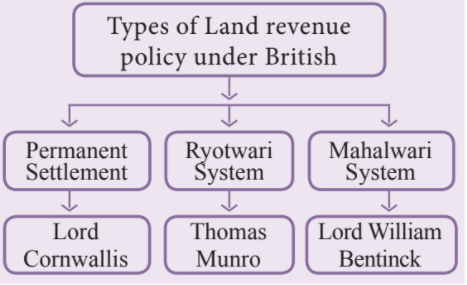 2. What are the salient features of the Mahalwari settlement?
Answer:

2. The land near the hills of Rajmahal in Bihar was cultivated by the Santhals.

3. The landlords and money-lenders from the cities took advantage of their ignorance and began grabbing their lands. This created bitter resentment among them leading to their armed uprising in 1855.

4. Consequently, under the belief of divine order, around 10,000 Santals gathered under two Santhal brothers, Siddhu and Kanhu, to free their country of the foreign oppressors and set up a government of their own.

5. The rebellion assumed a formidable shape within a month. The houses of the European planters, British officers, railway engineers, zamindars, and moneylenders were attacked.

6. The rebellion continued till February 1856, when the rebel leaders were captured and the movement was put down with a heavy hand.

7. The government declared the Parganas inhabited by them as Santhal Parganas so that their lands and identity could be safeguarded from external encroachments.