What are the life lessons that you can learn form the birds? Match the birds with the characters given in the box and fill in the blanks. 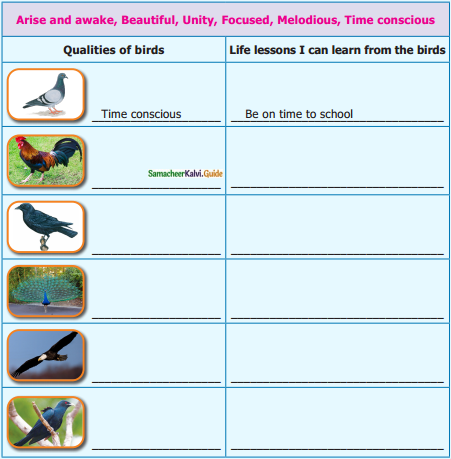 A) Choose the correct synonyms for the italicized words.

3. The mother consoled her little girl.
a) pretended
b) comforted
c) left
Answer:
b) comforted

4. You are always self-centered.
a) egoistic
b) generous
c) heroic
Answer:
a) egoistic

5. What is the secret you are whispering?
a) rumour
b) murmur
c) louder
Answer:
b) murmur

B) Find the antonym for the following words.

C) Fill in the blanks.

D) Say the following statements are True or False:

1. Two sparrows built a nest on a treetop.
Answer:
False

3. Ramayya gave the diamond jewel to the magistrate.
Answer:
False

4. Ramayya’s wife put the stud away in her box.
Answer:
True

6. What happened to Ramayya’s wife at the end?
Answer:
Ramayya’s wife fell sick with a fever. She became bedridden. Her rest of the life was spent in fear of being caught by the police.

F) Answer the following in about 100 words.

1. Why did the sparrow throw the nose jewel into Ramayya’s house?
Answer:
One day, the male sparrow found a diamond nose-jewel in a heap. He picked it up and came to the nest with the shining stud in his beak and informed his wife about it. The female bird shouted at him and told him that the diamond jewel was not of any use to her. She asked the male sparrow to search for food for their young ones. So the bird dropped the diamond stud on the floor and went out in search of little worms for the young ones.

2. Explain how Ramayya’s wife reacted when she saw the nose jewel?
Answer:
When Ramayya’s wife noticed the jewel as she was sweeping the floor, She picked it up with delight and wore it. Ramayya questioned her angrily how she got hold of the diamond stud. She replied that she found the jewel lying on the floor and she took it. That was all. Ramayya wanted to deliver the jewel to the village magistrate. If the police searched their house, it would be a disgrace. Police searched the house of Kuppayi, the servant-maid but they could find nothing in her hut. Wife of Ramayya got scared. She soon developed a severe fever and was confined to her bed. Ramayya and his wife spent the rest of their lives in fear of being caught.

a. Pick out the correct homophone.

4. He will play the in the second play, (role, roll)
Answer:
role

b. Choose the correct homophone. (Text Book Page No. 8) C) Listen to the passage carefully and choose the right answer:
Note: The listening passage is given at page no. 226

4. Young birds perfect their songs by ………….
a) territorial songs
b) mating songs
c) warnings
d) None of the above
Answer:
c) warnings

Note: The Listening passage is given on page no. 226.

Using the given letter as a model, write a complaining letter on any one of the topics given below: (Text Book Page No. 15)

a) To the Police commissioner about the noise caused by the loudspeaker in a music shop near your school.

b) To the Postmaster General on non-receipt of book parcel.

c) To the Transport Manager, TNSTC on non-stopping of buses near your school bus stop.

Using the given informal letter as a model, write a letter on any one of the topics given below. (Text Book Page No. 16)

a) Write letter to your father asking permission to go on an educational tour.

b) Write letter to you friend about your summer holidays.

c) Write a letter to your sister advising her to take part in cultural programs in school’s annual day celebration.

a. Pick out the words from the list and put them appropriately on the table. (Text Book Page No. 18)

b. Read the following paragraph and pick out the different types of nouns and put them in the table.

Hobby is an activity we enjoy doing in our free time. It keeps us busy in our leisure time. People choose their hobby on the basis of their interests and personality. Do you know what Dr. A.P.J. Abdul Kalam’s hobby was?

a. Change the underlined words with a correct pronoun: (Text Book Page No. 20)
(they, he, him, it, she )
1. I saw Mr. Balu this morning and gave Mr. Balu my homework.
Answer:
him

3. My aunt lives in Trichy but, my aunt often comes to visit my family.
Answer:
she

2. She missed her purse.
Answer:
The missed purse is hers

3. Her speech is nice.
Answer:
Nice speech is hers

4. My book is new.
Answer:
The new book is mine

5. My bike is costly.
Answer:
The costly bike is mine

List out the transitive and intransitive verbs in the following words. (Text Book Page No. 21)

The Nose-Jewel Summary in English

Ramayya, a simple man, lived with his greedy wife. In his house, there was a sparrow nest. The male sparrow in the nest picked up a nose-jewel and dropped it on the floor. The wife of Ramayya noticed the jewel and took it. Meenakshi Ammal, the owner of the nose-jewel, gave a police complaint. She suspected Kupayi, the maid. The police came and searched for her hut. The wife of Ramayya fell sick. Ramayya and his wife lived in fear for ever.

The Nose-Jewel Summary in Tamil

The Nose-Jewel About the Author in English 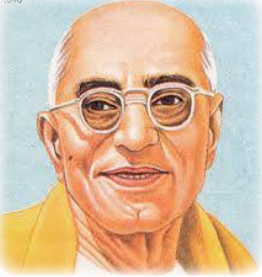 Chakravarti Rajagopalachari (1878-1972) informally called Rajaji, was an Indian politician, independence activist, lawyer, writer, historian, and statesman. Rajagopalachari was born in the village of Thorapalli in the Krishnagiri district. Rajagopalachari was the last Governor-General of India, as India soon became a Republic in 1950. Furthermore, he was the first Indian-born Governor-General, since before him the posts were held by British nationals. He also served as leader of the Indian National Congress, Premier of the Madras Presidency, Governor of West Bengal, Minister for Home Affairs of the Indian Union, and Chief Minister of Madras state. He was one of the first recipients of India’s highest civilian award, the Bharat Ratna.

The Nose-Jewel About the Author in Tamil